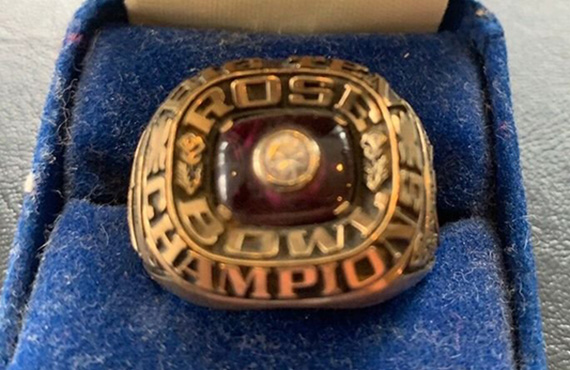 Former Ohio State linebacker and current FOX Sports color analyst Chris Spielman is conducting an auction of his personal memorabilia collection in an attempt to raise $40,000 for those impacted by the coronavirus outbreak.

Among the first items for bid on eBay were Spielman’s 1984 Big Ten championship ring, his 1994 All-Madden Team leather jacket and autographed game-worn jerseys from his time with the Buffalo Bills and Detroit Lions. The ring sold for $12,000, the jacket sold for $2,718 and the Bills jersey sold for $1,125, while the Lions jersey — which is paired with his 1994 Pro Bowl watch — remains open for bids through April 6.

$1125 was winning bid AMAZING plus @NickFoligno captain of #CBJ is going to match. Once again proving “what u give will grow what u keep u lose” #GodsGifts pic.twitter.com/BuiXaONZqw

Spielman’s goal of $40,000 is the combination of the word “quarantine” — which originates from “quarantena,” the Venetian word for 40 days and the time that all ships were required to be isolated before crew could come ashore during the Bubonic Plague — and the length of Lent, the Christian period of preparation for Easter.

“If I’m going to talk about the importance of sacrificial giving, then I have to sacrificially give,” Spielman said on his ‘We Tackle Life’ podcast. “Some of this stuff means a lot to me. It’s not easy to sell it. But if it can buy groceries for a family for a week or a month, that’s more important than it sitting on my mantle. It can serve a bigger purpose off the mantle.”

Spielman,  a two-time All-American and Lombardi Award winner during his time with the Buckeyes (1984-87), has been paying it forward for a few weeks now, as he initially awarded $100 checks to eight people impacted by the spread of the virus, which has since grown to four $250 checks each week. He plans to sell more items in the coming weeks, including game-worn Ohio State gear and other related jewelry.