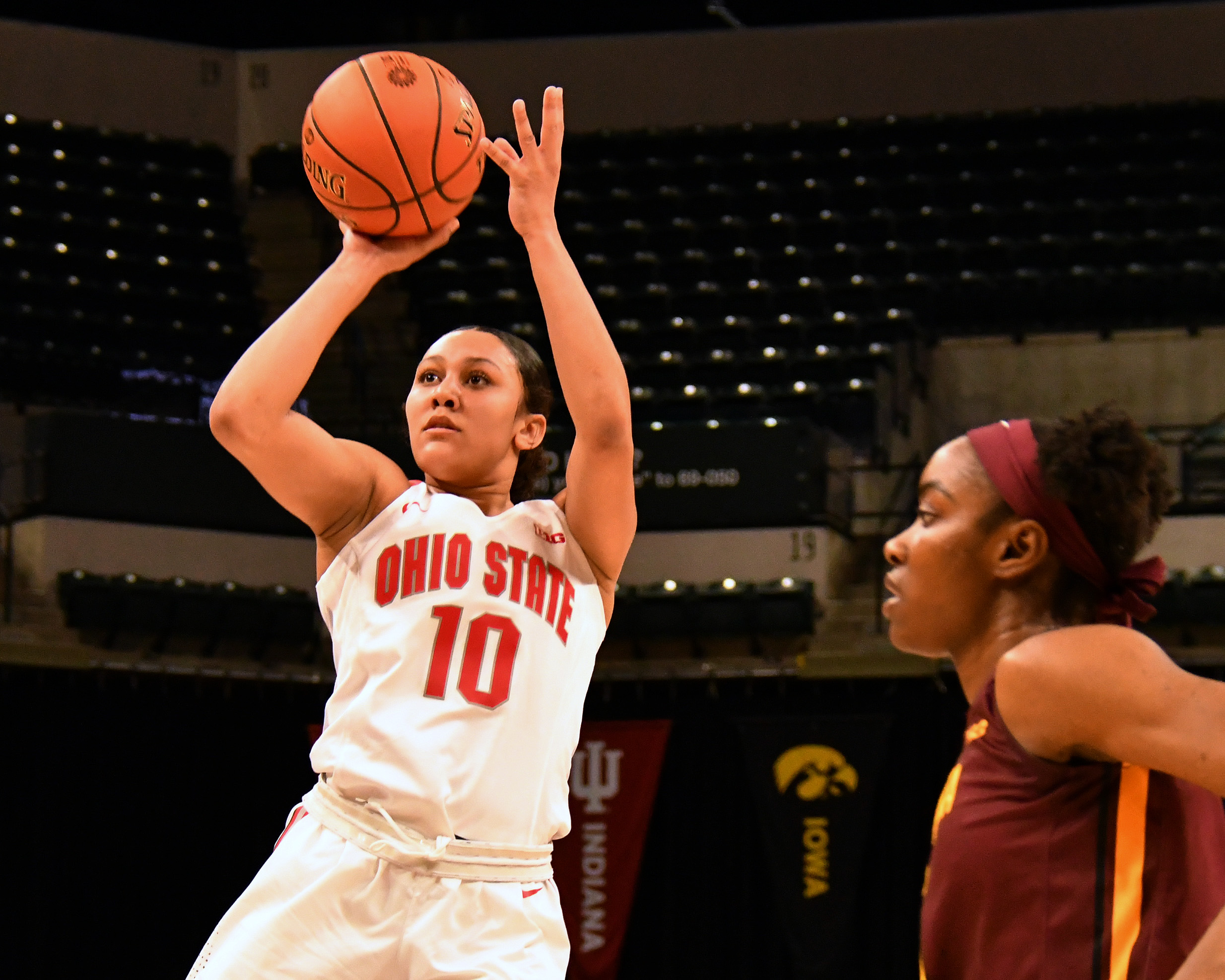 As part of end-of-the-season women’s basketball coverage, Buckeye Sports Bulletin will be looking at the previous year of every returning player for Ohio State heading into the 2020-21 campaign, and their importance to the future of the Buckeyes. Last in the series is guard Braxtin Miller.

At the beginning of the 2019-20 season Ohio State’s roster consisted of seven freshmen, three sophomores, one junior and two seniors.

One of those seniors, Jensen Caretti, left the university mid season, and the other, Savitha Jayaraman, played a total of one minute all season long.

That left one upperclassmen in Braxtin Miller, a transfer guard from Oklahoma State who was not given immediate eligibility until two days before Ohio State’s first game of the season.

While Miller was not the most efficient shooter at Oklahoma State, she led the team both seasons in three-point makes, finishing with a combined 105 made shots from deep in her two seasons.

In her sophomore year, Miller also blossomed into a stronger passer, going from 69 assists as a freshman to 104 in year two, while ending her time at Oklahoma State with a total of just 108 turnovers.

And in her first year with Ohio State, Miller brought that playmaking to another level, finishing atop the team with 114 assists, with that total also being good for ninth in the Big Ten. Even further, Miller reached that number while turning the ball over just 46 times, giving her a 2.5 assist-to-turnover ration that was the best in the conference.

Miller was also a tremendous defender for the Buckeyes, finishing with 59 steals, seventh in the Big Ten. As the season progressed, it was obvious, despite it being her first season in Columbus, that Miller’s experience made her a leader on the court, and her poise on both sides of the court was infectious for much fo this young Ohio State team.

Where Miller struggled was with her shooting. The junior guard shot 32.6 percent (94 of 288) from the field and 25.0 percent (26 of 104) from deep, the latter of which was a significant drop from her time at Oklahoma State.

Despite this, Miller did manage to average 8.2 points per game on the year, fourth on the team, and had some highlight performances for the Buckeyes. Her season high came in the second game of the year, where Miller put up 18 points on 7-of-11 shooting in an overtime win against Cincinnati. She also added five rebounds and four steals in that Nov. 13 victory.

She also came up big in Ohio State’s other overtime win, putting up 17 points in the comeback road win over Nebraska on Feb. 2. There, she shot 5 of 12 and brought in four rebounds while dishing out four assists.

Despite being the least effective shooter on the field for Ohio State last season, Miller remained immensely important for the Buckeyes in every other facet of the game.

Her defense might have been the best on the team, and her leadership and ability to slow the game down and get a youthful team into its offense was important time and time again.

And, despite the shooting numbers, Miller had multiple clutch plays, including in those overtime wins and with the steal and free throws that she hit late against Rutgers.

Miller was relied on for a whole lot due to being the lone junior, and that was clear by being the only player to break the 1,000-minute threshold (1,039) for the season.

Some of the shooting struggles could potentially be explained by a lingering shoulder injury that showed up at different points of the season, though Miller never used it as an excuse in postgame interviews.

The 2020-21 season will be Miller’s last, and, with the departure of players like Kierstan Bell and Janai Crooms, there is an opportunity for her to become a high-volume scorer and take on more of that role than ever before.

Efficiency will continue to be a major focus for Miller, but if she can get her percentages even into the mid-to-high 30s, she will be a dangerous player for Ohio State, and one that will truly be strong in every single facet of her game.