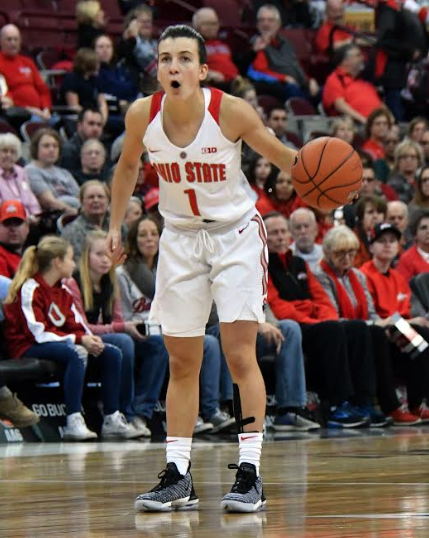 After the Ohio State women’s basketball team downed North Carolina last Thursday, the Buckeyes picked up where they left off Sunday with their 69-56 win over Cincinnati at Value City Arena in Columbus.

For the fourth time in five games, freshman forward Dorka Juhasz, who paced the Buckeyes (3-2) with 17 points and 13 rebounds, posted a double-double performance. Graduate guard Adreana Miller, who transferred from La Salle in the offseason, added 11 points on 4-of-7 shooting with a 3-for-4 clip from long rangeand went over 1,000 career points.

“We’re showing that the progress is there,” said fifth-year senior forward Makayla Waterman, who added nine rebounds and a career-high six assists to go with five points on 2-of-3 shooting. “(Beating North Carolina) meant a lot to us. It gave us a lot of momentum.”

OSU shot 53.1 percent (26 for 49) from the field and and drilled 7 of 15 three-pointers (46.6 percent), offsetting an otherwise cold margin on free throws. The 10-for-24 mark from the charity stripe left a bad taste for head coach Kevin McGuff.

“We kept making mental mistakes, not making them pay at the free-throw line,” McGuff said. “Overall it’s good. I’m happy we won. I thought we had some really good stretches. We just really didn’t sustain it for long enough today. It was mostly mental stuff.”

The Bearcats (5-4) secured the opening tip, but a miss led to the Buckeyes going the other way and getting on the board first when graduate guard Carmen Grande, who pitched in the first of a game-high eight assists, from the right wing and found Juhasz running baseline for a layup 22 seconds in. Adreana Miller’s three-point play 21 seconds later extended the early edge to 5-0. UC’s drought ended at the 8:39 mark on a layup and free throw after the foul for Sam Rodgers, who paced the visitors with 14 points, but OSU went on an 11-1 run, starting on Juhasz’s layup at the 8:02 point and ending at Grande’s three-pointer with 5:12 left in the first quarter.

Cincinnati answered with a 4-1 spurt on layups from Antoinette Miller (10 points) at the 4:23 mark and Angel Rizor (seven points) just 18 seconds later, between Waterman’s 1-for-2 trip to the free-throw line, but Waterman’s bucket at the 3:25 point sparked a 6-0 run culminated by layups from graduate guard Najah Queenland (two points) and freshman forward Aaliyah Patty (10 points) as Ohio State led 22-8 with 2:24 to go. The Bearcats closed out the period’s final 2:01 on a 7-4 edge, capped by a baseline layup from Florence Sifa, who contributed five points, but the Buckeyes held a double-digit advantage at 26-15 into the break.

UC kept pace with OSU to start the second quarter, scoring first on Iimar’i Thomas’ layup 30 seconds in. Juhasz’s jumper at the 8:36 mark provided Ohio State’s response, but Thomas added a bucket at the 7:47 point to bring the game back into single digits at 28-19.

“I knew I had to come out today, be strong and play ball,” said Juhasz, who dropped 13 points and grabbed seven boards in the first half.

The rest of the way, though, Ohio State opened the margin back up. The Buckeyes began a 13-5 run to end the period on graduate guard Carly Santoro’s 1-for-2 trip to the free-throw line at the 7:22 point, followed by Adreana Miller’s triple at the 6:40 mark to make it 32-19. Santoro chipped in 10 points despite 3-of-9 shooting.

UC came back with buckets from Antoinette Miller and Sifa, but OSU answered on three straight layups — Patty, junior guard Jensen Caretti and Juhasz — for a 38-23 lead with 2:11 left. After Sifa’s free throw with 1:52 to go, Waterman’s layup with and Caretti’s free throw in the final minute gave Ohio State its largest lead of the first half up 41-24 against Cincinnati into the locker room.

“I thought in the first half we played with good pace,” McGuff said. “We really had great ball movement, which led to excellent shots. … The assists (12) were really up at half because we were moving the ball so well, but the second half we kind of got bogged down and we quit moving the ball. We took some early questionable shots in the shot clock and it just wasn’t good from a mental standpoint.”

The Buckeyes started the second half where they left off, opening the third quarter on an 8-4 spurt to go up 28-26 for their largest lead all game at the 7:35 mark, starting on Juhasz’s jumper 32 seconds in and culminating with Santoro’s 1-for-2 trip to the free-throw line. UC clawed back, though, shortening the double-digit deficit to 55-42 with a 16-6 run through the period’s final 6:09.

Cincinnati’s spurt spilled into the fourth quarter, where the Bearcats continued to climb out of the hole with the period’s first bucket 37 seconds in via Antoinette Miller. Ohio State went up 59-44 with 8:20 left in the game after Adreana Miller’s triple seemed to seize back the momentum, but the Buckeyes allowed UC to score the next 12 points and cut the margin to 59-56 with 2:55 to go.

“Coach McGuff was trying to emphasize, just because you win, you’ve still got to get better each game,” Waterman said. “Throughout the second half, we kind of just let go and eventually said, ‘Listen, they’re a great team. They’re not going to go away.’ So we had to keep fighting.”

Caretti, who finished with nine points on 3-of-3 shooting and went 2 for 2 from downtown, gave OSU a jolt down the stretch with her two triples. She hit the first at the 2:46 mark to make it 62-56 for breathing room and the second at the 28-second point for the 69-56 dagger.

“She did a great job,” McGuff said. “I thought she played within herself. Every shot she made was a good shot. There’s something to be said for that because sometimes we can start taking bad shots, but she took good shots, she capitalized on them and we needed it. She was really big down the stretch.”