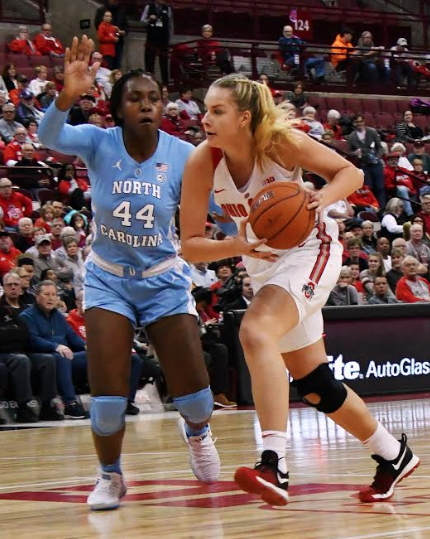 Ohio State went 18 days without a women’s basketball game and its layoff initially showed on Thursday at Value City Arena where the Buckeyes fell behind 14 points through the first few minutes before clawing back, retaking the lead in third quarter and taking down the Tar Heels 76-69 in the ACC/Big Ten Challenge.

In the win, graduate guard Carmen Grande gave OSU (2-2) a team-high 23 points on 7-of-15 shooting (3-of-6 three-pointers), grabbing eight rebounds and dishing six assists. Freshman forward Dorka Juhasz added a double-double, her third in four games, pitching in 18 points and bringing down a game-high 16 boards to highlight the Buckeyes’ one-two punch.

“We were hungry for a game,” Juhasz said. “That’s why I think this win came from that. We were ready. We just wanted to play.”

The Tar Heels (5-3) jumped out to a 7-0 lead in the first 1:53, started by a pair of free throws from Janelle Bailey, who had 11 points and nine rebounds, with Shayla Bennett’s three-point play and Taylor Koenen’s free throws before fifth-year senior forward Makayla Waterman’s free throws at the 7:48 mark put the Buckeyes on the board. UNC went back down the court as Stephanie Watts, who scored a team-high 15 points, knocked down the team’s first triple, followed by Koenen’s jumper at the 7:13 points to put OSU down 12-2 before head coach Kevin McGuff took a timeout two seconds later.

“I just think with that 18-day layoff, it was kind of catching up to us a little bit,” McGuff said. “We looked a little out of sync and out of rhythm, and kind of wanted to get us settled down but still looked a little timid. Got some shots around the basket that we didn’t really go up aggressively and therefore didn’t finish. But once we did that and settled down, I thought we played pretty good.”

Out of the break, North Carolina piled on the points with a 4-0 spurt into the 6:24 mark behind layups from Watts and Bailey to bury Ohio State in a 16-2 hole. Graduate guard Carmen Grande got the Buckeyes to roar back on a 16-5 run to end the first quarter, starting on her three-pointer at the 5:52 point and culminating on freshman forward Aaliyah Patty’s layup with 36 seconds left to trim the Tar Heels’ lead to 21-18 into the intermission.

OSU stayed alive as its fight spilled into the second quarter, where Grande drilled another triple and tied the score at 21-21 only 18 seconds in. UNC answered with a 4-0 spurt into the 6:40 mark behind Bailey’s layup and Koenen’s free throws, but on consecutive possession, graduate guard Carly Santoro’s jumper and Waterman’s layup brought the score back to 25-25 at the 5:51 point.

With less than five minutes to go in the second quarter, North Carolina and Ohio State traded buckets between layups by Bennett and Patty to tie again at 27-27 as 4:12 remained. Then the Tar Heels took off on 6-2 spurt in the final 2:35 of the period as the Buckeyes trailed 33-29 at halftime.

When action resumed, OSU caught fire and took its first lead of the game. Santoro got Ohio State started, scoring the Buckeyes’ first five points on a layup and the foul before adding a put-back bucket on the ensuing possession to give OSU its 34-33 edge at the 7:51 point. She rounded out her team’s double-digit scorers with 11 points on 5-of-12 shooting, pulling down nine rebounds.

Ohio State answered, though, eventually ending the period on a 14-7 run in the final 4:21 — started by Grande’s layup and ending with two free throws from her — to put the Buckeyes ahead of the Tar Heels by a bucket, 53-51, into the fourth quarter.

“She is capable,” McGuff said of Grande taking over the game. “I see her find her stride a little bit. It seems like she’s getting more comfortable her with what we’re doing. Certainly, she played great tonight.”

OSU maintained its lead 16 seconds into the period when Santoro’s jumper in the paint extended the margin to 55-51. Kea’s jumper responded on the other end, but Waterman’s layup at the 8:55 mark gave Ohio State an answer.

As they did most of the night, the teams traded baskets before the Buckeyes started to create some separation, going up 61-56 on Grande’s baseline feed to Juhasz for the layup with 6:22 left. OSU started to pull away with 4:05 left when Grande splashed a baseline jumper and graduate guard Najah Queenland added a layup on the ensuing possession, pushing its lead to 66-60 with 2:59 remaining.

Juhasz went down for a moment with left leg cramps after her layup with 1:46 left gave Ohio State a 68-63 lead, but she returned moments later. North Carolina knocked down triples from Watts and Kea, with Santoro’s layup at the 39-second mark in between, but the Buckeyes salted away the 76-69 win over the Tar Heels after a pair of free throws each from Grande and graduate guard Adreana Miller.

“We still have a lot to get better at, but we got better today,” said Grande, who looks for another victory Sunday when the Buckeyes host Cincinnati (5-3) on Sunday at 2 p.m. “That’s our main focus, getting better, and I think we played with a lot of effort. Going with a win, you just keep it rolling, and we’re going to keep it rolling.”