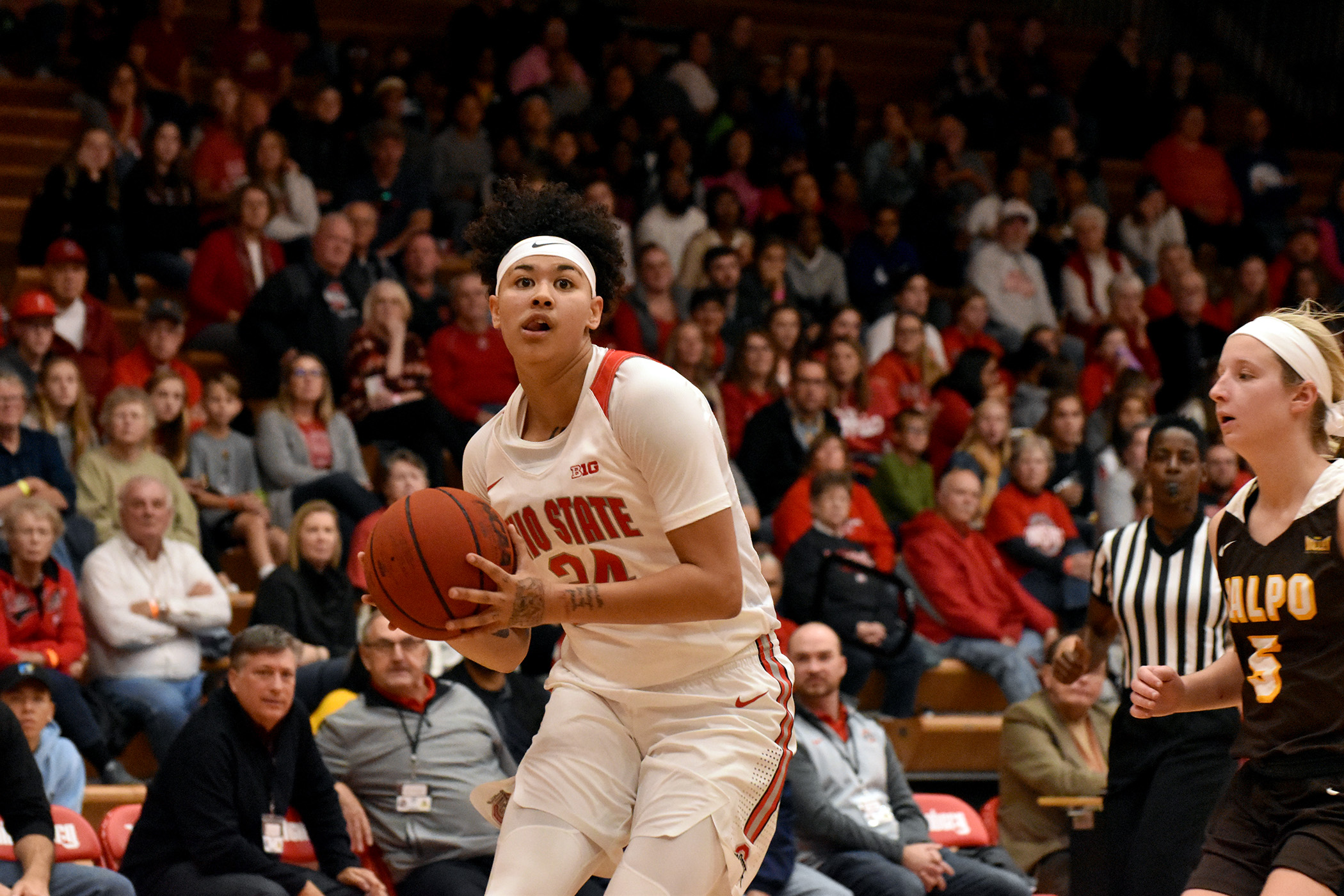 After rolling to an 81-point win in its exhibition game, Ohio State kept the hot streak moving into the regular season, thoroughly dominating Valparaiso 89-38 in the Buckeyes season opener.

Playing in Springfield, Ohio as a part of the Ohio Basketball Hall of Fame Classic, the Buckeyes started out slow, but began to take control in the second quarter before outscoring the Crusaders by 27 in the third quarter to really put the game away.

“I was certainly anxious to kind of see how we’d be, with so many new people, we’re a big work in progress,” Ohio State head coach Kevin McGuff said. “I thought overall we played really hard today, we played together, we did a lot of positive things. We have a long, long, long way to go, at least I think you can kind of see where this could go.”

Sophomore forward Dorka Juhasz led all scorers with 16 points on 4-of-6 shooting while also bringing in a team-high seven rebounds.

Four Buckeyes scored in double figures, and all 10 Ohio State players that saw game action managed to hit a basket in the 51-point victory.

On the whole the Buckeyes shot 52.2 percent from the floor and 33.3 percent from three, hitting 8-of-24 attempts from behind the arc. Juhasz and freshman guard Kierstan Bell each hit two of those shots from deep, both going two for four on their attempts.

Bell scored all 10 of her points in the first half and added three rebounds, an assist and a block.

Ohio State did not start out as hot as it did in the Urbana exhibition, scoring only 15 points in the first quarter and leading by just four points over Valpo through the first 10 minutes, riding Bell’s seven points as the primary scoring threat.

McGuff said the problems early came from some jitters and the desire to play too fast.

“One of the things that we do is we try to make a play in the first five seconds of the shot clock on either end, and especially defensively, we kind of settled down and kind of stuck to the plan, and a much better job in the second half,” he said. “In the beginning we were just real anxious, going for steals and getting beat off the dribble, and once we kind of got that going, it allowed us to get some stops, get some steals, get in transition, and everything else kind of fell into place at that point.”

A 25-11 second quarter gave the Buckeyes a 40-22 advantage at halftime, with Juhasz and Bell leading the way with 11 and 10 points apiece.

The Buckeyes took that 18-point lead and turned it into a rout on the back of a 20-0 run in the third quarter. On the whole, Ohio State outscored the Crusaders 31-4 in the third and took a 71-26 score into the final frame before eventually taking the 89-38 win.

Ohio State held Valparaiso to 23.1 percent shooting and allowed only two made three pointers on 25 attempts while the Crusaders committed 25 turnovers.

The Buckeyes made those turnovers into 32 points, while also outscoring Valpo 54-20 on points in the paint. Nearly half the scoring, 44 points, came from the bench.

After starting the season off with a victory, Ohio State moves on to play Cincinnati on the road Wednesday.