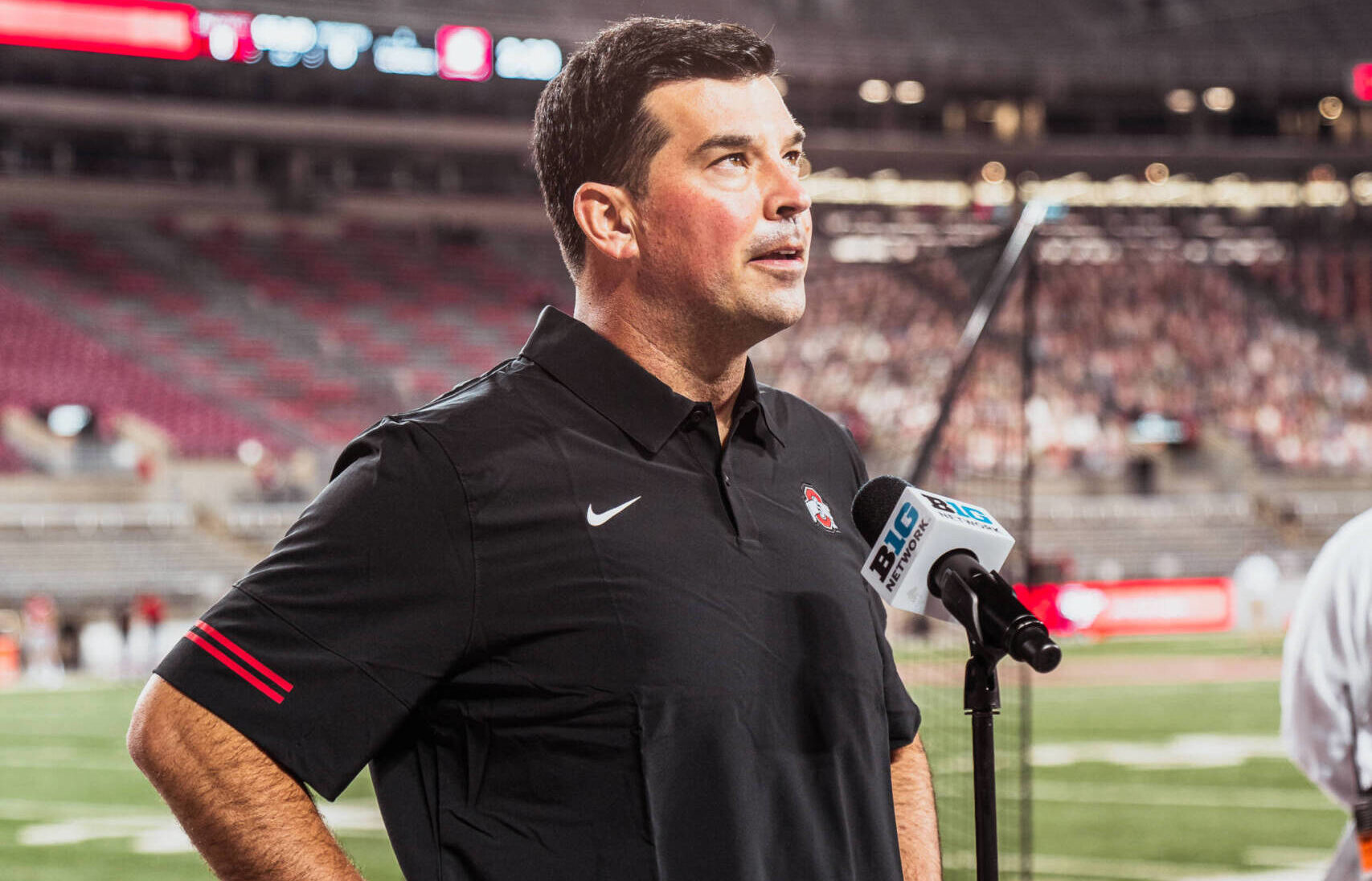 As August draws nearer, so do the times when the sounds of pads colliding and whistles blowing can be heard outside the Woody Hayes Athletic Center in Columbus.

Ohio State football returns to the gridiron this season as one of college football’s premier teams. The Buckeye offense will feature Heisman Trophy frontrunner C.J. Stroud and preseason All-Americans TreVeyon Henderson and Jaxon Smith-Njigba. At the same time, the defense returns the likes of Denzel Burke, Zach Harrison and Josh Proctor.

The excitement for a football Saturday inside the Horseshoe is palpable. Ahead of the Buckeyes’ season-opening contest with the Fighting Irish on Sept. 3, Buckeye Sports Bulletin spoke with InsideND and Rivals reporter Tyler James to discuss where the Notre Dame program stands a few short weeks away from kick-off.

James feels a newfound enthusiasm for college football in South Bend, Ind., despite long-time head coach Brian Kelly leaving to coach Louisiana State. With Marcus Freeman entering his first year as leader of the program and former Notre Dame quarterback Tommy Rees retaining his role as offensive coordinator, a youth movement has begun. The Fighting Irish are ready to prove that their success will last beyond Kelly’s tenure.

Freeman inherits a team with 13 returning starters, including seven on offense and six on defense. Tight end Michael Mayer will be a focal point of the offensive attack as the projected No. 1 tight end taken in the 2023 NFL Draft, while defensive lineman Isaiah Foskey and Jayson Ademilola will look to create havoc for the Notre Dame defense.

“It’s certainly an exciting time for Notre Dame fans because of the transition from Brian Kelly to Marcus Freeman,” James told BSB. “He’s brought a lot of energy into the program. It had a lot of success under Brian Kelly because he improved the program’s ceiling to have fans thinking they could win a national championship. Freeman has fans thinking the same thing. He comes in as someone who recruits at a high level and can bridge the gap between Notre Dame and other top-tier teams.”

Building that bridge won’t come easy for Freeman. According to James, Notre Dame has a high ceiling and a low floor ahead of the 2022 season.

“This season, there is a lot of potential for Notre Dame, but there are also a lot of question marks,” James said.

In the summer, one of those question marks was at quarterback — the most important position in football. None of the returning signal-callers have much experience. Sophomore Tyler Buchner played a niche role as a run-first quarterback last season, while junior Drew Pyne’s reps came against Wisconsin and Cincinnati.

Both quarterbacks have much to prove. Buchner’s injury history, including a season-ending injury in high school, remains a concern for the Notre Dame coaching staff, and Pyne’s bumpy spring practices raise questions about his dependability. Still, James believes Buchner’s stature and versatility provide him a slight edge over his counterpart.

“Buchner is only a sophomore, and (reporters) believe he will be the starter. He was a highly-rated recruit and has untapped potential,” James said. “Buchner had some playing time as a freshman as a change of pace quarterback with a running option. Playing at Ohio State under the lights isn’t the best place to get your first start. He will be tested.”

James believes the entire team, not just Buchner, will be tested when the Irish travel to Columbus on Sept. 3. However, he said Notre Dame will appreciate the season-opening battle with the Buckeyes more with each passing week in the 2022 season.

“The Notre Dame coaching staff will get a sense of where they are at immediately,” James said. “I don’t know what the game will tell us about Marcus Freeman and the trajectory of his era as head coach because he’s really just getting started, but I think he’ll learn a lot about his team and how far they can go this year.”

James said the Marcus Freeman era has been defined thus far by his work on the recruiting trail. After all, Freeman’s only head coaching experience was as an interim against Oklahoma State in the Fiesta bowl — a game Notre Dame lost 37-35.

According to the 247Sports Composite rankings, Ohio State holds the No. 1 class for 2023 with Notre Dame at No. 2. The programs have traded the top spot on the list several times this summer, seemingly trading the crown every time a recruit commits to their school.

The Irish’s standing in national recruiting is a true sign that times are changing in South Bend. Freeman, offensive coordinator Tommy Rees and defensive coordinator Al Golden have put all their chips on the table to land five-star and high four-star talent — the same recruits that would have ended up at Ohio State, Alabama, Georgia and Clemson only a few years ago.

“He’s a genuine person that understands the situations he’s being put in,” James said of Freeman. “He has a good sense for people, which sets him apart as a recruiter. The athletes see a former player — a prominent former player at a prominent school — and that comes off well to players. There’s something about him that gives recruits awe. He can go into any room and impress people and do it in an authentic way that causes people to gravitate toward him.”

James believes Freeman’s personality will also translate to positive results on the football field. The way Freeman’s players believe in him could lead Notre Dame to shock the college football landscape, perhaps even with a Week 1 win over Ohio State, though he’s not betting on that right now.

For Notre Dame to accomplish that feat, James said it must rely on its defense.

“There are high expectations for that defense,” he said. “If Notre Dame is going to have a successful season, it’s because that defense lives up to those expectations and has players step up. Maybe some of the positions that you think might have weaknesses — like the secondary, for example, which was terrible against Oklahoma State in the bowl game — can be covered with other areas. They will need to stop the pass this season, especially against Ohio State in the opener. If Freeman and Golden can work together, the team will be a good place.

“Ohio State can do a lot of things well offensively, so they will challenge this defense and put them to the test. There’s a lot of excitement to see how things turn out in that game.”

As for predictions, James will need more time to see the product Notre Dame puts on the field during fall camp. In fact, BSB will need some time for predictions, too. As the game approaches, Buckeye Sports will continue working on its Preseason Preview, which will be released to subscribers at the end of August.

In the Preseason Preview edition, staff writers will break down each position for the 2022 Ohio State football team and offer behind-the-scenes looks at the Buckeyes’ preparation for the season opener against Notre Dame.

Tyler James is a Notre Dame beat reporter for InsideND Rivals. You can read his work here and follow him on Twitter at @TJamesND.