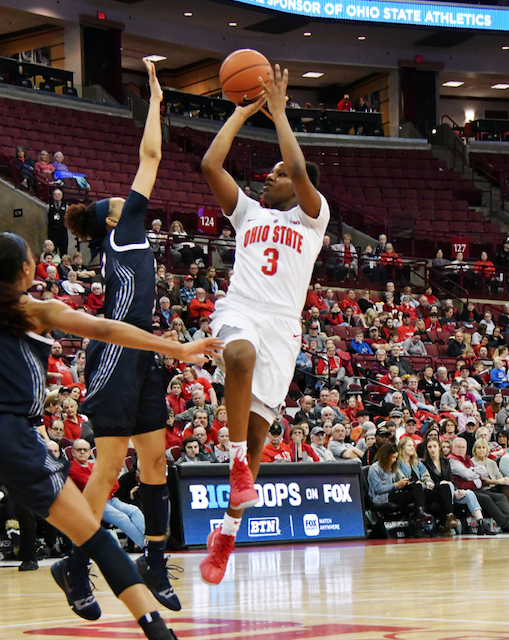 Head coach Kevin McGuff was concerned that the Ohio State women’s basketball team took a step back Sunday at Northwestern, where the Buckeyes snapped their two-game winning streak with a 17-point loss to the Wildcats, but they rebounded Wednesday against Penn State.

It took some late-game heroics, coming after blowing a 10-point lead, but OSU overcame a wire-to-wire Big Ten battle by pulling out a 78-73 win over the Nittany Lions at Value City Arena in Columbus.

“Really proud of our kids for hanging in there,” McGuff said. “They showed a lot of character down the stretch and especially our upperclassmen showed great leadership. We had really good execution, especially on the offensive end to get some big baskets.”

PSU (10-12, 3-8) pounced in front of a 5-4 edge 3:40 into the game before Ohio State overtook an 8-5 lead behind back-to-back jumpers from Santoro and freshman guard Janai Crooms (nine points) through the 4:29 mark. In the remaining 4:10, a 6-6 stalemate ensued but the Buckeyes commanded a 14-12 margin to end the first quarter, featuring a pair of layups from Waterman and a bucket by junior guard Jensen Caretti with 39 seconds left.

To open the second quarter, OSU jumped out for an 18-12 advantage at the 8:31 point after layups from Crooms and Juhasz. However, Penn State stormed back on a 7-0 spurt into the 7:13 mark to retake a 19-18 lead. A back-and-forth frame followed with Ohio State edging the Lions over the final 6:36, 11-10, tying the contest at 29-29 on Juhasz’s layup with one second left before halftime.

The Buckeyes began the third quarter with momentum when Grande and Santoro splashed consecutive triples, putting PSU down 35-29 at the 8:29 point. Penn State closed the gap to 37-35 before OSU answered again with a pair of triples, from Waterman and Crooms, to go up 45-39 into the 4:11 media timeout. Ohio State started to pull away with its 49-39 lead as the largest of the game, but the Lions lingered in the last 2:39 and capitalized on a 12-2 run that knotted the score at 51-51 into final 10 minutes.

“We don’t like that because we keep doing that,” Grande said of not putting teams away. “It’s been an emphasis lately. If we have a 10-point lead, let’s make it 20-point lead.”

Crooms intercepted a cross-court pass and OSU cashed in with Waterman’s make from the charity stripe to go up 56-53 at the 7:32 point. After PSU took a 66-63 lead and threatened to pull away with 3:30 to go, OSU answered behind Grande’s three-pointer at the 3:08 mark that tied it up.

Ohio State retook a 68-66 edge on Waterman’s free throws with 2:40 left before Penn State’s pair of makes from the charity stripe on the other end knotted the score back up, but Waterman made it to the line again at the 2:08 point and put the Buckeyes ahead 70-68. Those free throws set up some separation with 1:38 left when Grande’s layup — after Crooms’ steal — gave OSU a 72-68 edge, but the Lions refused to go away.

“Overall, in the fourth quarter, we knew we were going to win by our defense,” Waterman said. “For a while there, we were only up two and we kept going back and forth with them, letting them score every time we would score. We knew that wasn’t OK.”

After PSU stayed alive on Jaida Travascio-Green’s triple at the 1:20 mark, Siyeh Frazier’s jumper with 30 seconds left put Ohio State down 73-72. Out of the Buckeyes’ timeout, Grande fielded the inbounds pass backcourt and drove to the basket for the go-ahead layup with 21 seconds remaining for a 74-73 edge.

Penn State called timeout and held for the final possession, where Waterman blocked a layup attempt that went out of bounds with 18 seconds left and was initially ruled Lions’ ball before replay reversed the call on the floor. The Buckeyes inbounded the ball to Santoro, who was fouled with 14 seconds to go but calmly sank both free throws — and then another pair with four seconds left — to ice the 78-73 final.

“We knew that eventually it was going to come down to getting a couple stops in a row, regardless of if we’re scoring or not,” Waterman said. “I just kind of put that in my mind and I think our whole team did, and we ended up getting a lot of good team stops at the end.”

OSU looks to string together consecutive conference wins Sunday when it hosts Iowa (17-5, 8-3) at 4 p.m. on Big Ten Network.