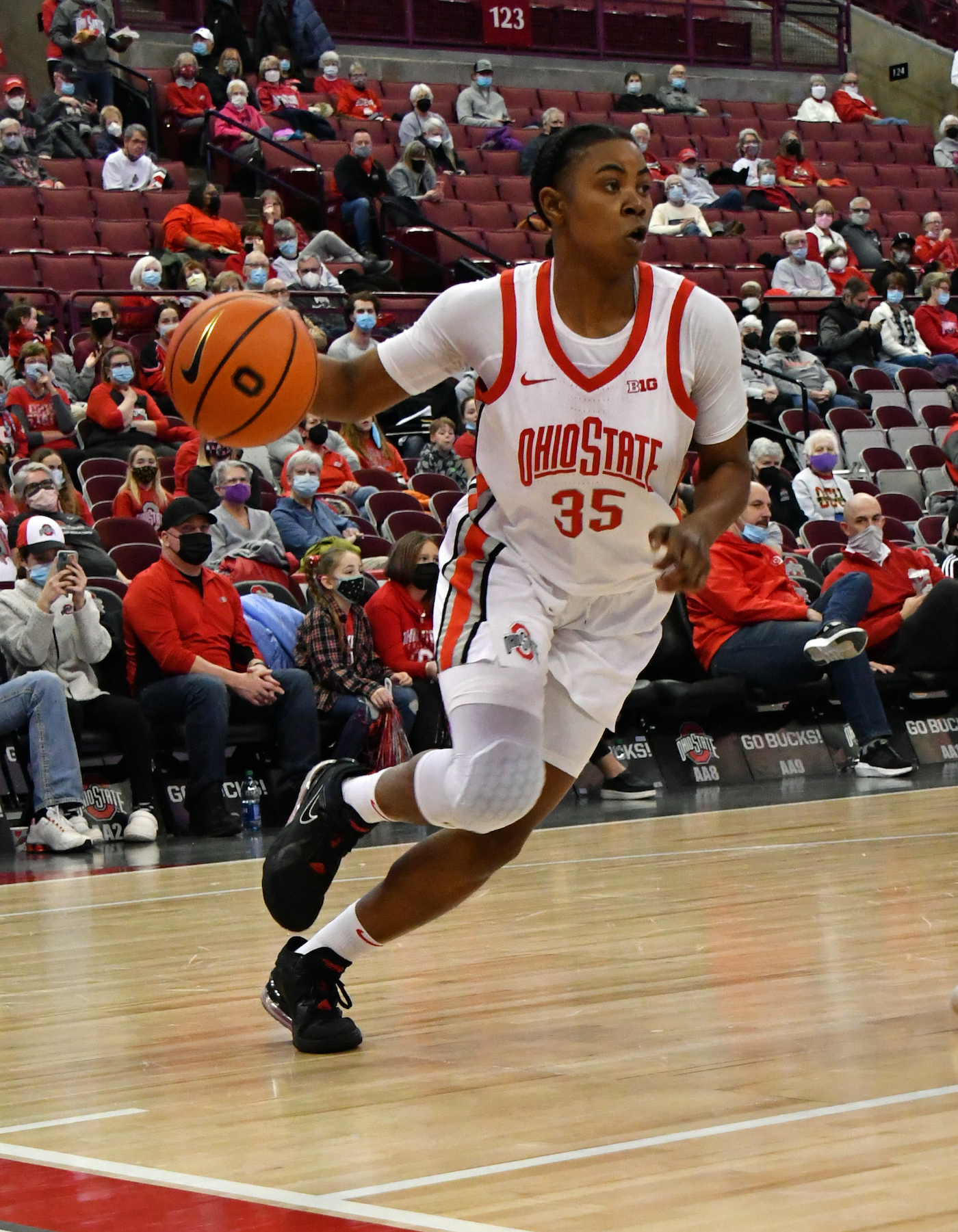 Perhaps feeling slow after a pair of big games against Michigan and the Hawkeyes, the Buckeyes got off to a lumbering start, finding themselves down 8-7 early and eventually down 35-27 at the half to a Rutgers team that is winless in the Big Ten this season.

Despite the early deficit, Ohio State responded with a 15-0 run to open the second half and take a 40-35 lead, then maintained the lead for most of the contest – as well as survived a potential game-tying shot from Rutgers guard Victoria Morris in the game’s final moments – in the team’s 61-57 win.

Ohio State found itself down early after beginning the contest 3 of 10 from the field. The Buckeyes – or senior guard Taylor Mikesell, rather – responded with an 8-0 run, with the Oregon transfer knocking down two triples and connecting on a layup to give Ohio State a 15-8 lead with 2:24 remaining.

Rutgers forward Osh Brown hit a layup on the Scarlet Knights’ final possession of the quarter, but Ohio State sophomore guard Rikki Harris answered with a jumper to make it 17-11 at the end of the frame.

The Scarlet Knights opened the second quarter on an 8-2 run to tie things up at 19, and after 3-pointers on four straight possessions, senior guard Braxtin Miller hit a layup to give Ohio State a 27-25 lead with 3:40 remaining, but it would be the last lead of the half for the Buckeyes.

Rutgers closed the second quarter out on a 10-0 run, taking advantage of two turnovers by Ohio State and 0-of-4 shooting by the Buckeyes to lead 35-27 at the end of the half.

Ohio State’s 13-0 run to open the second half lasted for 6:50. During this time, Rutgers turnover the ball over seven times and was 0 for 6 from the field; Ohio State, meanwhile, was just 2 of 7 from the field during this run but made four trips to the free-throw line resulting in eight points, eventually ending the quarter up 46-45.

The Scarlet Knights made a push in the fourth quarter, at one point taking a 51-50 lead, but Ohio State was led through the turmoil by Mikesell and junior forward Jacy Sheldon, who combined for a 7-0 run to make it 57-51 with 3:37 remaining.

From there, the teams combined for over two minutes of scoreless basketball, eventually broken after a triple from Rutgers guard Sayawni Lassiter to make it a one-point game, 57-56, forcing Ohio State head coach Kevin McGuff to call a timeout.

Out of the timeout, Rutgers began fouling Ohio State, and Mikesell and Sheldon were able to close things out at the free-throw line for the 61-57 win as Morris’ potential game-tying 3-pointer fell short with just seconds to go.

Mikesell led the Buckeyes with 26 points on 9-of-17 shooting (6 of 11 from three-point range) in one of their lowest scoring outputs of the season. Sheldon was not her usual scorer, finishing with just nine points, but she had a team-high five assists and eight rebounds.

The win was McGuff’s 100th win in Big Ten play since become Ohio State’s head coach in 2013. McGuff is the 14th coach in Big Ten history to achieve this feat, according to Big Ten Network.

Ohio State will take its home court on Thursday against Nebraska for a 7 p.m. tip. The game can be viewed on the Big Ten Network.