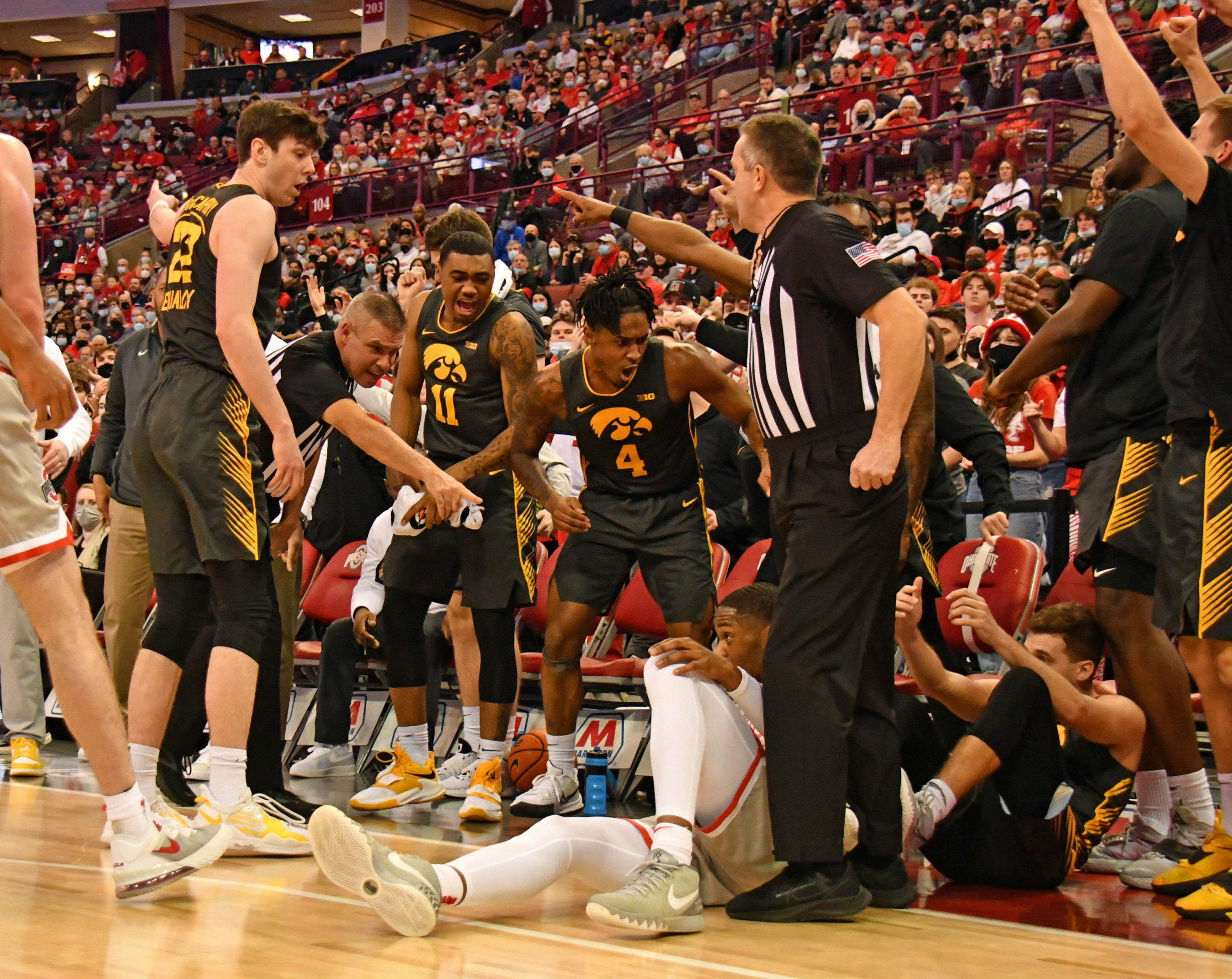 It’s not quite March in Columbus, but the weather outside of Ohio State’s Value City Arena and the fans inside of it on Feb. 19 as the Buckeyes played host to the Iowa Hawkeyes said differently. The crowd – not quite full but well above the season average – poured in as the sun chipped away at the snow that had covered the ground since the last time these two were slated to play this game, all the way back on Feb. 3, when it was Ohio’s inclement weather that kept Iowa’s plane grounded and forced a postponement.

That reception, working in tandem with the intensity on the floor, offered what often felt like the full March experience more than a week before the calendar flips and college basketball enters overdrive. And for Ohio State, at the end of an extremely physical 40-minute donnybrook, it offered what could have been a critical win to stay afloat in the Big Ten title race. But foul trouble, issues on the boards, and turnover woes were too much for the Buckeyes, previously unbeaten at home, to overcome as they fell 75-62 and dropped to 16-7 on the season and 9-5 in league play.

The Value City Arena crowd was not on its feet for the full 40 minutes, picking its spots in the first half before finding some emotional investment in the second half, but the Buckeyes, donning they Gray Jimmy Jackson-era throwbacks with the 1990-91 Big Ten championship squad in attendance (and recognized at the half), brought the energy from the tip-off. Ohio State stormed out to 21 points in the first seven minutes of the game, using a 14-3 run across just over three minutes to earn an 11-point edge.

The high-powered Hawkeye offense had plans of its own, though, rattling off 10 straight points across the next three minutes in response as the Buckeyes came up empty, drawing within one point at 21-20 before Zed Key broke the OSU dry spell with three points the old-fashioned way and some finger guns to celebrate. The back end of the half was defined less by runs and more by strong shooting on one end and tenacious rebounding on the other.

Neither team created more than four points of separation through the rest of the half and the Hawkeyes headed into the break with a slight lead, 39-38. Ohio State knocked down 15 of its 29 first-half shots to Iowa’s 15 of 36, but the Hawkeyes secured 14 offensive rebounds worth 11 second-chance points and benefitted from seven Buckeye turnovers to overcome OSU’s edge in marksmanship.

It seems the two sides liked that pace because they showed no interest in slowing down out of the break. Ohio State found points on four of its first five possessions out of the break and had the chance to make it five of the first six possessions when E.J. Liddell went to the stripe, but he missed both tries. That was all the space Iowa needed, erasing a 45-41 deficit in less than a minute with a Patrick McCaffery free throw and a Jordan Bohannon 3-pointer knotting the game at 45 into the first timeout of the half.

The teams might have agreed on an all-out barrage of offense, but they didn’t run that by the striped crew officiating the game. An electric start slowed to a crawl out of that 16-minute media timeout with six foul calls in less than four minutes, each one drawing the Buckeye crowd out of its first-half slumber more than the last, culminating with a whistle on Jamari Wheeler that all but brought the house down around. Only seconds away from forcing a shot clock violation with the game tied at 49, Wheeler was dinged for a foul on a Bohannon 3-point try. He knocked down a pair from the line.

If there was one single turning point in the game, it was that foul. Ohio State succumbed to more than four scoreless minutes – a lifetime in this kind of game – with as many attempted shots (two) as turnovers. Iowa expanded its lead to 58-49 in the interim before Key finally snapped the funk with 8:59 to play, converting a pair of free throws. Eugene Brown III did the same a possession later to cut the deficit back to five points and reanimate the crowd briefly, but Iowa’s offense proved too much to handle.

The Murray brothers, who had been largely quiet after Keegan rattled off 20 points in the first half, delivered a 10-2 run on their own to push the Hawkeyes back into control with a 68-55 lead at the 4:52 mark. Ohio State drew within as few as six points, 68-62, when Liddell knocked down a 3-pointer with 2:40, but Iowa secured its 19th and 20th offensive rebounds on the following possession, drained nearly a full minute off the clock and emptied the stands with a Connor McCaffery 3-pointer. The Buckeyes would not score again.