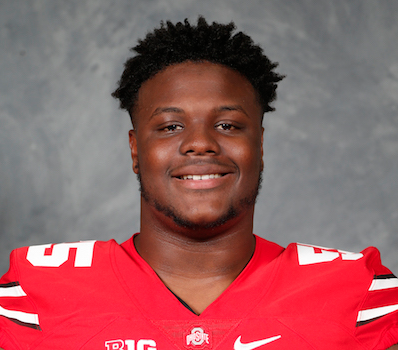 Ohio State’s depth on its defensive line suffered another hit Sunday when Malik Barrow took to Twitter and announced his medical retirement from football. Entering his third year with the program following a season-ending ACL injury as a redshirt freshman during the Buckeyes’ 54-21 win over UNLV on Sept. 23, 2017, Barrow’s career ends after three game appearances. The procedure marked his second ACL repair after he suffered the same injury in the opposite knee as a high school player.

Following the spring, he continued to recover from his latest ACL injury into the fall. Asked for an update on the Big Ten coaches teleconference Oct. 9, Urban Meyer said Barrow was still trying to reach full strength. The head coach added that the defensive tackle remained on the roster.

“He’s still rehabbing and working his tail off to get back,” Meyer said.

Barrow signed with OSU as a four-star defensive tackle from Bradenton (Fla.) IMG Academy in the 2016 recruiting class and enrolled early for spring camp. He was the 247Sports composite’s No. 299 overall prospect, No. 32 defensive tackle and No. 42 player in Florida two years ago. His first three years of high school came at Tampa Catholic.

“I love this game with all my heart,” Barrow’s tweet read. “It’s opened so many doors for me in my life and I’ve gotten to experience things that I’d never thought I’d be able to. But due to unfortunate circumstances throughout my football career, I found it was in my best interest to medically retire. Even though it has been rough the past couple of years I couldn’t be anymore thankful to be in the position I am in. I’ve grown in every aspect of my life. I have built so many great relationships with some real ones that will be my brothers the rest of my life. I’ve had a great experience playing at OSU getting a Chance to compete at the highest level everyday. Thank you to everyone who played a part in helping me achieve this. I will stay at OSU and make sure I graduate! I will be successful and I am determined to make it happen! I will continue to grow as a man and I am ready to take on this next chapter in my life!”