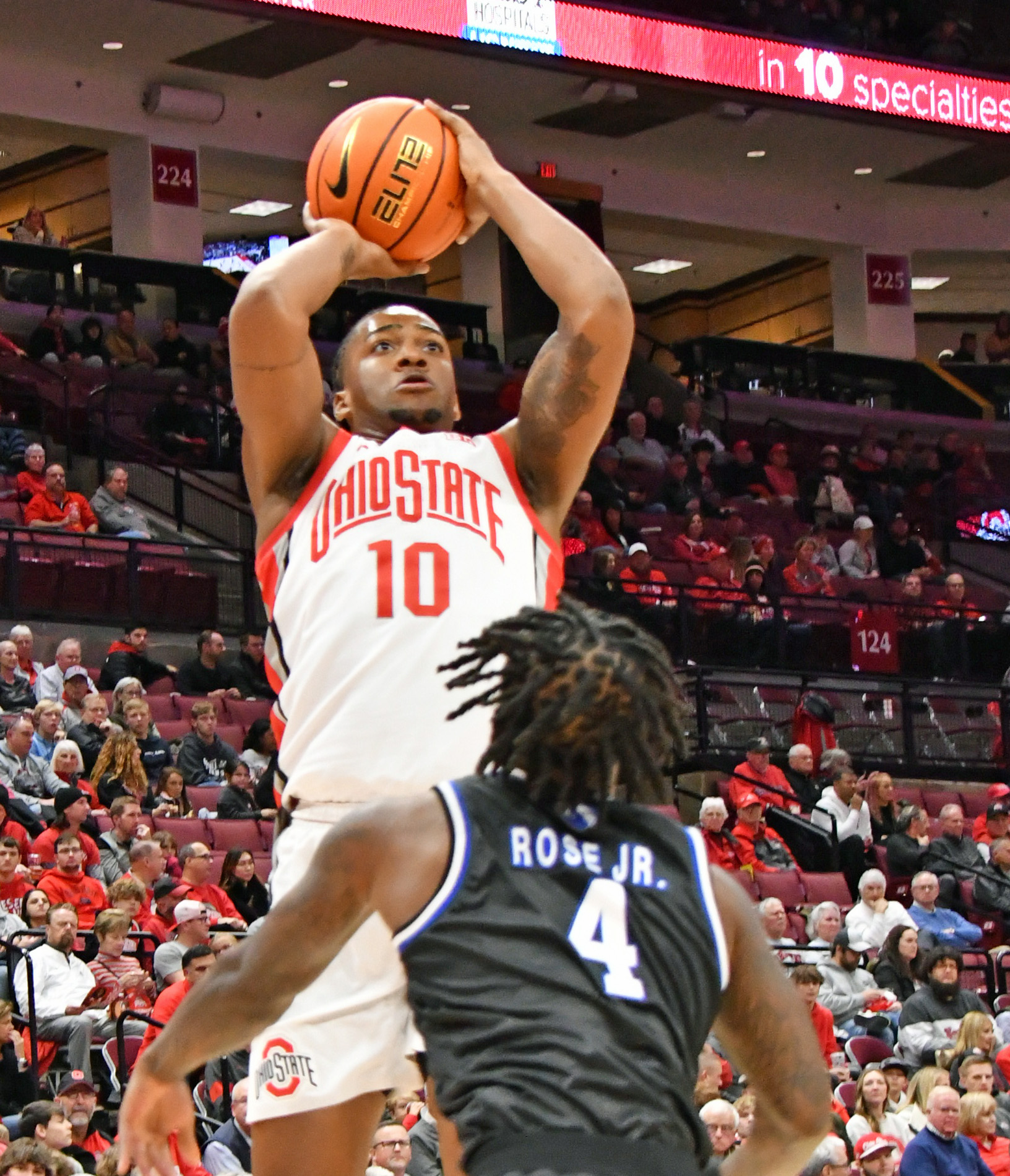 Ohio State’s night started in the same fashion as its previous two games, with a bucket from forward Zed Key. However, the Buckeyes soon found that offense was hard to come by during their 65-43 win over Eastern Illinois on Wednesday at Value City Arena.

The Buckeyes (3-0) and Panthers (0-4) slogged through the early stages of Wednesday’s contest, as both teams combined to shoot 1-for-13 during the game’s first five minutes. Ohio State gained some separation, however, utilizing a 17-3 run to pull ahead 21-5 with 9:15 remaining in the first half. But the Panthers came storming back with a 15-5 run of their own to close the frame and take a 26-20 deficit into the locker room.

“They came in here and played hard,” Ohio State guard Isaac Likekele said of the first half struggles. “Eastern Illinois is a talented team. For it to be a three-point game in the first half, that’s not a surprise because they are Division I athletes and they’re a very talented squad.

“It’s just teaching us how to be prepared for these moments later in the season,” he added. “We’ll just learn from this situation.”

Freshman forward Brice Sensabaugh kept the Ohio State offense afloat during an abysmal first half for the Buckeyes, in which they shot 31 percent from the field (9 for 29) while turning the ball over six times. Sensabaugh scored 13 of his game-high 20 points during the opening frame, led by a trio of first-half threes. Sensabaugh also provided the highlight of the night, using a pump fake from the corner to shake a Panther defender before driving along the baseline and throwing down an emphatic one-handed slam to lift Ohio State’s lead to 39-25 during the second half.

The Buckeyes survived the first half on the back of their defense, which held the Panthers to 8-of-32 shooting in the frame. Ohio State held up its defensive intensity into the second half, holding Eastern Illinois to just 23 points — while the Panthers shot 8 for 32, again — to run away with the win.

“Our defense was something that carried us,” Sensabaugh said. “We were able to force tough shots. Obviously, our offense didn’t play the way we wanted to, so keeping their offense down is something that’s going to be important for us and I think that’s something we did.”

The Panthers brought Ohio State’s second-half lead to as low as three, but the Buckeyes utilized a 7-0 run to push the lead back to double-digits with 15:51 to go in regulation. From there, Ohio State cruised to the victory — outscoring Eastern Illinois 30-18 during the game’s final 15 minutes.

Holtmann noted Ohio State’s second-half offensive surge was a result of the Buckeyes placing more of an emphasis on playing through the paint.

“It was obviously a big emphasis, I think just in general, playing with more pace, more cutting, more movement and playing through the paint. I thought we needed to do that,” head coach Chris Holtmann said. “We did not do a good job of that in the first half.”

Key registered his third double-double of the season by dropping 10 points, while leading Ohio State’s 52-37 advantage on the boards, with 14 rebounds. He tallied four offensive rebounds while helping the Buckeyes collect 13 second-chance points.

The Buckeyes saw their early-season turnover issues pop up yet again, as OSU finished the evening with 17 — which EIU turned into 13 points. Ohio State also saw deficiencies from the charity stripe, hitting just 61.1 percent of its free throw attempts in the win.

Ohio State senior guard Tanner Holden passed 1,500 career points on a layup with 10:34 remaining in the second half. The transfer guard scored the bulk of those points during his three years at Wright State.

Although Eastern Illinois shot just 25 percent from the field on the night, graduate guard Yaakema Rose Jr. produced a solid outing for the Panthers behind 17 points which came on 6-of-16 shooting.

“Obviously a lot to clean up,” Holtmann said. “A lot to get better on, a lot to improve on as we move forward.”

Following Wednesday’s win, Ohio State heads on the road for the first time this season, trekking to Hawaii for the Maui Invitational. The Buckeyes tip-off tournament play against No. 17 San Diego State on Monday at 9 p.m., which will be televised on ESPN2.