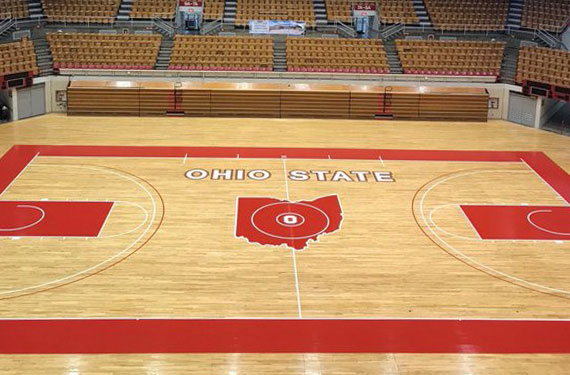 The Ohio State basketball team returned to its former stomping grounds, St. John Arena, for one game last season. And though the Buckeyes wore throwback uniforms to commemorate the event, one thing was missing: a matching court.

Ohio State — which has played most of its games at the multi-purpose Schottenstein Center since 1998 — simply moved its current court into St. John Arena for last season’s win over Cleveland State because the court at the historic venue had been repainted to include lines for the men’s and women’s volleyball programs.

That issue has been resolved, though, after the university opened the Covelli Center — which houses the Buckeyes’ non-revenue teams — earlier this year. And with no full-time tenant at St. John Arena, the Buckeyes have returned the court to its original design.

The court features its familiar scarlet baselines and lanes with “Ohio State” wordmark and a scarlet state outline with a white Block “O” center court.

The Buckeyes will return to St. John Arena again this season, hosting Kent State on Nov. 25. The Ohio High School Athletic Association also recently announce it is moving its girl’s and boy’s basketball tournaments to the arena in 2020 and 2021, respectively.