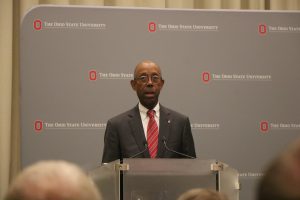 The decision came after a board of trustees meeting that surpassed 10 hours at the Longaberger Alumni House in Columbus. Along with the announcement of the suspensions, the university released a summary of the findings of the investigation.

Meyer has been on paid administrative leave since Aug. 1. The allegations, which were against wide receivers coach Zach Smith, stemmed from a 2015 incident that was investigated by the police. No charges were ever filed and Smith was not arrested at the time.

Smith was fired by Meyer on July 23.

The investigation concluded that Smith and Meyer, while they did not condone or cover up any domestic violence incidents, did not fully understand their reporting obligations regarding the incident.

The summary provided by the university at Wednesday’s press conference can be found below. The full report can be found here.

The President and the members of the Board of Trustees of the University have received the Report of the Independent Investigation and find it to be complete, professionally done and credible.  The President has consulted with the Board of Trustees and based upon these independent findings, the University accepts the findings of the report and, based on them, takes the following action:

Although neither Urban Meyer nor Gene Smith condoned or covered up the alleged domestic abuse by Zach Smith, they failed to take sufficient management action relating to Zach Smith’s misconduct and retained an Assistant Coach who was not performing as an appropriate role model for OSU student-athletes.  Permitting such misconduct to continue is not consistent with the values of the University and reflects poorly on Coach Meyer, Athletic Director Smith, and the University.  Their handling of this matter did not exhibit the kind of leadership and high standards that we expect of our Athletic Director, Head Coach, Assistant Coaches and all on the football staff.  Urban Meyer is suspended through September 2, 2018, and for the games on September 1, 8 and 15 without pay. Gene Smith is suspended without pay from August 31-September 16.