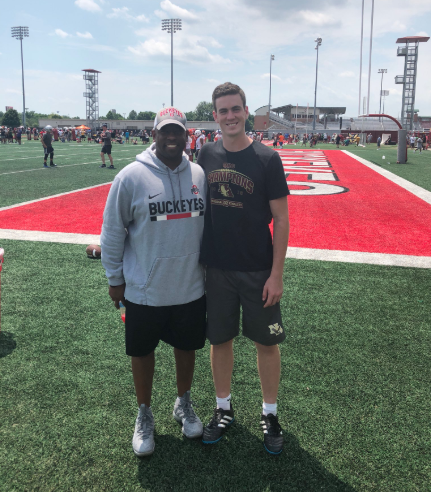 O’Shaughnessy emerged onto the coaching staff’s radar over the summer, spending June 16 in Columbus at Ohio State’s specialists camp.

O’Shaughnessy picked up an offer from Toledo on Nov. 14. Ohio State entered the equation the next day with a non-scholarship opportunity.

Prior to his camp performance with the Buckeyes, he went to Kentucky (Feb. 3), Princeton (April 2), John Carroll (June 3) and Purdue (June 10).

Chris Sailer Kicking ranks O’Shaughnessy as the No. 18 punter in the nation and No. 2 in Midwest behind another Ohio punter in Akron Copley’s Porter Wilson, who committed June 21 to Duke.

“Michael is a very talented high school punting prospect,” O’Shaughnessy’s evaluation reads. “He is big, tall, strong and athletic. Michael has an ideal D1 college punting frame. He shows he can hit great college level ball and his consistency is improving. He averages 40+ yards with 4.4+ hang time. There is tons of potential here. I look forward to seeing what the future holds. He should have a huge 2018 season turning the heads of college coaches. He is a fine young man that is always a great pleasure to work with. Michael is going to make a great addition to a college football program. Excellent prospect.”