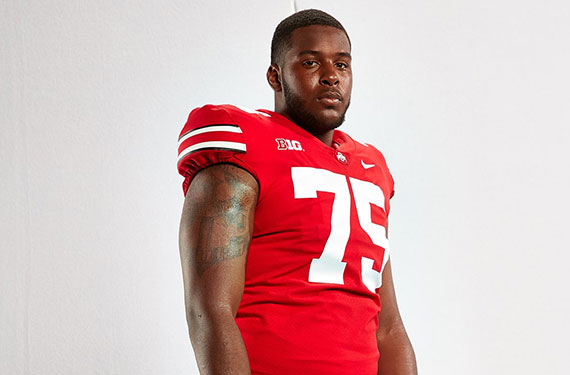 Ohio State junior left tackle Thayer Munford on Tuesday afternoon was named to the preseason watch list for the Outland Trophy, which honors college football’s best lineman on either side of the ball (but excludes defensive ends).

The 6-6, 310-pound Munford will be the lone returning starter on Buckeyes’ offensive line this fall. He started 13 games and was named honorable mention All-Big Ten as a sophomore last season, but a nagging hip injury kept him out of the Rose Bowl and spring practice.

The Outland Trophy is named after John H. Outland, one of the few players in college football history to be named an All-American and two different positions (offensive tackle and halfback). It has been awarded annually by the Football Writers Association of America since 1946, making it the third-oldest major award in the sport.

Eight semifinalists and three finalists will be named Nov. 20 and 25, respectively, while the winner will be announced during The Home Depot College Football Awards on Dec. 12 in Atlanta. The official presentation will be made at the National Foundation for Infectious Diseases Outland Trophy Awards Dinner sponsored by Werner Enterprises on Jan. 15, 2020, in Omaha, Neb.