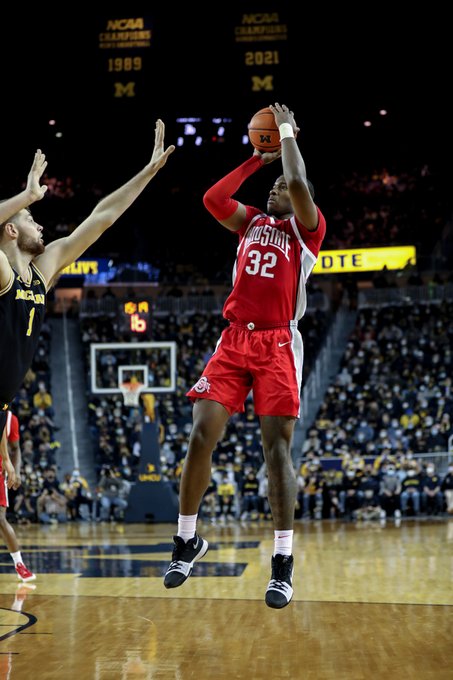 Ohio State and Michigan produced as entertaining and close a pair of matchups as anyone could possibly ask for a season ago. The two matched up just once in the regular season but drew each other again in the Big Ten tournament semifinals, splitting the series with one win apiece and only four points of difference in the aggregate. The Wolverines won the first matchup in a top-10 92-87 barnburner – one of the best games of the college basketball season – while Ohio State earned its revenge in Lucas Oil Stadium, 68-67.

Both games were defined by battles in the paint between Michigan center Hunter Dickinson and Ohio State’s E.J. Liddell, both All-American candidates who made their presences felt throughout those games. Dickinson scored 43 points and grabbed 17 rebounds across the two games, while Liddell notched 41 points and 15 boards. The two squared off for nearly the entirety of both games, and their mini rivalry was reactivated as the Buckeyes traveled to the Crisler Center to take on Michigan on Feb. 12 – even after an offseason that saw the two make friends as they went through the NBA pre-draft circuit.

Dickinson filled it up to the tune of 14 points with seven rebounds, but it was Liddell and the Buckeyes that got the better of the Wolverines (13-10, 7-6 in the Big Ten), claiming a much-needed road win 68-57 to improve to 15-6 (8-4 in the Big Ten) on the season behind 28 points and five rebounds from Liddell.

Though the stars down low were just as important in this matchup as they were in those games last season, this most recent iteration offered nowhere near the firepower that the two mustered in Columbus a season ago. Ohio State shot 50.0 from the field but suffered eight turnovers and hit only four 3-pointers, while Michigan managed to shoot only 41.4 percent.

Within the flow of the game, neither team could find a basket until an Eli Brooks layup just after more than two minutes of misses. They combined for just 23 points in the first 10 minutes of the game, though 26 in the final six minutes helped generate a more respectable 33-30 halftime score in favor of the Buckeyes, thanks largely to 11 points from Liddell and seven from shooting guard Cedric Russell.

The switch to the second half did no favors for either group, although Michigan absorbed a bit more offensive damage than Ohio State. The Wolverines separated each of their first five scoring possessions in the second frame by at least 1:30 of game time and went scoreless from the 11:40 mark until a DeVante Jones layup with 7:41 on the clock, but the Buckeyes struggled to take advantage.

As the Wolverine offense stagnated with only 11 points in the first 13 minutes of the half, Ohio State generated only 15 in that same span, expanding its lead to 48-42 into a media timeout with 7:17 left but no further, squandering what had only shortly before been a 46-36 margin.

The difference would hold right around that margin for the next three minutes before a Liddell 3-pointer gave Ohio State a 55-47 lead, but Dickinson answered with a quick layup to cut the lead back down to two scores. Russell knocked down a jumper to push the Buckeyes back up to eight-point leaders into another timeout with 3:32 to play, but Michigan again refused to let OSU separate.

Brooks hit a 3-pointer of his own out of the break to bring the Wolverines again within five, but unlike on its last road trip when the Buckeyes froze down the stretch and failed to extend a late league, Ohio State found its knockout punch in Ann Arbor. Kyle Young hit a pair of free throws to extend the lead back to seven points, Malaki Branham delivered a high-arching jumper and pushed it to nine and Michigan came up empty on a trio of trey tries as the clock drained under one minute remaining, effectively ending the game when Eugene Brown III snagged a defensive rebound and forced U-M into fouling.

The Buckeyes missed their first two free throw tries with Brown at the line for one-and-one and Young on the stripe a possession later in the double bonus but cashed in on their next seven to coast to victory in the face of two Brooks free throws and a Caleb Houstan 3-pointer.

Beyond Liddell, it was Russell that the Buckeyes turned to for points, as he chipped in 12 with a pair of 3-pointers.