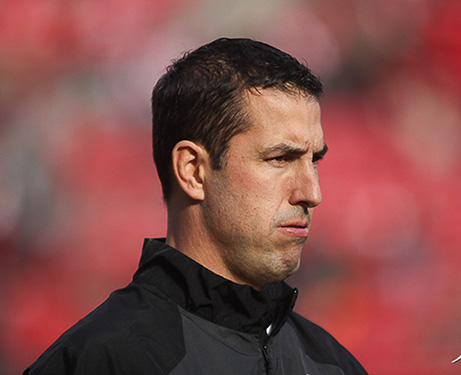 Ohio State historian Jack Park has had experiences with a handful of the Buckeyes former head football coaches, and that includes Luke Fickell.

Fickell’s time as Ohio State head coach was brief, but it came at a very difficult time, with the longtime defensive coach taking the position in May after Jim Tressel resigned.

While Fickell ended up with a 6-7 record, Park said he was still plenty impressed with how he did in his lone season at the helm. Park discussed that and more in Buckeye Sports Bulletin’s annual Interview Issue. Here is an excerpt:

“I think Fickell did a great job. Now, I’m a little prejudiced here because I’m a good friend of Luke’s. But Jim had to move out. I’m not sure what all happened there, I’m not sure they really had to move him out, but he retired or resigned on Memorial Day 2011. And so now Luke Fickell is moved into the head coaching position and it’s only two months until the team reports for fall practice. Luke went through the entire spring practice of 2011 as the defensive coordinator, not knowing he was going to become the head coach.

“And so what he did over those two months to get ready to become a head coach and coach that team, I think was a tremendous accomplishment. I realize the team ended 6-7, had a great homecoming win over Wisconsin and lost a couple games we probably shouldn’t have lost. The game out in Nebraska, we were way ahead and they came back at the end. We lost the Michigan game 40-34. But he did a great job under tremendously, tremendously strained circumstances there.

“I don’t know if he were the made any changes in the coaching staff, But he couldn’t, he had to keep the coach staff there. A lot of people were like tools had replaced, but he did his first job ever as a head coach and being thrust into that, under those circumstances, as opposed to going out and interviewing for a job and then getting the job. It’s quite different. I think he deserved tremendous amount of credit.”