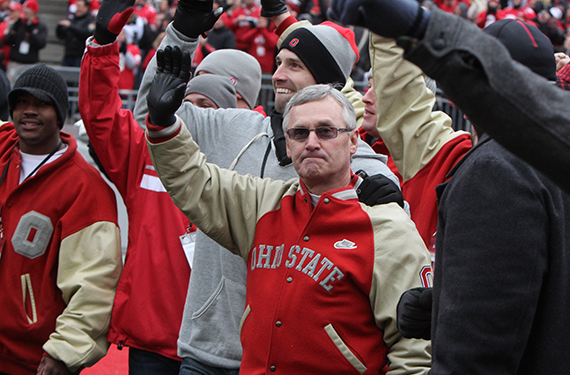 Ohio State historian Jack Park has had experiences with a handful of the Buckeyes former head football coaches, and that includes Jim Tressel.

Tressel took over as head coach in 2001 and led Ohio State to a national championship in his second year at the helm. He led the Buckeyes to two more championship appearances before his resignation in 2011 amid the “Tattoogate” scandal.

“One of my favorite games of all time is the 2001 Michigan game. When he was introduced as the new Ohio State coach my late wife and I, we don’t go to many basketball games, but 97.1 The Fan had given us two tickets to go to the Ohio State-Michigan game I think it was January 18, 2001. That was the day he was introduced as the head coach, and I went to the press conference. I was in the first row, and it was one of the most inspiring speeches I’ve ever heard. This guy’s coming in, he’s a Division I-AA coach at that time, a lot of people thought Glen Mason would get the job, because he’s from a bigger school (Minnesota), and one of the biggest one of the best decisions (former Ohio State athletic director) Andy Geiger ever made was hiring Tressel. And he comes in, he gives this speech, I’m telling you it brought tears to our eyes. And he hadn’t even coached a day yet.

“Now this is a 4 o’clock in the afternoon. So, I go home, I pick up my wife, we were going to go to dinner and then go to the basketball game. At halftime he’s introduced, where he said ‘You will be proud of our young people in the community, in the classroom and most especially in 310 days in Ann Arbor, Michigan.’ Here’s what that tells me. He knew what was expected of him. You have to beat Michigan. He had figured out over that 24 hours, how many days it was from the time he was introduced until we’re going to play Michigan up in Ann Arbor.

“Now, Michigan was a big favorite in that game. And Sue and I went up to the game. I remember driving up there that Friday afternoon late and we have WJR Radio on, which at that time was the voice of Michigan football, and they were just mocking Tressel, badly. They played those clips about how you’ll be proud of our young people in the community in the classroom and most importantly in 310 days in Ann Arbor. He never said we’re going to win. He said you would be proud, but they turned that around and they said, ‘You know Jim Tressel is predicting the victory way back on the day he was hired as head coach, and he’s going to find out differently tomorrow.’ Well, at the end of that first half, it was 23-0 Ohio State.

“We ended up winning the game 26-20. Now, Michigan, with all due respect to Ohio State and everything, I think Michigan probably overlooked Ohio State a little bit, and they just basically took it for granted. It’s one of my favorite games of all time. And then of course, Tressel coming back to win the national title in 2002 when we won most of those games coming from behind at the end to win. It’s almost like a fairy tale season, and it really was just a result of great, great leadership by Tressel.”