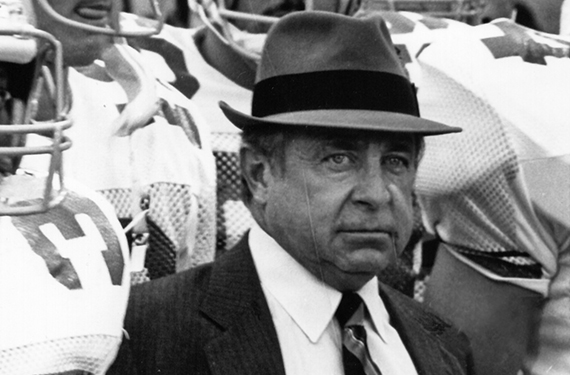 Ohio State historian Jack Park has had experiences with a handful of the Buckeyes former head football coaches, and the first he had a strong relationship with was Earle Bruce.

Bruce took over in 1979 after the firing of Woody Hayes, and he immediately impressed, winning his first 11 games before Ohio State fell in the Rose Bowl to USC. By the time he was fired in 1987, he held an 81-26-1 record.

Park discussed Bruce’s tenure at Ohio State, as well as his relationship with Hayes, in Buckeye Sports Bulletin’s annual Interview Issue. Here is an excerpt:

“Earle and I were very good friends. We spoke a lot together, particularly after he was no longer coaching. He had the unenviable position to replace Hayes. I mean, 28 years, who wants to replace Hayes?  But Earle came in and took charge tremendously. He came with him one point of a national championship in his first year. He was probably under the radar as a big-time college coach at the time he came into Ohio State. He’d been at Iowa State for six years and came in here and did a tremendous job. Never had a losing record of course, and Woody supported him tremendously.

“One of the things I remember, I think for the first two years of Earle’s position as head coach here, Hayes would not go to the games. He watched them on television at his home. The reason he did that was he did not want to take any attention away from Earle. He knew if he went to the press box, the press would be there to interview him and get pictures of him and put him on television and ‘What do you think coach?’ and all that. He didn’t want to do that. He never went to an Ohio State game until it was Earle’s third year.

“Hayes supported him tremendously and he spoke to at least one of Earle’s senior tackles toward the end of Earle’s career and everything like that. Woody died on March 12 of 1987, the year that Earle was eventually let go with a 6-4-1 record, and I’ve always believed if Woody Hayes was still alive at the end of that season, Ohio State would not have let Earle Bruce go.

“There were different political factors in there, I don’t know what they were, but Woody always supported Earle so strongly and Earle would bring Woody to the practices to talk to the teams. And when he died, the spring before Earle’s final season, that took an element out of Earle’s coaching, and that wasn’t that good of a team anyway. But that’s my opinion, I don’t think they would have ever fired Earle if Woody had still been alive.”