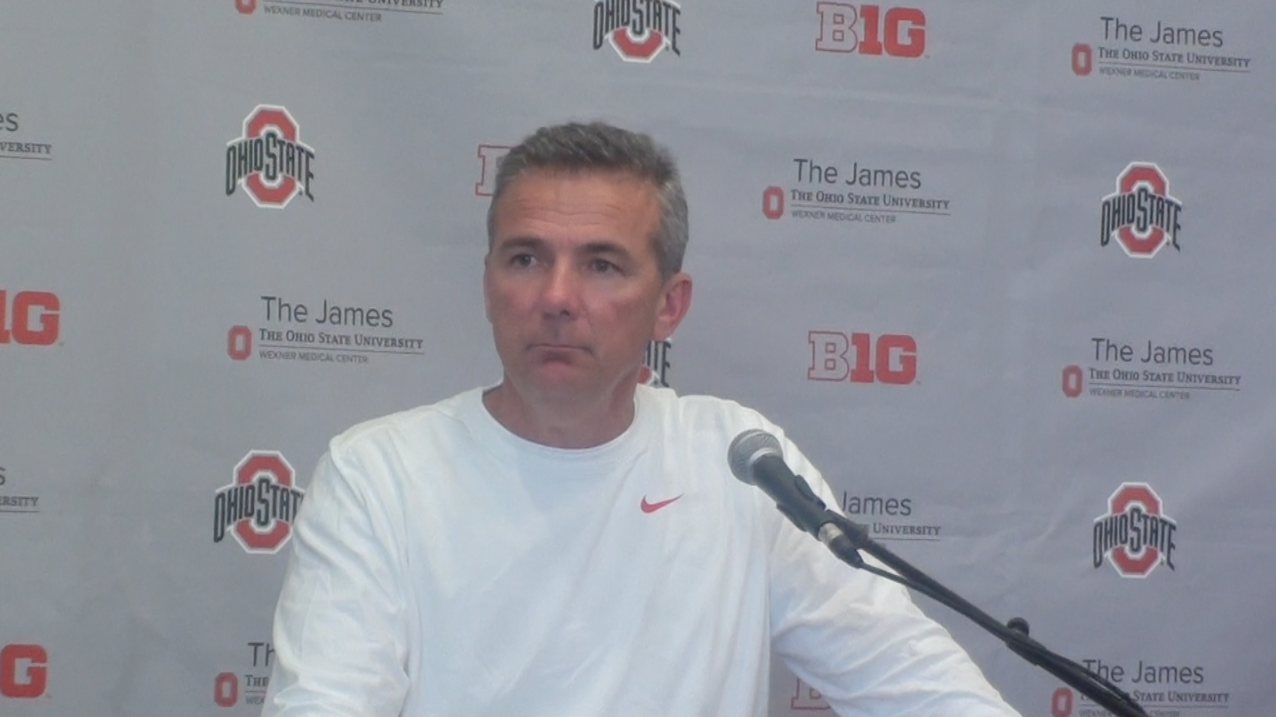 Ohio State overcame another sluggish start Saturday and pulled away for its 30-14 win over Minnesota, but how did Urban Meyer react to the mixed performance?

The head coach breaks down what he saw from his team in week seven, recapping the Big Ten victory for the Buckeyes (7-0, 4-0) against the Golden Gophers (3-3, 0-3).

URBAN MEYER: A couple comments. As always, thank the Buckeye nation. I know it’s fall break, and our students were there and thank them. Much appreciation for their support. A lot of credit to Minnesota, came in and they swung very hard..

Q. Urban, along the lines of those strengths and weaknesses, when you walk out of here today, are you satisfied with this win just because you’re 7-0, or you have some worries about what you saw today?
URBAN MEYER: I learned a long, long time ago — I guess not that long ago — enjoy every win, and like I said, come back tomorrow and get to work. Their concerns are certainly ours.

Q. The defense only gave up 14 points, none in the second half. But a lot of yards, a lot of slants that went against you. Could you assess the play of the defense and the state of it right now.
URBAN MEYER: Yeah, I was disappointed in the run. That player, their back had 160 yards rushing against us, and that’s not acceptable. And like you said, he was only 13 of 23, but I see the same thing, those slants, and we are — we’re a team that challenges every throw, and when you get beat, that’s a problem. So that’s something that’s not a strength right now.

The strength is that they came out and shut them out in the second half, a lot like the game last week where we held a team to 92 yards in the second half. And the best thing is we created some turnovers, and that was the difference in the game.

Q. To follow up on that, Coach, in ’12 you went over to the defense and made some drastic — a drastic move. Not suggesting you had to change the middle linebacker. But do you see yourself poking your head in the defensive room or being more — or do you do that every week?
URBAN MEYER: I do that every week, not just when it’s negative, but positive, because I want to know what’s going on. I have great confidence still. We lost really four starters for most — I think five starters are out right now. You lost Damon Arnette, BB Landers really did not play, and then you have Malik Harrison and Jonathon Cooper. So everybody’s dealing with it, but it’s a fact, and we have to play better.

Q. Urban, do you have an update on Thayer Munford yet?
URBAN MEYER: Yeah, he rolled his ankle a little bit, and he’s got a little hip issue, but I think he’s going to be okay.

Q. Over the last few years, it seems like your offensive line has built momentum throughout the course of the season and finished strong. Just where do you think this group is now? I know today was tough, but are you seeing any consistency there, or is there improvement to be made?
URBAN MEYER: I don’t think we played particularly well today. We’ll know more when we get a film grade, and I’ll let you know on Monday how they played. We gave up three sacks. We have to keep Dwayne upright. Short yardage is not a strength. Red zone is not a strength, and running the ball is not a strength. That’s something we’ve got to get figured out.

Q. K.J. Hill’s day in a nutshell, the one-handed catch down the seam for a touchdown and the one at the end that pretty much put it away. What have you seen from him lately as far as just rising to the occasion?
URBAN MEYER: Not lately. He’s been kind of our guy, as they all are. That group is as good of a group as I’ve been around. Good people, good unselfish guys that block hard and make plays for the quarterback.

Q. Urban, you guys obviously have a different type of offense this year than you’ve had in the past. But 92 yards rushing, you’ve mentioned a few times that you think the rushing isn’t the strength right now. How odd is that for you, just in general, considering how much success you’ve had your entire career rushing the ball on offense?
URBAN MEYER: Somebody told me at one time we’ve rushed for more yards than any school in the country for the last six, seven years. It’s discouraging a little bit, but once again, 7-0, and looking down we’re throwing for 412. It is what it is. I just know the game of football, I’ve been around. At some point, you’ve got to line up and do what you do.

Q. Can this team get where you want to go —
URBAN MEYER: I think so.

Q. Throwing for 400 yards and rushing for 90?
URBAN MEYER: As of today and last week, no, but there certainly are signs. We’ve got two good backs, and we’ve just got it get it worked out.

Q. Urban, when you’re in a passing team, and that’s what you’ve been the last few weeks, is there a danger the offensive linemen are going to pass protect and lose a little of that blocking edge? Have you seen that in your career? Can that happen?
URBAN MEYER: I’ve seen and heard about it. Obviously, we haven’t really witnessed it, and I’ve got to make sure that doesn’t happen. We have to continue to have that edge that Ohio State’s had for years and years and years and we’ve always had.