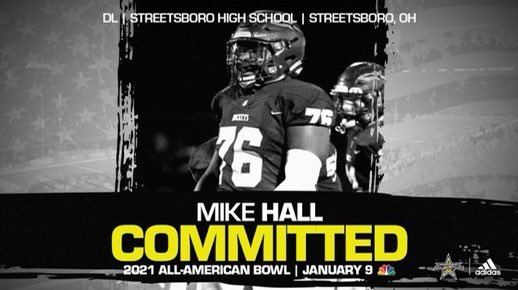 First off just wanted to say thank you to @demetricdwarren for the opportunity to become a UA All American. I felt it was the best decision to decommit from the UA All American Game. With that being said I will be committing to the Adidas All American Bowl💕 @aabonnbc @recruit247 pic.twitter.com/RnyupyJRZc

The Buckeyes are typically well-represented at the All-American Bowl, and there’s a possibility they reach double digits again this year with several of their top remaining targets, including Sammamish (Wash.) Eastside Catholic five-star defensive tackle J.T. Tuimoloau and Steilacoom, Wash., five-star wide receiver Emeka Egbuka, previously announcing their intentions to play in the game, as well.

The 2021 All-American Bowl is scheduled to take place at the Alamodome in San Antonio, Texas, on Jan. 9. It will be broadcast live on NBC at 1 p.m. ET.