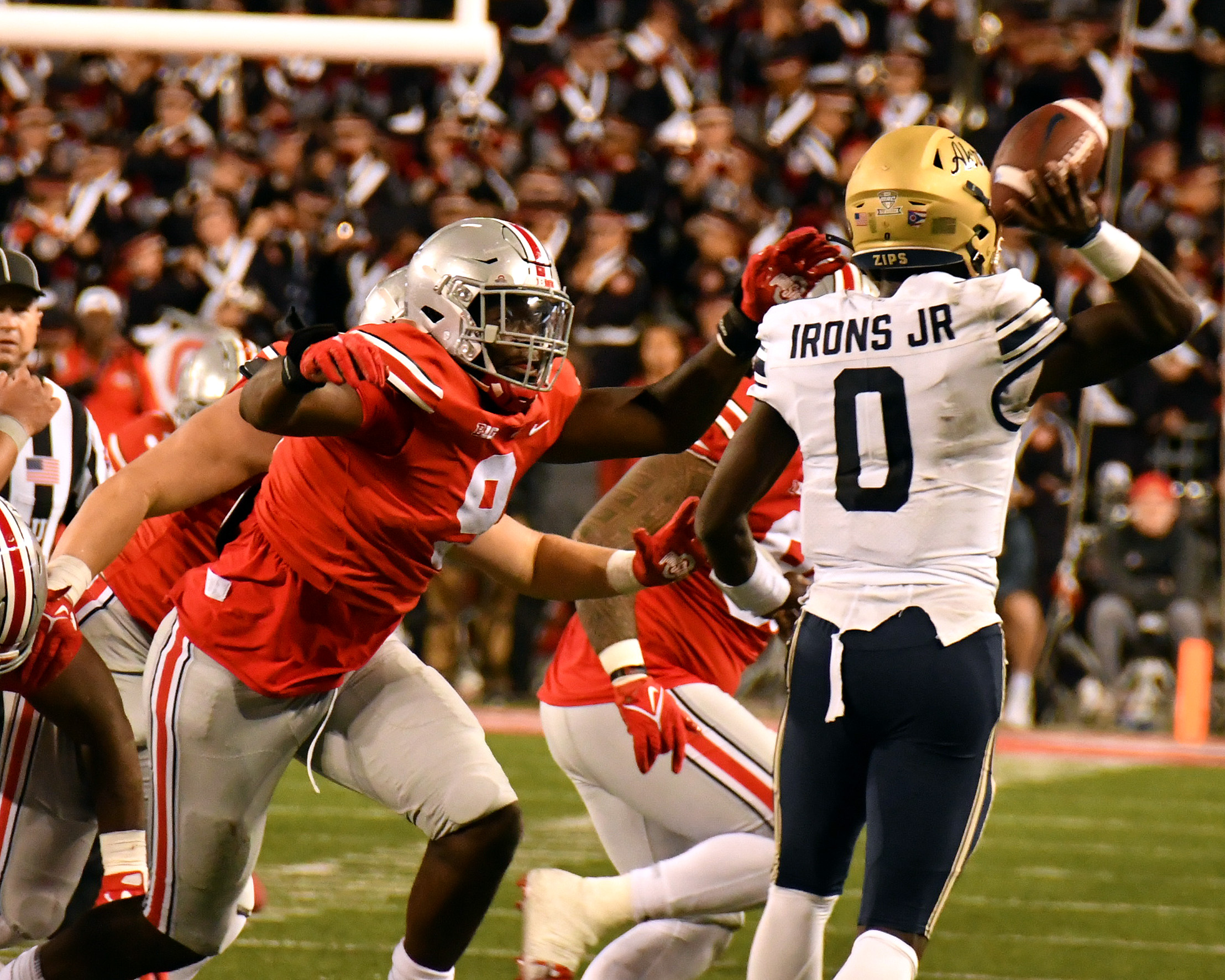 Ohio State’s two starting defensive ends could be upperclassmen, underclassmen or both.

The mix (and the most likely outcome)? Tuimoloau, Vincent, Cage and Harrison

First-year defensive coordinator Jim Knowles didn’t answer all of our questions this spring. He claimed his scheme remained “vanilla” through the first weeks of practice and used that time for talent evaluations and building solid relationships with his players. He will install more formations and plays with time, and there might be growing pains for this unit. Still, his momentum should carry through the summer and provide the Buckeyes with a much-needed boost on defense before the 2023 season starts.

Harrison’s Ohio State career still has a “the best is yet to come” feel. His first three seasons haven’t been what fans expected from a former five-star and top-five overall recruit. Harrison has recorded 72 tackles, 17 1/2 tackles for loss and 9 1/2 sacks in 33 games. Those statistics are not replacement-level, but they aren’t the same production of former Buckeyes Joey Bosa, Nick Bosa or Chase Young — the players Harrison drew comparisons to during his recruiting cycle.

The Lewis Center, Ohio, native will continue drawing attention from opposing defenses despite lacking production. His 4.47-second 40-yard dash and superior strength provide him with game-wrecking potential, but he’s yet to maximize it while wearing an Ohio State uniform. If Harrison can find lightning in a bottle as a senior, there’s no telling what he can do for the Buckeyes in 2023.

Vincent’s Ohio State career had been full of injuries before 2021. In his first three years with the program, the Baltimore native had only played in 15 games. However, his fortunes changed when he appeared in 12 games for the Buckeyes last season and collected career highs in every statistical category.

As a former five-star recruit and No. 1 defensive tackle prospect, Vincent proved he could play in high school. He’s yet to prove his skill can translate consistently at the collegiate level. Should Vincent stay healthy this offseason, he would likely retain his spot as one of the Buckeyes’ starting defensive tackles.

A 57-yard scoop and score touchdown against Penn State defined Cage’s 2021 season. After a forced fumble, the defensive tackle found a football at his feet and rumbled more than half the field for a six-point score. Other than the defining play, Cage didn’t provide eye-popping statistics for the Buckeyes. Still, the coaching staff loves the sixth-year senior’s ability to plug the middle of the defensive line and create problems for opposing offensive lines.

Like Vincent, Cage will need to fend off Williams and Hall from taking snaps, but they have a significant leg up with their experience in the Ohio State defense. However, with a new defensive coordinator, all bets are off. Knowles has made it clear that he will play the best four defensive linemen available regardless of age or tenure.

Tuimoloau committed to Ohio State on July 4, 2021, to become the final member of the 2021 recruiting class. When the inked dried, Tuimoloau was the highest-rated defensive prospect to sign with the Buckeyes in the modern recruiting era. The former five-star and No. 1 overall recruit was a next-level talent at Eastside Catholic High School and will look to repeat that football success in Columbus.

This spring, the Edgewood, Wash., native impressed the coaching staff with his improved strength and conditioning. Tuimoloau admitted that he struggled to find his footing as a freshman, but he’s looking to turn things around in his second season.

Tuimoloau will significantly impact the Buckeyes in several ways. He provides a pass-rushing threat and can be a run stopper off the edge. Make sure to familiarize yourself with Tuimolaou (Too-ee-moe-low-ow) this offseason because you’ll hear his name a lot on broadcasts in 2022.

Sawyer was the first verbal commitment in the 2021 class after making his pledge to the Buckeyes in February 2019. He signed with Ohio State 10 months later as the No. 3 defensive end and No. 4 overall recruit in his class.

When Sawyer arrived in Columbus, he and Marvin Harrison Jr. were the first Buckeyes to remove their black stripes. The coaching staff loved Sawyer’s grit and toughness — his ability to keep opposing offensive linemen guessing and wondering what moves he’ll use to beat them. Sawyer and Tuimoloau will create a menacing duo in the next two seasons. Buckeye fans should see a lot of that combination this season as Knowles works to find the best pairings for defensive production.

With Sawyer and Tuimoloau developing their strength and conditioning and earning valuable experience against talented offensive linemen in practice, the rising sophomores will be ready for Ohio State’s season-opening game against Notre Dame on Sept. 3.

The Spring Valley, N.Y. native will battle Harrison, Tuimoloau and Sawyer for reps at defensive end in 2022. With Sawyer looking like a frontrunner for Knowles “Jack” position, a hybrid between a down lineman and linebacker, the other three — Harrison, Tuimoloau and Jean-Baptiste — will operate as more traditional edge rushers.

Jean-Baptiste had his best season in an Ohio State uniform last year, and he will look to build that momentum regardless of his status as a starter.

Williams was dominant in small sample sizes last season. In 12 games, the then-true freshman made 16 tackles and recorded 6 1/2 tackles for loss with five sacks. His lack of playing time but pace-setting production left BSB writers and subscribers asking, “Where is Tyleik Williams?” when the Buckeyes needed a stop on defense.

This spring, the Manassas, Va., native answered that question. He told gathered reporters that he gained significant weight during the pandemic and played 40 pounds overweight. In the offseason, Williams said he dropped that weight thanks to diet and work on exercise bikes, indicating Buckeye fans might see more of him this fall at defensive tackle.

Mitchell Melton will not play this season because of a torn ACL he suffered during the second quarter of the program’s spring game.