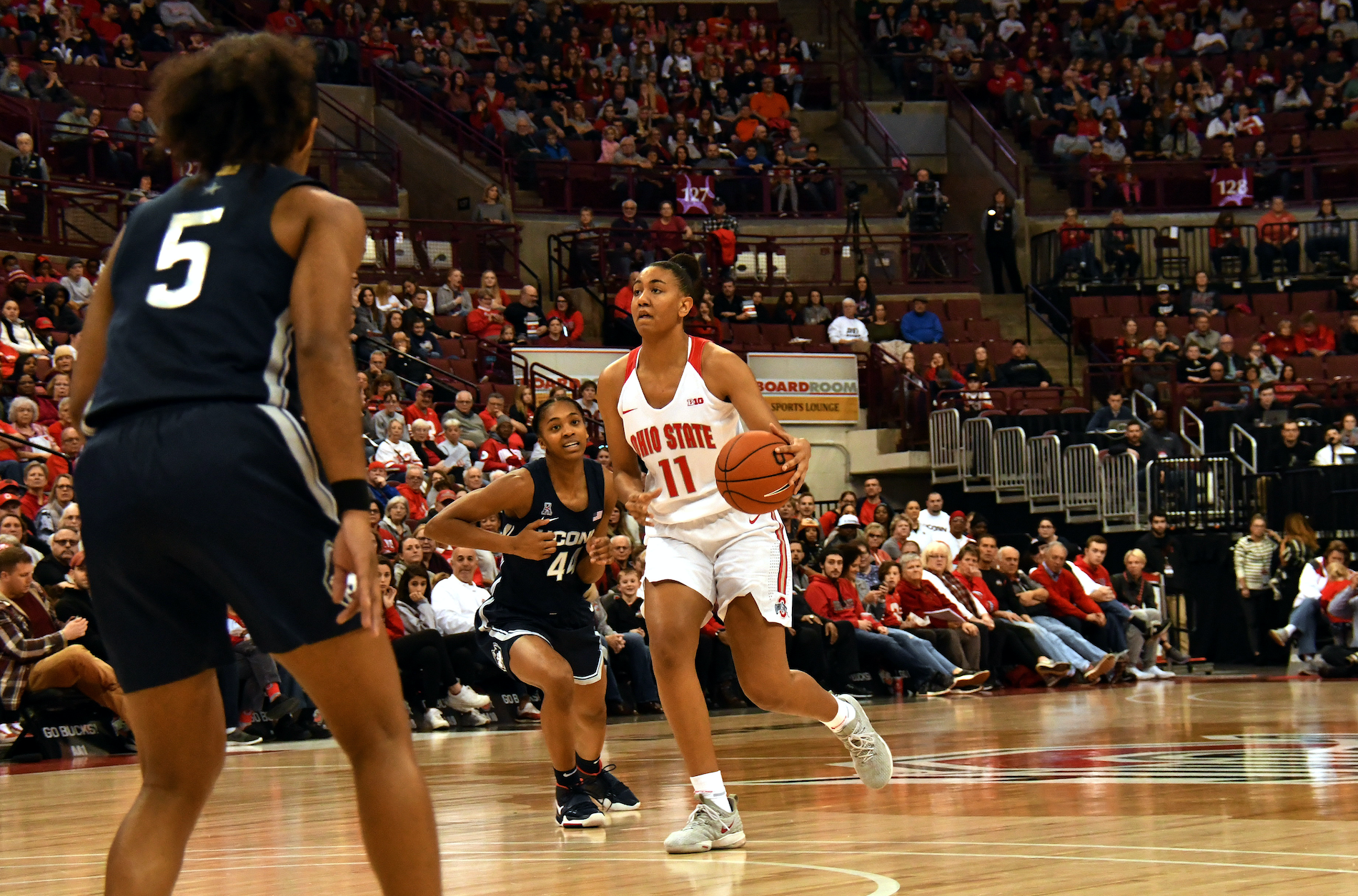 In a game that was expected to be the team’s second loss of the season, Ohio State put up more than a fight against the No. 4 UConn Huskies.

After an 85-53 defeat to UConn a season ago, Ohio State trailed by only two at half. From there, the Buckeyes continued to fight, but could not come up with the victory, falling to the Huskies 73-62.

“Obviously they’re a different team, so are we, I think the talent levels probably higher now than it was last year,” UConn head coach Geno Auriemma said. “They’re much more difficult to play against this year than they were last year, for sure.”

Bell said that a specific UConn player in forward Olivia Nelson-Ododa made the gameplan shift for the Buckeyes in order to take more chances from Outside.

“That’s something we were focusing on was getting open shots because we knew that we didn’t want Nelson to block shots because she’s know for shot blocking,” she said. “We were trying to get open shots and just knock them down.”

After the five Ohio State points, a pair of baskets by UConn senior guard Crystal Dangerfield — who led all scorers with 23 points — made the difference and allowed the Huskies to survive the upset.

“We’re really proud of how hard we played and just left everything on the floor,” junior guard Braxtin Miller said. “Even when maybe shots weren’t falling and things weren’t going our way, we never hung our heads, so that’s something really great.”

Bell scored eight of Ohio State’s first 22 points and finished with a team-high 16 points on 3-of-8 shooting from 3 on the day.

Sophomore forward Aaliyah Patty also gave Ohio State a boost with three threes of her own for 11 points in the game.

Free-throw shooting continued to be an area of concern, with the Buckeyes hitting only five of their 13 attempts.

UConn held a 33-31 lead going into halftime behind a team-high 11 points from sophomore guard Christyn Williams. The Huskies outrebounded Ohio State 26-19 in the opening half and shot 40 percent from the field.

“I was happy with how we competed,” Ohio State head coach Kevin McGuff said. “I mean I think that’s half the battle, they’ve got such a storied program and people can be back on their heels from the tip, but I thought we started the game with great energy, great intensity and we gave ourselves a chance today.”

The Buckeyes only shot 35.3 percent from the floor, while UConn shot 47.5 percent, including hitting seven of its 10 attempts from the field in the fourth quarter.

“I think we locked in on what they did best really well, and defended really well according to that,” Miller said. “They had some good shots at the buzzer at the end, and we can only give them credit for that, but defensively I think we did a lot of great things.”

Ohio State moves on to face South Dakota on Friday in Las Vegas as part of the Thanksgiving Shootout.