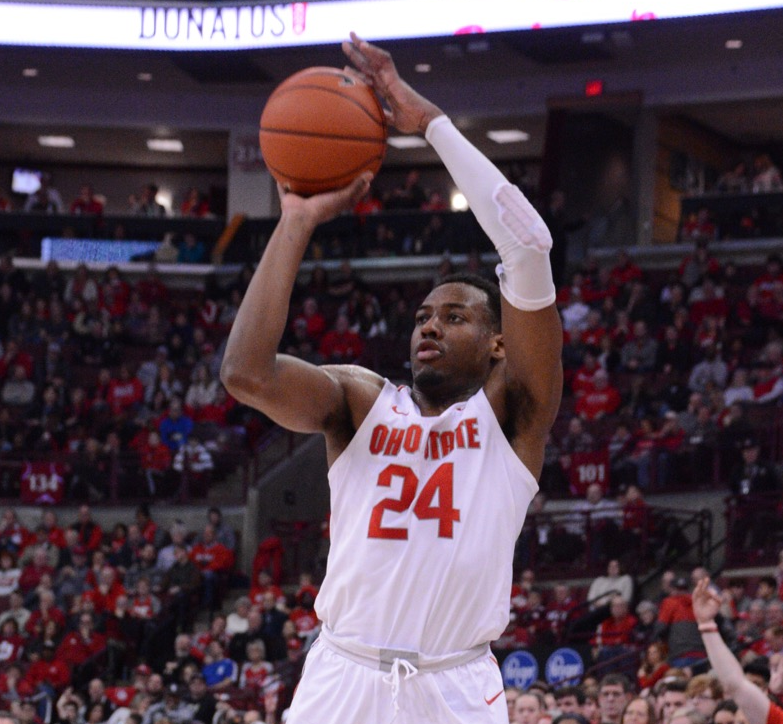 Failing to avenge its Jan. 3 home loss, Ohio State dropped a 70-57 loss to Wisconsin at the Kohl Center in Madison, Wis., on Feb. 9.

After surrendering a 16-0 run to end the first half, Ohio State opened the final frame with a 7-0 run to cut Wisconsin’s lead to 38-27.

The Badgers did not score for the first 3:22 of the second half but responded to the Buckeye run with an extended 18-6 streak spanning more than six and a half minutes (6:43) and pushing its lead to 20.

The Badgers led by as many as 24 in the second half, cruising to an easy home victory. Wisconsin fifth-year senior guard Brevin Pritzl led all scorers with 19 points, while fourth-year junior guard D’Mitrik Trice, a Hubert Heights, Ohio, native, added eight points and eight assists.

“We didn’t defend well enough,” Ohio State senior wing Andre Wesson said. “They were hitting a lot of shots. They’re real comfortable at home. We talked about it; we had to make them uncomfortable. And they just go tin a rhythm and they’re a tough team when they get in a rhythm.”

After Wisconsin took its biggest lead of the game at 63-39, Ohio State answered with an extended 16-4 run, spanning 6:47 and showing some resiliency in the lopsided affair.

“Any time you get down bad like that in a game, it’s kind of hard,” Andre Wesson said. “You’ve just got to keep fighting back. Our guys did fight back toward the end. We tried to cut it down a few times, just couldn’t keep it rolling.”

Former Ohio State big man Micah Potter, a junior, drew his first start as a Badger and opened the game with a three-pointer after blocking Ohio State junior big man Kaleb Wesson’s shot from behind.

Ohio State junior guard C.J. Walker put the Buckeyes on the board two minutes and 10 seconds into the game with a three of his own. But neither team scored again until Wisconsin freshman forward Tyler Wahl ended the drought with 14:24 until halftime to break a 3-3 tie.

Wisconsin pushed its lead to 7-3, but Ohio State answered with a 10-0 run capped by consecutive three-pointers from Andre Wesson.

“My teammates put me in great positions, got me the ball in great spots,” Andre Wesson said. “And I was able to knock some shots down, so it felt good.”

With 10:17 until halftime, the Badgers trailed the visiting Buckeyes 13-7 but fired off a 13-2 stretch spanning five minutes and 22 seconds to take a five-point lead.

After Washington and Potter traded baskets, Andre Wesson knocked down his third three-pointer in as many tries to cut the Badger lead to 22-20. After Ohio State cut Wisconsin’s lead to two points, the Badgers rallied behind their home crowd, holding the Buckeyes scoreless for the final 4:37 of the first half as part of a 16-0 rally.

“That was a big momentum turn,” Ohio State head coach Chris Holtmann said. “They shoot it really well at home. Our close-outs weren’t very good, but give them credit. They made a lot of shots.”

Three-point shooting and turnovers made the biggest difference in a 38-20 first half at the Kohl Center. While Ohio State shot a respectable 4 of 10 from deep, Wisconsin hit eight first-half triples at 44.4 percent. The Buckeyes also gave the ball away nine times with only four assists, while the Badgers dished 10 assists with only four first-half turnovers.

“Riding on a three-game winning streak, to drop this one definitely hurts,” Andre Wesson said. “But we’ve just got to get back in the gym, and get back to work.”