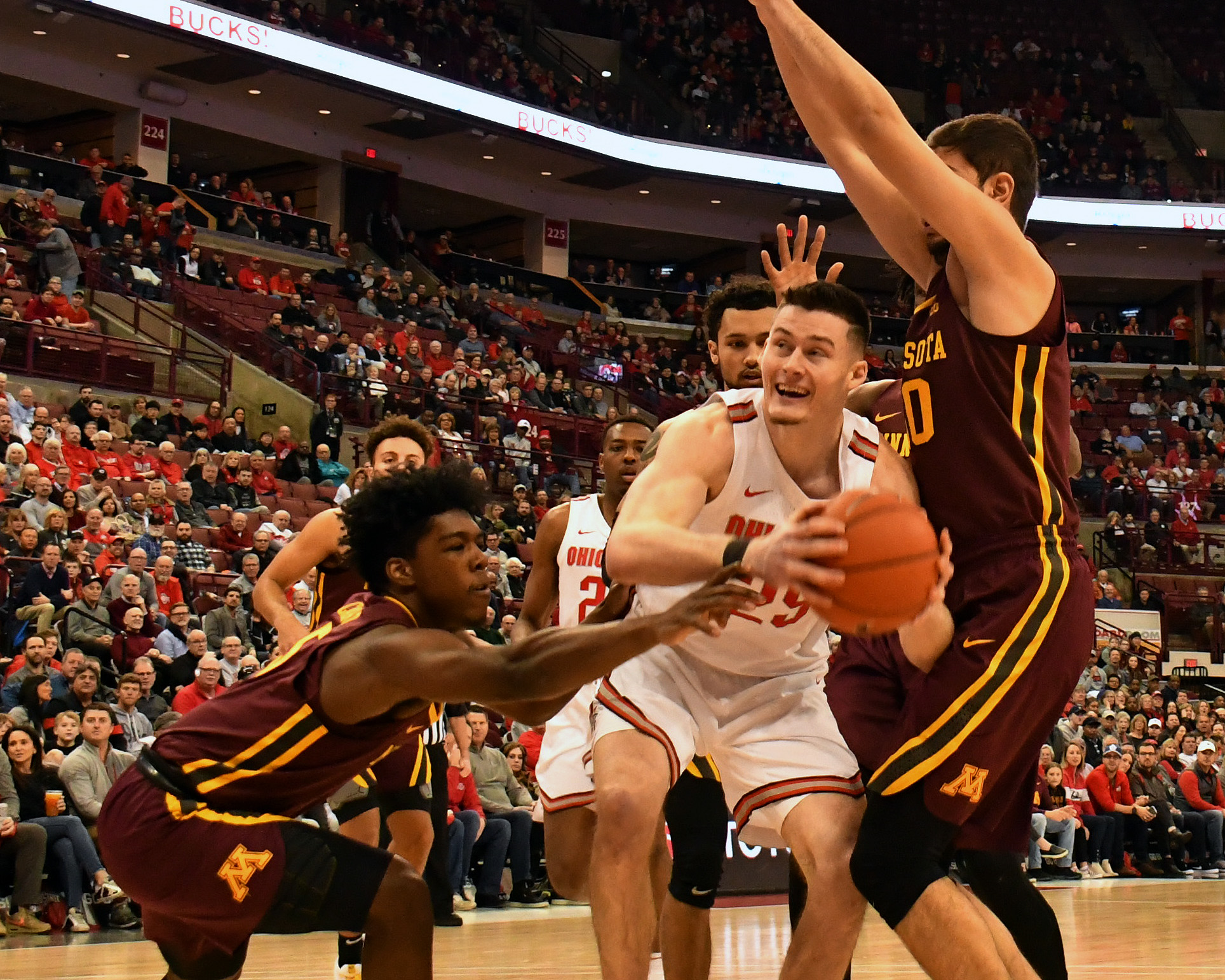 Ohio State fell 62-59 to Minnesota at the hands of standout guard Marcus Carr at Value City Arena on Jan. 23.

The Buckeyes trailed the Golden Gophers 57-55 with less than two minutes left in the game when Young threw down a dunk and made a layup on a pair of assists from junior big man Kaleb Wesson.

But Carr, a third-year sophomore, tied the game and then hit a clutch three-pointer off the dribble with 3.3 seconds left for the win. He finished with 21 points for the Gophers.

“It was a guard-to-guard switch, he hesitated, I contested, and he made the shot,” junior guard C.J. Walker said of Carr’s shot.

The Buckeyes had a balanced attack in the loss, with Young scoring 14 points with six rebounds, sophomore guard Duane Washington scoring 12 and Walker adding 11 points.

“Bottom line is we had other guys that were able to make plays with the attention (Wesson) was given,” Holtmann said.

Wesson opened the second half with a dunk off an offensive rebound for his first and only points, giving the Buckeyes an 11-point lead at home. However, the Golden Gophers cut that lead to three with a quick 8-0 run, led by four points from Carr.

Washington drilled a shot from deep to regain the lead for Ohio State, but Minnesota sophomore big man Daniel Oturu answered with a game-tying hook shot. Then, sophomore guard Luther Muhammad stole the ball and pushed it in transition until dishing to Walker for a reverse layup.

Minnesota sophomore guard Gabe Kalscheur connected on a clutch triple, seizing a 54-53 lead for the visitors with 4:52 remaining. Oturu extended the lead to three with a jumper from the foul line. Young converted a layup and drew a foul but missed an and-1 free throw that would have tied the game, but responded with the two finishes down the stretch.

The Buckeyes and Golden Gophers battled throughout a back-and-forth first half with Minnesota’s biggest lead coming at 15-10.

Ohio State responded with a 6-0 streak, which it turned into an 11-2 run. The rally was highlighted by five points from Washington coming on a smooth left-handed finish off the glass and a three-pointer.

The Golden Gophers answered with a quick 5-0 run, taking a 22-21 lead on a Carr triple. The teams went back and forth with Ohio State leading 24-23 with 6:01 until halftime.

The Scarlet and Gray ripped off an 11-3 run to take a 10-point lead, sparked by five points from Carton and four from Walker. Carton passed the ball to Wesson at the elbow and immediately relocated to the corner, where Wesson found him for a wide-open three-pointer, helping Ohio State take a 37-28 advantage into intermission.

Ohio State out-shot Minnesota from the field (50 to 37 percent), from beyond the arc (44.4 to 36.4 percent) and from the charity stripe (73.3 to 50 percent) in the first frame. The Buckeyes committed seven turnovers, while only forcing two Gopher giveaways, which helped keep the visitors in the game.

“In some ways we took a step forward in some areas,” Holtmann said. “Right now, we’re just not good enough in enough areas to win in this league. But I thought our guys competed, battled, played hard, were locked in, had a few errors that happened that get you in this league. We’ve got to find a way to answer the bell late in situations.”