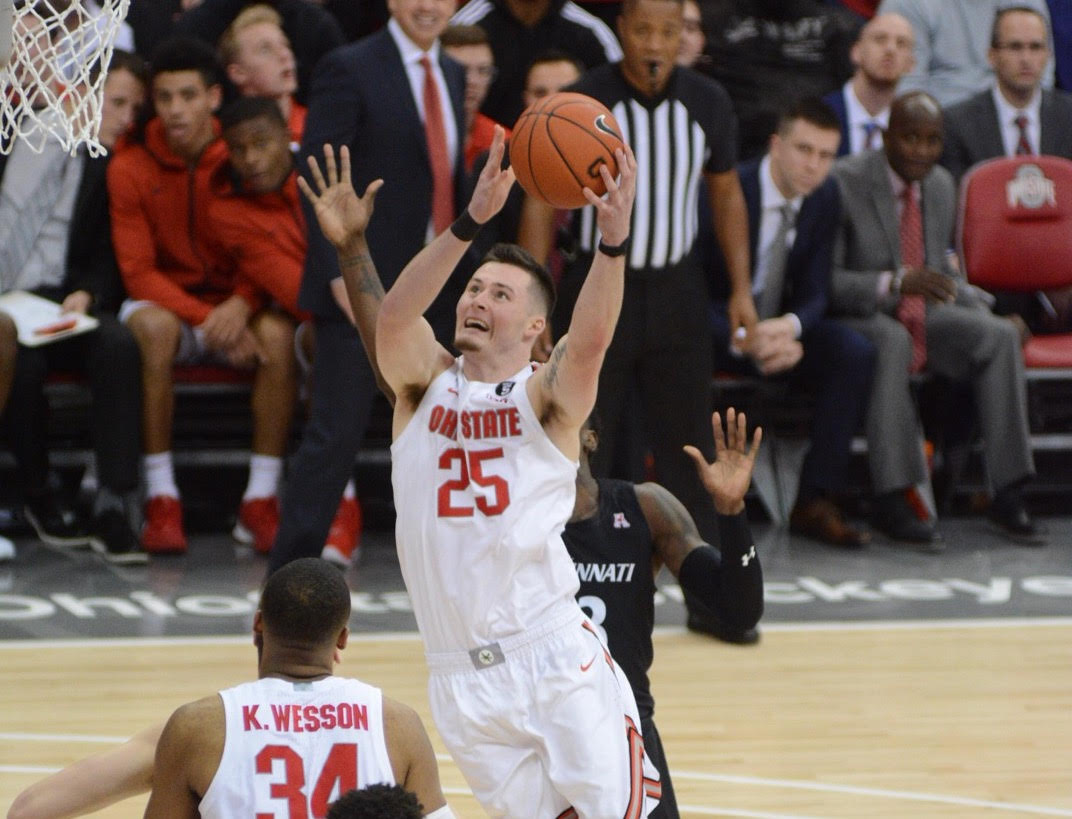 Junior forwards Kyle Young and Kaleb Wesson led the way for the Scarlet and Gray, with Young leading the team in scoring and rebounding with 14 and 13. Kaleb Wesson pitched in eight points and 11 boards.

The intrastate affair looked more like a rugby match than a basketball game, particularly in the first half when the Buckeyes committed eight turnovers and the Bearcats gave away six of their own.

“That was a good old-fashioned rock fight there, the most physical opening game I’ve ever been a part of,” Ohio State head coach Chris Holtmann said postgame. “Give Cincinnati a lot of credit; they disrupted everything we wanted to do game plan-wise going into the game.

“In the first half we could not run our offense so much so that we basically scrapped our offense at halftime and ran a variation, something we haven’t run all year. And our guys were great; they just played off instincts and really responded.”

Cincinnati sloppily took a 6-0 lead across the game’s first 7:40, holding Ohio State scoreless until Young threw down an emphatic dunk in transition to end the drought.

“There was a lid on it,” Kaleb Wesson said of the slow start. “Sometimes there’s a lid on the hoop. You take good shots, they just don’t fall. Just staying with the offense is something that we try to preach when we’re in our tight huddles and when the coaches are in there. Make sure we stay in our offense; trust the offense and make sure we get to the rim.”

Young added two more buckets before another Buckeye scored, which was Kaleb Wesson on a rebound putback to cut the Cincinnati lead to 10-8. The Scarlet and Gray seized their first lead when junior forward Andre Wesson hit a three-pointer in transition on a dish by junior guard C.J. Walker.

“Effort is a big thing,” Young said of the turnaround. “Coach preaches keep high energy, and I’ve got to be a guy in there that’s doing those types of things, getting extra rebounds and stuff like that. Another thing is trusting in these guys that we’re going to play well together, and stuff was just going in.”

The visiting Bearcats scored five points in a row before the Buckeyes regained momentum with a couple of excellent hustle plays. Sophomore guard Luther Muhammad stole the ball from Cincinnati point guard Chris McNeil and threw it ahead to freshman point guard D.J. Carton who finished with strength at the rim.

Holtmann was pleased with Muhammad’s effort, which resulted in six points, three rebounds, two assists and that steal.

“I thought he was really good,” Holtmann said of Muhammad. “Luther had some moments where he talked to me about his turnovers; I talked to him about his foul 35 feet from the basket. So, there are some things he can clean up, but he gave us quality minutes guarding (Jarron) Cumberland and he made some shots for us as well and got to the free throw line.”

Then, the Buckeyes tied the game at 15 on a wild sequence resulting in an Andre Wesson rebound putback. Young initially kept the possession alive when Muhammad missed a three-pointer and he grabbed the offensive rebound while falling out of bounds and saved it to Carton. The freshman floor general whipped a pass to Andre who found his brother Kaleb under the basket, where he missed. Andre grabbed his brother’s misfire and put it in for two points.

The Bearcats finished the first half strong, taking a 26-19 lead into the intermission, while shooting just 29.4 percent from the field (10 of 34).

The Buckeyes came out of the midway break with exceptional energy and it translated into points as they went on a 14-3 run to open the second half. Kaleb Wesson capped the crowd-inciting run with a three-pointer on an assist from Carton.

After extending their lead to 53-45 with 6:20 remaining, the Buckeyes seemed poised to maintain control and win the game. Led by Jarron Cumberland, Cincinnati roared back with a quick 8-0 run, trimming the Ohio State lead to just two points with 4:40 on the clock.

Duane Washington knocked down a clutch pair of free throws and Cincinnati junior center Chris Vogt answered with a dunk. Then, Ohio State sophomore guard Duane Washington drove the lane and once he got cut off near the basket, dished to freshman forward E.J. Liddell for a four-point lead.

After another big stop on defense, Carton nailed a pair of foul shots himself, extending the Ohio State advantage to 59-53. The Buckeyes buckled down on defense once again, and after a McNeil missed a three, Washington split a pair of free throws

McNeil drove the ball straight to the rack the next time he got it and converted an and-1 with the ensuing foul shot, cutting the Buckeyes’ lead to four.

Interestingly, Cincinnati elected not to foul down four with 52 seconds left. Walker drove the lane and drew a foul at the end of the shot clock any way. After McNeil turned the ball over, Walker drilled another pair at the charity stripe, securing a 64-56 Ohio State victory.