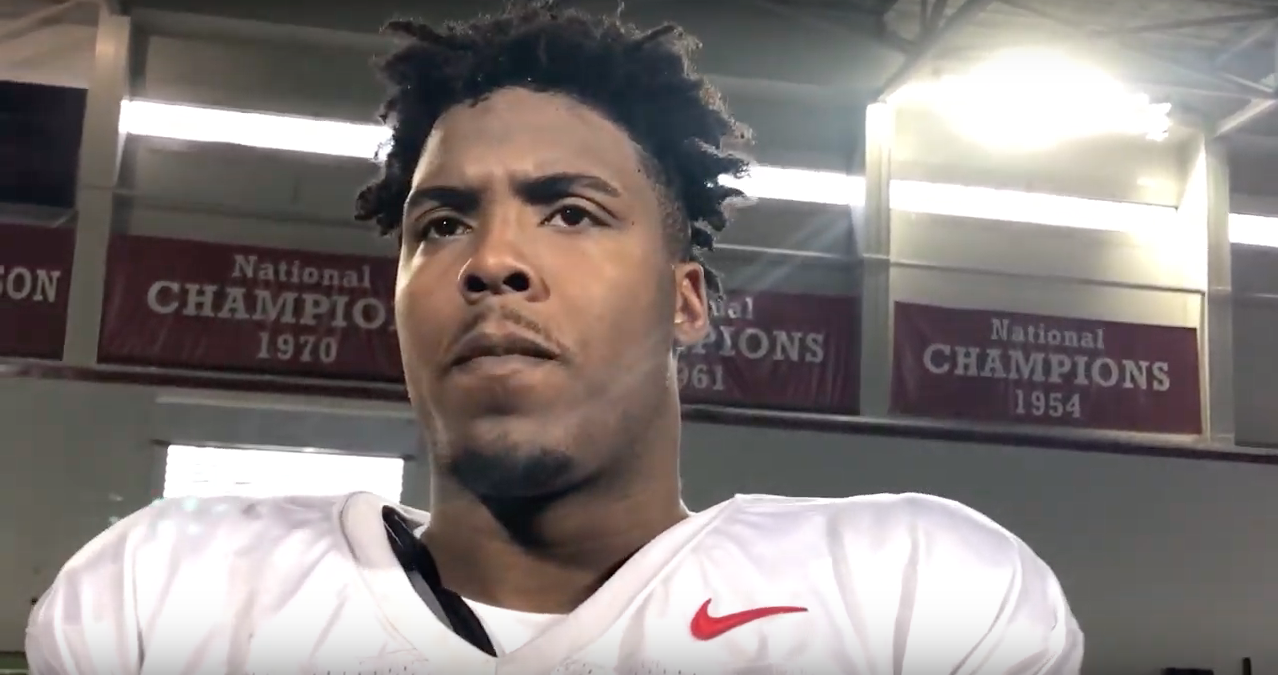 The Ohio State defensive line has developed the reputation as one of the nation’s best units under the tutelage of defensive line coach and associate head coach Larry Johnson.

The Buckeye defensive front jumped out to a strong start a season ago, but suffered a major setback when All-American defensive end Nick Bosa went down with a season-ending injury.

Defensive tackle Dre’Mont Jones stepped up admirably in Bosa’s absence, finishing second on the team in tackles for loss and sacks, but decided to forgo his final year of eligibility and enter the NFL Draft.

The Scarlet and Gray are not without returners on the D-line, however, with senior defensive tackle Robert Landers and junior end Chase Young, who led the team in TFLs and sacks as a sophomore, back for presumably one more season.

Outside of Landers and Young, the Buckeyes will need some less-experienced defensive linemen to step up and maintain the elite standard among the Rushmen.

Sophomore defensive end Tyreke Smith is up for the challenge.

“My expectations? Just to be the best I can for my team, to help the unit out as much as I can,” Smith said. “I’m trying to be noticed as one of the best D-linemen in the country. That’s my goal, and just do anything to help the unit be better.”

Smith (6-4, 267), who was the No. 34 overall player in the 2018 class, is a big man with big goals. After tallying nine tackles (one solo) in limited action as a freshman, the athletic end is striving toward reaching another level.

“Tyreke has always been quick, he’s always been in great shape, and now just learning how to play football,” Johnson said of Smith’s development. “You know, last year was a big learning experience. I can tell you that now we see the player he is possible to be. Tyreke’s got a great future ahead of him.”

The Cleveland native is excited about the opportunity for more playing time, but understands that everything must be earned among the Ohio State defensive line.

“Hard work, technique,” Smith said of what he needs to do to reach his goals. “Coach always says, ‘You got to get your toolbox together.’ And I think that my effort, and I think film is a big part, because last year I don’t think I watched as much film. I watched film but I mean, this year I’m really taking an initiative and going in everyday after practice watching film. Making sure my technique was right, making sure I can see plays before they happen, and then eliminate plays and play faster.”

Smith said he has been learning to pick up on the tendencies of an offense based on its formations in his film studies, in addition to enhancing the moves in his ‘toolbox.’

Johnson said he’s been impressed with Smith’s progression so far. He sits down with the members of his unit individually when they first come to Columbus and map out what their tenure as Buckeyes could look like. And according to his coach, Smith is on schedule.

“First year, we’re close to what we sat down as his goal,” Johnson said. “Year two is really important for him, where he goes goal-wise, I think this is a critical part. And guys who can handle the second year, really take off, so I’m waiting to see where he goes. I can tell you this — he wants it — and that’s half the battle.”

Smith has formed a strong bond with his defensive line coach, and while Johnson is easily old enough to be his grandfather, he is not surprised the two have become close.

“I think just his mindset, I got a mindset that I want to achieve greatness and I want to be the best I can be,” Smith said of Johnson, “and I think that he has the same mindset. I mean, I never set any limits for myself, so I just go as hard as I can. I always set high expectations, he does the same for me, so I think that’s where we have a good connection.”

Smith said he has been meeting with Johnson almost everyday after practice to review film and indicate the areas where he needs to improve. The Cleveland Heights product has big shoes to fill and perhaps even bigger goals to attain, but he has not lost perspective, expressing his gratitude for the opportunity to play for Johnson.

“It’s a blessing — I always think that, before anything, just to be in this position,” Smith said. “He’s the best D-line coach in the county, to me. So I think everyday I’m getting better out here just training with him. And still when I’m doing well, that’s not enough for him — and I like that about him. He pushes me to the limit — he thinks I could be elite — so I just like his expectations for me.”

Smith and Johnson both have high expectations for the budding pass-rusher entering his sophomore season. His performance will be critical for Ohio State to maintain its pedigree of first-class talent among the defensive line in 2019.