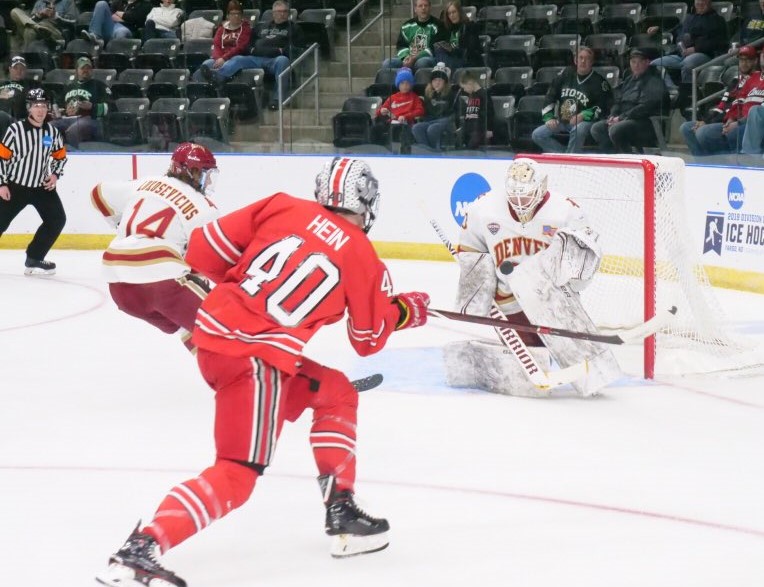 The third-seeded Ohio State men’s hockey team ended its season quietly with a 2-0 loss to second-seed Denver in the NCAA West Regional semifinal at Scheels Arena in Fargo, North Dakota, on Friday.

Les Lancaster scored late in the second for the Pioneers (23-11-5), Colin Staub scored into an empty net with 58 seconds left and Filip Larsson made 24 saves.

The Buckeyes are 4-9 in the NCAA Tournament and have been blanked three times. The other two were 1-0 to Boston College in the 2003 East Regional and 1-0 in overtime the next season by Wisconsin, also in the East.

The game was emblematic of OSU’s late-season struggles. The Buckeyes dominated for long stretches but did nothing with their chances.

Lancaster put the Pioneers ahead 1-0 with 40 seconds left in the second period after the Buckeyes had the better of the play before the defensive breakdown.

Emilio Pettersen gained the blue line but none of the three OSU players pressured him. That allowed Pettersen time and space to wait for Lancaster coming through the right wing. Lancaster took the pass in stride and beat Nappier from the circle.

OSU went on the penalty kill eight minutes into the third and made it 3 for 3 by not allowing a shot. The Buckeyes had a power play with 9:44 left in regulation but got only one shot.

The Buckeyes ended the season on a disappointing note after they met expectations by winning the Big Ten regular season title as the favorite.

With eight seniors and eight juniors this was supposed to be the season the Buckeyes took the next step. The seniors as freshmen lost their first seven games. The next season they made the NCAAs for the first time in nine years but lost in the West final in Fargo to Minnesota Duluth in overtime

Last season, the Buckeyes fell to Duluth in the national semifinal.

Nappier started his second straight game in the postsesaon after splitting the 34 regular-season games with senior Sean Romeo.

The Buckeyes were sloppy and rusty at the onset as might be expected for a team that had played once in 27 days since ending the regular season on March 2. The Buckeyes lost 5-1 at home to Penn State in the Big Ten semifinal on March 17.

But OSU soon regained its sharpness, which only made the scoreless first period more frustrating because the Buckeyes led in shots, 14-5, won 14 of 17 draws and had two of three power plays.

They also had the best scoring chance when freshman Quinn Preston broke down the middle only to be stopped on a breakaway by Larsson with 3:20 left.

Denver, whose eight national titles are one shy of Michigan’s record, has made the tournament 12 straight seasons for the longest active streak. The Pioneers last won the championship in 2017. They avenged a 5-1 defeat to the Buckeyes in last season’s Midwest Regional final that sent OSU to the Frozen Four for the first time in 20 years.

OSU was the oldest team in the tournament while Denver is the youngest with 19 freshmen and sophomores.