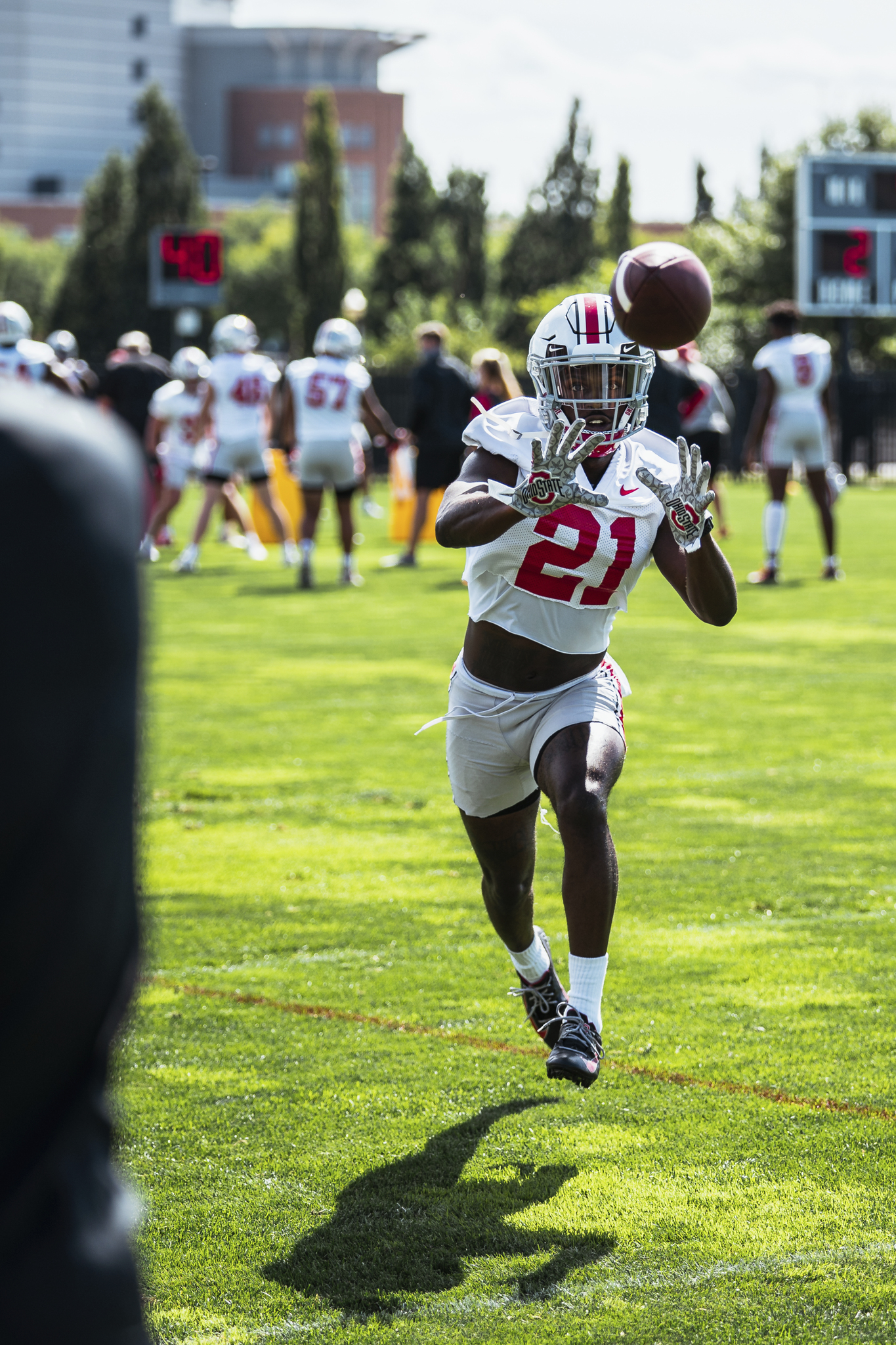 Marcus Williamson came to Columbus in the vaunted 2017 Ohio State recruiting class that included the top two high school cornerbacks and the No. 1 junior college corner in the country.

Jeff Okudah and Shaun Wade were five-star prospects out of high school, while Kendall Sheffield was a four-star recruit and the third-ranked JUCO prospect in the nation.

While Williamson was a four-star prospect and ranked as the No. 24 cornerback and No. 182 overall prospect in the country out of Bradenton (Fla.) IMG Academy, he entered a crowded cornerbacks room that already featured future first-round picks Denzel Ward and Damon Arnette.

Now in his fourth year with the program, Williamson will have a different defensive backs coach for the fourth time at Ohio State. For the first time since he was a freshman, Williamson will be coached by the man who recruited him, Kerry Coombs.

“If you know anything about Coach Coombs, you know he always brings the energy. I really think he’s brought a new life to the secondary,” Williamson said of Coombs, who was at Ohio State from 2012-17 before a two-year NFL stint. “We lost most of our starters from last year, so we’ve got a lot of young that haven’t been through the program. And Coach Coombs, he’s been here for a long time, and he’s able to really bring that culture and what we stand for here at Ohio State.”

After Coombs left for the Titans in the NFL, Williamson and his teammates learned from secondary coaches Taver Johnson and Alex Grinch in 2018 and Jeff Hafley and Matt Barnes in 2019.

“Every year it seems we’ve had some changes in our coaching, guys move on to the next level, or what have you. And I think all that coaching has brought so much knowledge and so many different techniques and styles that I’ve been able to utilize on the field,” said Williamson.

“I’ve had a lot of coaching, a lot of different coaches. I’ve been able to bring a lot of that football knowledge to the position along with my personal skillset. I’m excited to get started and get to work with Coach Coombs and have a great season.”

While Williamson gained valuable knowledge and experience under his previous coaches, there is no doubt that the Westerville, Ohio, native is excited to play for the coach who helped bring him back to Columbus as a recruit.

“Now that Coach Coombs is back, it’s really rejuvenated me and reminded me of why we come here,” Williamson said. “We come here to win championships and get to the next level. And Coach Coombs, he preaches that every day.

“We’ve had that relationship since I was 15 and he started recruiting me, so it’s great to have him back and every day we walk in with a smile on our faces ready to get to work.”

Coombs and Williamson are ready to work, but where does the former four-star corner fit into what seems to be a perpetually crowded cornerbacks room?

Juniors Sevyn Banks and Cameron Brown were the first two corners off the bench last season, and third-year sophomore Tyreke Johnson is a former five-star prospect who has impressed in camp. Coombs also helped bring all three of those up-and-coming Buckeye corners to Columbus, in addition to Wade, who is moving from his slot spot to the outside.

Moving Wade to the outside corner spot, where he will likely defend the best receiver on opposing teams, leaves a void at slot corner. Banks, Brown and Johnson are all expected to play on the outside, while redshirt freshman Ronnie Hickman and true freshman Cam Martinez will compete with Williamson at the slot spot.

At 5-foot-10 and 186 pounds, Williamson’s build best suits him for a slot corner spot, in addition to his footwork, short-area quickness, and strength.

“It’s a matchup business, right?” Coombs said. “If he’s playing more in the slot than he is outside simply because more of the slots we’ll play against will be similar size and stature players. Slot corner is going to major in short-space quickness, whereas the long corner on the outside is going to have probably a little bit more long speed and have some length at the line of scrimmage and press man-to-man against taller wide receivers.

“That’s been, to me, an easy transition for Marcus. I have a comfort level with that.”

Williamson, who transferred from Westerville South to IMG Academy prior to his senior year of high school, has faced more downs than ups in his injury-riddled Ohio State career. But the return of Coombs and the opportunity for playing time has sparked a fire in the former four-star recruit.

“Coach Coombs came in and he understood my career here hasn’t been ideal or hasn’t been perfect for me,” Willamson said. “But he’s brought that new sense of energy, and he came in the first day and told me, ‘You’re still the same player that I recruited, and let’s get to work.’ And we’ve been just been making extreme strides since he’s been here.”

For Coombs, he has always been high on Williamson, who is a three-time Ohio State Scholar-Athlete in addition to his athletic prowess.

“I recruited Marcus out of high school, I’ve always found him to be a thoughtful, intelligent player, who plays really, really hard,” Coombs said of Williamson. “He’s had an extraordinary offseason. He’s playing really well right now. I’m excited to watch him continue to grow and compete as the season goes forward. He’s had a really, really good fall and spring.”

After so many setbacks with injuries, crowded depth charts, and most recently COVID-19, Williamson is fired up to finally make a larger impact for the Buckeyes on the field. And since the shortened 2020 season will not count against his eligibility, Williamson still has two more years to leave his mark.

“I’ve had my struggles, and having this extra year, it’s given me a new lifeblood,” Williamson said. “I’m so ready to help this team and help us win, and that’s really the driving force behind it now that I’ve stepped into a leadership role. I just love this team so much and I just want to do whatever we can to win.” 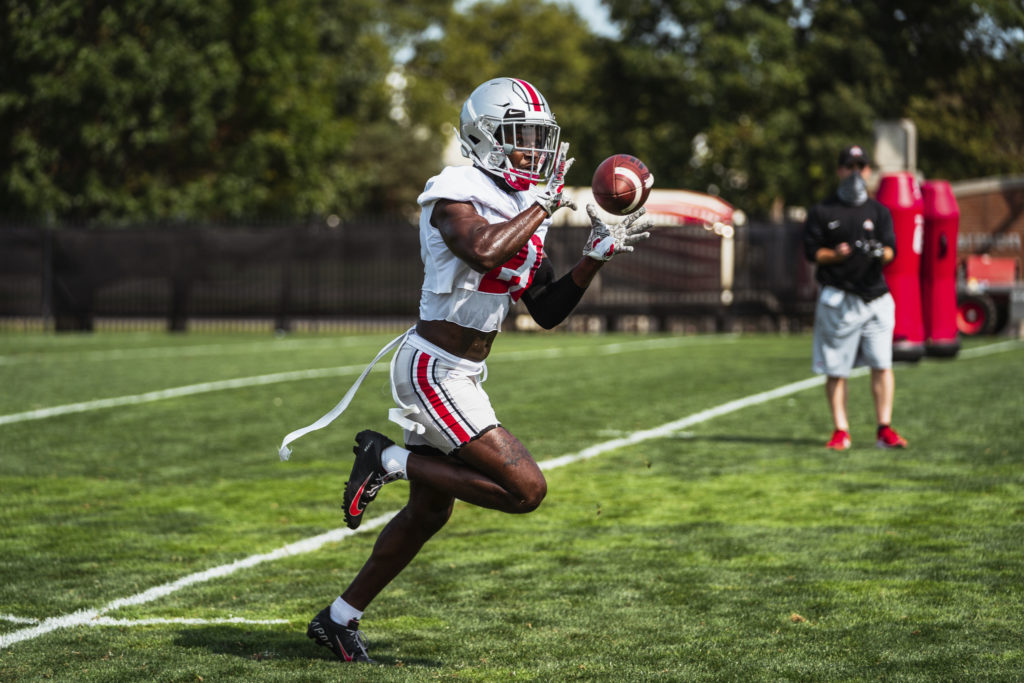