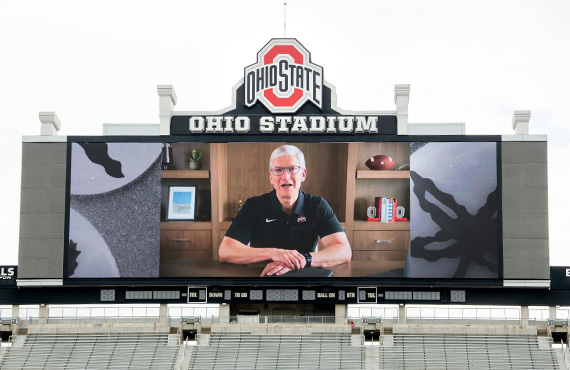 Join the conversation on this article in our Fan Forum

The Ohio State University awarded a record 12,967 degrees during a virtual commencement on Sunday afternoon, continuing the streak of largest graduating classes in school history for the sixth consecutive spring.

Congratulations, #OSUGrad Class of 2020! You are #TogetherAsBuckeyes, now and forever. ❤️ pic.twitter.com/rWlqkhvDDT

While there was a white tent and podium set up at Ohio Stadium for university president Michael V. Drake and other faculty members, Apple CEO and commencement speaker Tim Cook remotely joined the livestream to remind the graduates their accomplishments can not be diminished amid the worldwide coronavirus outbreak or by the lack of an in-person ceremony.

“In every age, life has a frustrating way of reminding us that we are not the sole authors of our story,” Cook said. “We must share credit, whether we’d like to or not, with a difficult and selfish collaborator called our circumstances. And when our glittering plans are scrambled, as they often will be, and our dearest hopes are dashed, as will sometimes happen, we’re left with a choice.

“We can curse the loss of something that was never going to be or we can see reasons to be grateful for the yank on the scruff of the neck, in having our eyes lifted up from the story we were writing for ourselves and turned instead to a remade world.”

“You have fought through adversity here to reach the finish line,” Holtmann said. “I know you’ll pursue the rest of your life with that same perseverance and grit.”

Join the conversation on this article in our Fan Forum