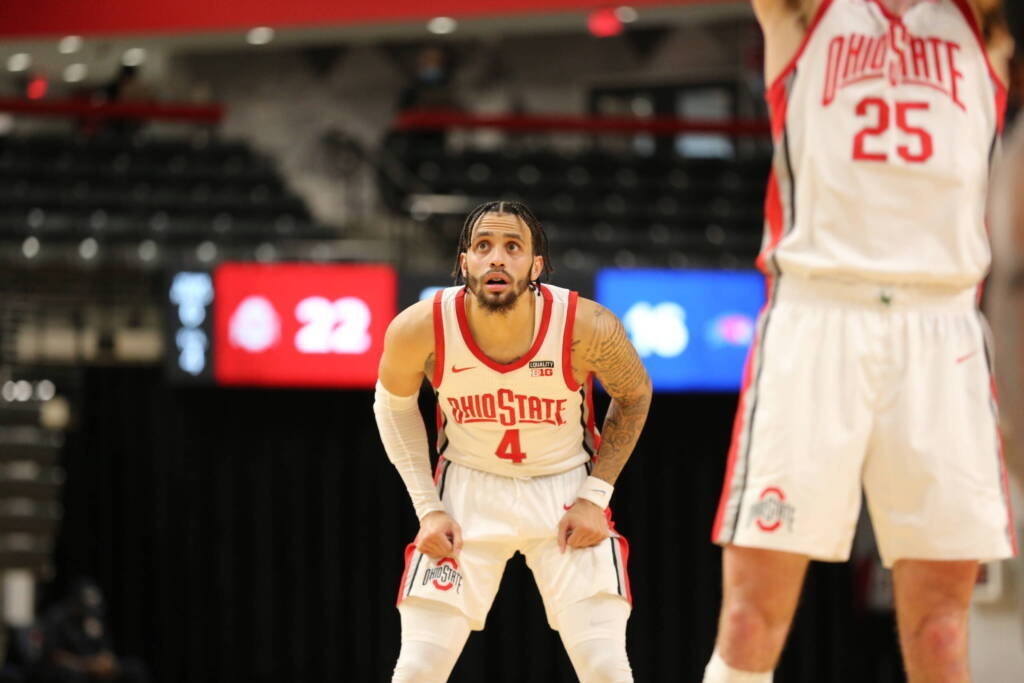 “I’m really, really proud of our guys,” Ohio State head coach Chris Holtmann said. “It was our best performance of the year against a really quality UCLA team that I’ve got tremendous respect for, that is going to be up near the top of the Pac-12, if not win it, and they’re clearly an NCAA Tournament team. They’re good. We played together more. We played with more poise and purpose on both ends.”

Stellar defense and timely three-point shooting led to a seven-point victory for the Buckeyes, who were paced by 14 points from junior guard Duane Washington Jr.. Freshman big man Zed Key played well on both ends and finished with 11 points and six rebounds, while freshman wing Eugene Brown connected on three triples for nine points.

“He made it clear that we did not play with enough poise late-game (at Purdue),” Brown said of Holtmann. “In this game, it was a different situation because we had the lead late game, but it definitely translated the way we handled situations, slowed down our offense, figured certain things out, and talked in transition.”

UCLA fourth-year junior forward Cody Riley broke up a 61-61 tie with a strong finish in the lane at 6:22, but the Buckeyes bounced back with an 8-2 stretch, highlighted by two triples by Brown to take a 69-65 lead with 4:37 on the clock.

“It all starts on defense. Defense translates to offense, so we need to get stops,” Key said. “The block – we were trying to rotate in transition, and we got two open threes from Eugene, and he knocked them down. That was definitely the turning point in the game because we were down at the time at that time and those threes really helped us get ahead and shift momentum in our favor.”

Brown was just glad to be trusted by his veteran teammates down the stretch.

“Honestly, it was a great feeling,” Brown said. “For my teammates to trust me and allow me to get back-to-back threes in a tight-situation type of game like that, it just proves that we’ve been working hard together and we’ve just been doing the little things throughout practice. It was a trust thing.”

“How critical were those two threes?” Holtmann said. “The young man comes in and defends well and then makes two threes that really changed the game, honestly.”

After UCLA fourth-year junior center Jalen Hill ended the 8-2 stretch with a powerful dunk to cut the OSU lead to 69-67 with 4:17 left, Ohio State scored four straight on a layup by Key and a pair of free throws by fifth-year senior guard C.J. Walker for its first lead of more than five points at 73-67 with 2:52 remaining in the game.

Neither team made a field goal in the final 3:53 following Key’s layup, but the Buckeyes made all six of their foul shots to close the game, while the Bruins went 1 for 2 from the charity stretch in that closing span.

Sophomore forward E.J. Liddell returned after missing the past two games with an illness, posting nine points in 19 minutes before fouling out with 7:21 left with Ohio State trailing 60-59. Washington drove past a Bruin defender and kissed a layup off the glass to tie the game at 61 with 6:53 remaining.

Key cut the Buckeyes’ deficit in half when he converted an and-one to trim the UCLA lead to 51-48 with 13:42 left, which incited his “finger guns” celebration that amused his teammates earlier in the season.

“I told everyone, every time it’s an and-one, I’m doing the finger guns,” Key said, “So, just be ready, don’t laugh, it’s going to happen.”

Sophomore guard Johnny Juzang countered with a triple for the Bruins, but junior wing Justin Ahrens answered with a three of his own for Ohio State.

Through the first four minutes of the second half, the Buckeyes and Bruins battled back and forth to a tie at 44. UCLA broke the tie with a 7-1 stretch sparked by a 5-0 spurt to lead 51-45 with 14 minutes to play.

After a pair of foul shots from senior guard Chris Smith pushed UCLA’s lead to 38-35 with less than two minutes (1:46) until intermission, Ohio State seized the lead with a 4-0 run to end the frame.

The Bruins took their first lead of the game at 26-25 with 7:15 before halftime, and he Buckeyes regained the advantage on a three-pointer by Brown to make it 33-32 with 4:06 on the first-half clock.

The Buckeyes extended their first-half lead to six points twice, both on Washington three-pointers at 22-16 and 25-19. After Washington put Ohio State up 25-19 on a corner three with 9:09 until halftime, the Bruins bounced back with a seven-point scoring streak to take their first lead.

After Ohio State and UCLA exchanged baskets, fourth-year junior wing Musa Jallow went on a solo 5-0 spurt in 33 seconds to give the Buckeyes a 17-12 lead with 12:54 until the midway mark.

Through the game’s first three minutes (3:03), the Buckeyes led the Bruins 7-2 with a Liddell triple and buckets by fourth-year junior wing Justice Sueing and Walker. UCLA responded with an 8-3 stretch, including a 6-0 run, to tie the game at 10 with 14:56 until halftime.

Riley led the Blue and Gold with 15 points on 7-of-9 shooting, while Juzang scored 13 and Hill added 10. After the Bruins shot 48.1 percent from the floor in the first half, the Scarlet and Gray held them to just 33.3 percent in the second half.

“We made a couple of strategy changes in some of their flow game,” Holtmann said, “but the biggest thing is we just stood our ground a little bit more on their ability to deck the ball.”