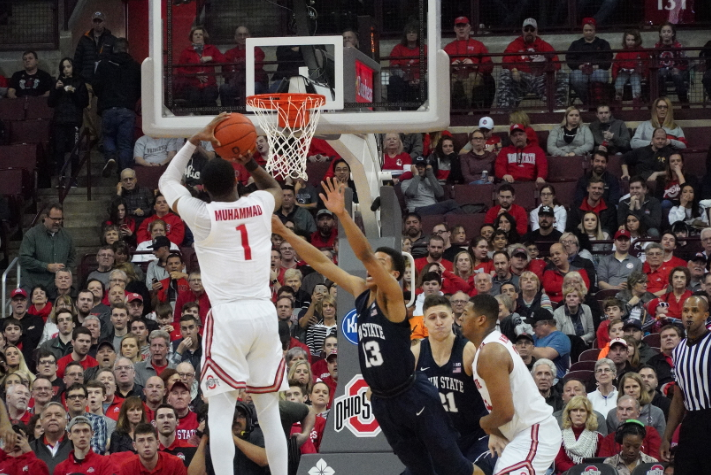 OSU sophomore Kyle Young, returning after missing four games with a stress fracture in his lower leg,  scored the go-ahead basket with 63 seconds for a 71-70 lead.

He then blocked a shot at the other end but Penn State retained the ball with one second left on the shot clock. On the inbound-play Lamar Stevens thought he gave Penn State a 72-71 lead with 32.2 seconds left but he did not beat the shot clock.

After Andre Wesson made one of two free throws for 72-70 Ohio State lead with 29.7 left, Rasir Bolton missed an open layup.  Penn State fouled C.J. Jackson and he made a pair of foul shots before Penn State missed two shots.

The Buckeyes were feeling good about themselves, carrying a double-digit advantage for most of the opening 20 minutes but let much of it slip away to lead only 34-31 at halftime.

After Penn State raced to an 8-2 lead in the first three minutes, the Buckeyes responded in a big way with an 11-0 run over a 3:53 span. A free throw by Stevens interrupted the run but Ohio State followed with 10 straight points and a 23-9 advantage with 9:30 left.

The Buckeyes were up 28-13 at the 5:16 mark on a baseline drive by Luther Muhammad and Penn State still trailed 33-20 with 3:04 to go when the Nittany Lions went on a 11-1 run to pull to within three points by the break.

Ohio State got a measure of revenge for last season when the Nittany Lions were a thorn in the side of the Buckeyes.

OSU was 25-9, including 15-3 in the Big Ten, in Holtmann’s first season but the Buckeyes lost all three games to Penn State, including the semifinals of the conference tournament.

“They beat us three times last year, probably one of the reasons we don’t have a (Big Ten) ring right now,” Andre Wesson said. “With that motivation coming into the game we knew we had to get this one.”

The Buckeyes next play at Indiana on Sunday.