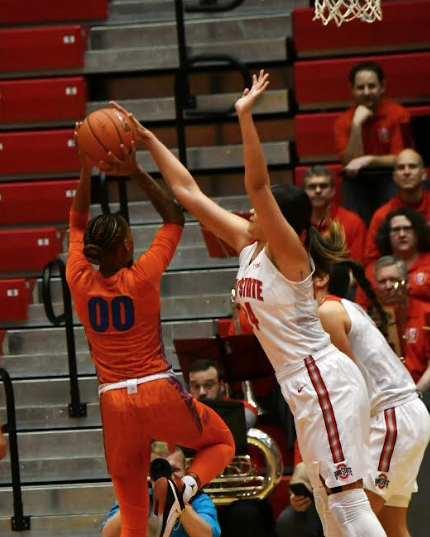 Three lethargic quarters led to an exhilarating final 10 minutes Sunday at St. John Arena, where the Ohio State women’s basketball team woke up from its afternoon slumber and answered against Florida down the stretch, coming back from nine points down and pulling off an emphatic 8-0 run for a 46-41 victory before 4,585.

“We were rushing,” Waterman said. “We were taking shots the first three seconds of the shot clock. They weren’t really guarding us on the perimeter, so people think, ‘Oh, they’re not guarding us. Let me shoot it.’ We’re just taking shots quickly. They’re shots that we can make, so I think people were taking them confidently. … But they were not guarding us on purpose — that’s what they wanted us to do. I think once we kind of got that in our heads, we moved the ball better.”

Florida jumped out of the gates on an 8-2 run in the first 2:07, starting with Delicia Washington’s layup and ending on Funda Nakkasoglu (game-high 14 points) triple between Waterman’s jumper 54 seconds put Ohio State on the board. Waterman knocked down another two from the top of the key to cut the Gators’ lead to 8-4 at the 5:49 mark, giving the Buckeyes momentum into the 4:46 media timeout.

UF came out of the break with Ariel Johnson’s three-pointer to push its lead to 11-4 at the 4:26 point. OSU answered with a 6-2 spurt in the final 2:56. Freshman guard Janai Crooms’ layup started the surge, followed by Patty’s layup at the 1:37 mark and Waterman’s with 1:11 left to keep Ohio State within 13-10 of Florida.

At the end of the first quarter, the Buckeyes welcomed back legendary guard Katie Smith (1992-96) at center court. She received a warm welcome from the home crowd at St. John Arena, honored for her summer inductions into the Naismith and Women’s basketball halls of fame.

OSU opened up the second quarter with the first four points, exclusively from Juhasz’s free throws at the 7:30 mark and layup at the 6:54 point, to take the 14-13 lead for its first of the game. But the Gators got back on the board with 5:46 left on Johnson’s jumper, giving UF its 15-14 edge into the 4:41 media timeout.

Cold shooting for both teams ensued out of the break, but Florida found enough of its groove to go on a 7-0 run into the 2:25 mark that made Ohio State head coach Kevin McGuff call timeout three seconds later. With the Buckeyes down 20-14, the Gators created further separation in the last 1:35, starting on Johnson’s splash from long range.

Crooms answered at the 1:05 point with a coast-to-coast layup, cutting UF’s lead to 23-16. Juhasz’s 0-for-2 trip to the charity stripe and Kiara Smith’s layup, 33 seconds apart in the final minute, bumped Florida’s advantage to 25-16 — its largest of the first half — before Grande got fouled with one second left and made both free throws to cut Ohio State’s halftime deficit to 25-18.

“I don’t think we let (trailing at halftime) affect us,” Santoro said. “We just kept saying, ‘Each possession, we’ve got to get a stop. We’ve got to come down and score.’ We kept saying, ‘Our defense turns into our offense.’ The main thing was us getting stops, rebounding and our transition offense. The second half, we really got that going and we were pushing the ball. That was really helping us.”

The Buckeyes started the third quarter strong, coming to life in the first 1:05 on graduate guard Najah Queenland’s corner triple and Santoro’s free throw, cutting the Gators’ lead to 25-22. UF and OSU traded answers between Washington’s jumper in the paint at the 7:52 mark and Waterman’s three-point play off a layup and free throw at the 6:10 point, but Florida’s three-point spurt into the 4:47 media timeout put Ohio State down 30-25.

After the Gators went up 35-26 with 2:15 left in the period, the Buckeyes answered behind a 6-2 spurt to close out the last 1:54. Patty’s pair of free throws were followed by Waterman’s layup at the 1:05 point, and Washington’s jumper at the 46-second mark was offset by Grande’s layup with 31 seconds left to keep the score within five points at 37-32.

OSU came to life to start the fourth quarter, bringing the home crowd back to life after Patty’s pair of layups into the 8:29 point forced UF head coach Cam Newbauer to call timeout 10 seconds later. Nakkasoglu gave Florida its answer when she drilled a three-pointer at the 8:07 mark and a free throw with 5:10 left, before and after Grande’s jumper at the 6:21 point, to keep Ohio State down 41-38.

In the final 4:58, the Buckeyes came to life, starting on Santoro’s free throws that cut the Gators’ gap 41-40. Queenland’s layup with 3:02 to go gave OSU its first lead of the second half, Santoro’s layup with 1:53 left extended the advantage to 44-41 and St. John Arena erupted to provide home-floor advantage in UF’s critical possessions.

Florida cracked on its last chance, handing the ball back to Ohio State with 35 seconds left when Zada Williams ran into Queenland. After a timeout by McGuff with 20 seconds to go, the Buckeyes inbounded from center court as Queenland found Juhasz for the layup with 17 seconds left to ice the 46-41 final.

“We’ve run that before, a couple times, late in games, but (Queenland to Juhasz) was the first look,” McGuff said. “Najah threw a great pass, everybody executed perfectly and that’s the thing — our kids did a really good job late in the game, coming out of timeouts and executing exactly what we wanted to do.”