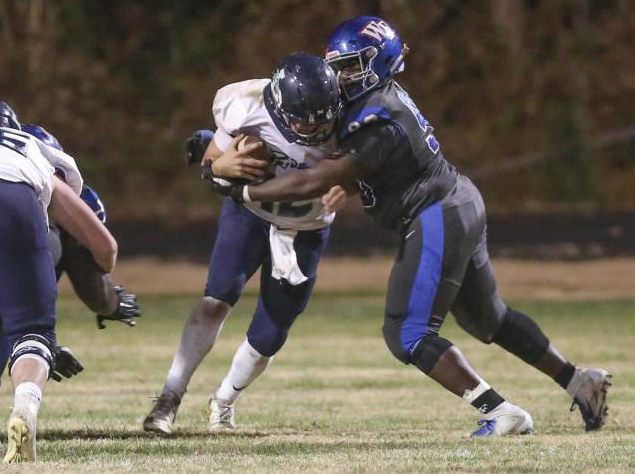 While majority of Ohio State’s 2019 recruiting class was already set for the early signing period, the early signing day brought a new addition to the haul when Wake Forest, N.C., three-star defensive tackle Jaden McKenzie joined the Buckeyes officially on Wednesday. He announced at 2:30 p.m. ET, sending in his letter of intent to OSU and giving head coach Ryan Day and defensive line coach Larry Johnson a win on the trail after they heated up their recruitment of McKenzie down the stretch.

The 6-3 1/2, 280-pounder picked up an offer from Ohio State on June 26. Among a flurry of scholarships the Buckeyes sent out to interior defensive linemen over the spring evaluation period and summer camp circuit, McKenzie’s offer from OSU marked his 18th at the time. He added scholarships from Clemson on June 28 and Georgia Tech on July 30 to reach 20 offers overall.

On the radar since the summer, McKenzie’s mutual interest in Ohio State rekindled late into the fall. He took his official visit to Columbus the weekend of Nov. 24 and saw the Buckeyes beat Michigan down 62-39 at Ohio Stadium. Two other targets — Owings Mills (Md.) McDonogh School four-star D’Von Ellies (6-2, 280) and Middle Village (N.Y.) Christ the King three-star Jared Harrison-Hunte (6-4, 286) — also officially visited campus that weekend as OSU searched for a defensive tackle.

Day and Johnson reportedly stopped in North Carolina for McKenzie on Dec. 11 for an in-home visit. Three days later, on Dec. 14, McKenzie led his high school program to its 45th straight win in a 9-7 edge of Charlotte (N.C.) Vance for the 4AA state championship. He had six tackles (one for loss) in his team’s defensive outing, ending its season 14-0 overall.