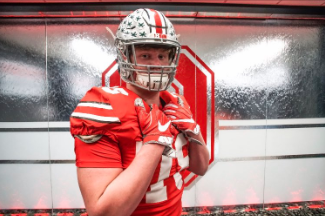 After multiple visits from head coach Ryan Day and offensive line coach Greg Studrawa to his high school, Jakob James added an Ohio State offer Monday and wasted no time when he committed to the Buckeyes on the spot.

The 6-5, 275-pound offensive tackle from Cincinnati Elder took to Twitter and shared his instantaneous decision to stay home at OSU — calling the opportunity “a dream come true” as he became the seventh member of Day’s 2020 recruiting class.

“Thank you to Coach Day, Coach Stud and to the rest of the Ohio State coaching staff for not only the offer but for accepting my verbal commitment to play football at The Ohio State University,” a note posted to James’ tweet read. “It is an honor and a privilege that I have grown up learning about, having a family that have both worn the Scarlet and Grey and are fans as well. As a kid, being an Elder Panther and playing football in The Pit is all I ever wanted to do. The next step is becoming part of a legacy and tradition that is OSU Football and Buckeye Nation…something I can’t wait to uphold and fulfill. Lastly, I would like to thank my teachers, coaches, and most importantly my entire family for their incredible support and belief.”