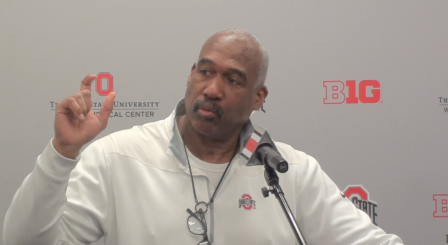 With Ohio State athletic director Gene Smith helping out, the NCAA is exploring the possibility of student-athletes profiting off name, image and likeness.

Among the two co-chairs on the NCAA Board of Governors Federal and State Legislation Working Group, Smith joins Big East commissioner Val Ackerman and 19 representatives across all three divisions — including presidents, commissioners and student-athletes — to examine recently proposed federal and state legislation.

Smith, who has been the Buckeyes’ athletic director since 2005 and became university vice president in 2016, said in an NCAA statement that the process would not lead to a pay-for-play approach but could change current policies.

“While the formation of this group is an important step to confirming what we believe as an association, the group’s work will not result in paying students as employees,” Smith said. “That structure is contrary to the NCAA’s educational mission and will not be a part of this discussion.”

“This group will bring together diverse opinions from the membership — from presidents and commissioners to student-athletes — that will examine the NCAA’s position on name, image and likeness benefits and potentially propose rule modifications tethered to education,” Ackerman said. “We believe the time is right for these discussions and look forward to a thorough assessment of the many complexities involved in this area.”

The working group will instead “focus on solutions that tie any changes to education; maintain the clear demarcation between professional and college sports; and further align student-athletes with the general student body.”

After an August update, a final report from the working group is due to the NCAA’s Board of Governors in October.

NCAA Board of Governors Federal and State Legislation Working Group