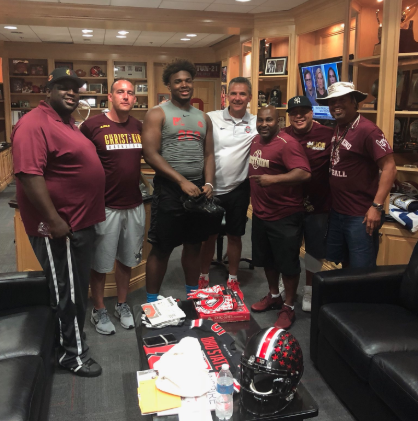 Among the top prospects from all across the country who flocked to Ohio State on June 22 for Friday Night Lights, a handful of notable players from New York packed into a van and made the trek west to Columbus.

Middle Village (N.Y.) Christ the King has flown under the radar in Queens, but a trio of targets to emerge over the past year has put the regional high school firmly on the map for college teams everywhere.

While none of them walked into the Woody Hayes Athletic Center with offers, Christ the King offensive coordinator Bruce Eugene told BSB about how the camp experience paid off for the Royals after the Buckeyes increased interest in three of his top players.

Three-star defensive tackle Jared Harrison-Hunte, four-star running back Tirek Murphy and quarterback Noah Bodden each emerged in their own ways onto OSU’s recruiting radar after they performed in front of the staff at Friday Night Lights.

Harrison-Hunte headlined the group with the way he earned his Ohio State offer, which came to fruition after Eugene and Christ the King head coach Jason Brown spent the spring evaluation period in contact with defensive coordinator Greg Schiano and defensive line coach Larry Johnson.

“He’s humble, getting an offer from a school like Ohio State,” Eugene said of Harrison-Hunte. “Especially with the history and tradition they’ve been having, it’s always an honor and especially for him only playing football for one year. When he received that, for him, it was like a blessing. He was excited just because of the caliber of school that Ohio State is, so he was excited.”

The Buckeyes have taken their time with Harrison-Hunte, who entered the equation of their 2019 recruiting class after he finished his first football season as a junior in 2017. Converted from basketball to play defensive line and tight end, Harrison-Hunte has natural athleticism in his freakish physical frame.

Harrison-Hunte received one-on-one attention from Johnson after he and the staff worked a June 1 camp at Rutgers, where OSU head coach Urban Meyer got an up-close look at the defensive tackle for the first time.

When they met in Meyer’s office after Friday Night Lights, Harrison-Hunte had Ohio State among his top choices as he sorts through his options and inches closer to a decision at some point in the fall.

“If he draws it out, it’s going to go until probably the first month of the season because he wants to,” Eugene said of Harrison-Hunte. “He has his top schools, but he wants to take his official visits just to make sure it’s the right decision. It’s not a four-year plan — it’s a 40-year plan.”

In the 24 hours to follow Friday Night Lights, Harrison-Hunte’s double-digit offer list added Tennessee when he camped June 23 with the Volunteers.

He holds additional scholarships from LSU and Penn State, where he camped June 16 with the Nittany Lions and won lineman MVP, among others.

Harrison-Hunte is the 247Sports composite’s No. 528 overall player, No. 33 defensive tackle and No. 2 prospect in New York.