No. 9 Ohio State Holds On To Beat No. 4 Michigan 68-67 To Advance To 2021 Big Ten Tournament Finals Behind 24 Points By Duane Washington Jr. 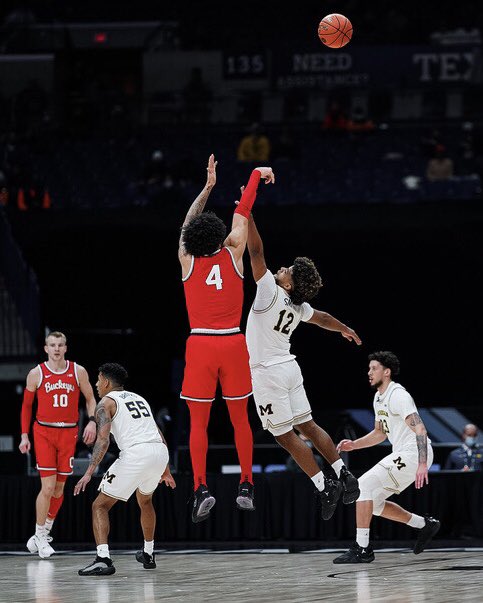 The No. 9 Ohio State men’s basketball team defeated No. 4 Michigan 68-67 in the semifinals of the 2021 Big Ten Tournament at Lucas Oil Stadium in Indianapolis on March 13, advancing to the title game.

“Any day I feel like Duane brings the same energy every single time,” Liddell said. “And today, I mean we needed him huge. And he came out there and produced, and that’s why he’s a big-time player.”

A Washington layup put Ohio State up 67-56 with 3:18 left, and the game appeared to be in hand, but Michigan never relented. The Wolverines responded with an 11-1 run, cutting the lead to 68-67 on a three-pointer by senior guard Chaundee Brown.

Ohio State forced graduate guard Mike Smith into a tough stepback jumper with great defense by Liddell on a switch on the final possession to survive and advance.

“In that last huddle we had before we actually turned the ball over for them to get another shot up on the rim, Coach said, ‘Hey, forget about everything else. We have one job, we got to score and get a stop,’ ” Washington said. “And we didn’t score, and I looked at our guys and said, ‘Hey, this is it, this is the one, this is the last 30 seconds working out with Coach Q [strength coach Quadrian Banks], this is it. Finish. And we pulled it out.”

The Buckeyes began the game strong, making three triples on their way to an 11-7 lead through the opening 5:38. Liddell drilled a triple as a trailer in transition from fifth-year senior guard C.J. Walker to regain a 14-11 lead for Ohio State with 10:50 until halftime, but Michigan responded with a 7-0 spurt in just 1:23.

Sophomore wing Fraz Wagner nailed a triple, and 7-foot-1 freshman center Hunter Dickinson connected on consecutive buckets to give the Wolverines an 18-14 lead with 9:27 until the midway point.

The Buckeyes bounced back with a 7-0 run of their own, sparked by a three-pointer by Washington on a nice find by Walker, followed by a Walker layup, and capped by a rebound putback by freshman forward Zed Key to take a 21-18 lead with 4:57 until the break.

Michigan answered with another 7-0 stretch across the next 3:33 on five foul shots and a layup by senior guard Eli Brooks, taking a 25-21 lead with 1:23 until halftime.

Graduate forward Seth Towns trimmed the first-half deficit to 27-26 on a three-pointer from the corner with 32 seconds on the clock.

In a highly competitive battle, Ohio State came out strong in the second half, taking a 29-27 lead when Washington hit a triple on its first possession just 19 seconds into action.

Liddell appeared to injure his hand on a tremendous shot block just 2:34 into the second frame, but the sophomore standout stayed in the game. He knocked down a triple to push the lead to 36-31 with 15:44 left.

Walker attacked the basket, drawing multiple defenders before finding Washington for a three-pointer to push the lead to 42-38 with 12:55 on the clock.

Michigan fired off five straight points to take a 43-42 lead with 11:40 left, but the Buckeyes bounced back in a big way with an 11-0 run. Washington knocked down a three-pointer, Key made a tough hook shot, and Liddell and Walker both converted and-one plays, giving them a 53-43 with 9:06 to play.

After a triple by Michigan senior guard Eli Brooks cut the Buckeye lead to 56-50 with 6:36 on the clock, Washington shook the Wolverines with one of the best plays of the game. He used a hesitation move, then shook Wagner with a fake spin and drove to the cup for an and-one layup, knocking down the foul shot for a 59-50 edge with 6:09 left.

The Buckeyes built their lead to a game-high 13 points on a rebound putback by junior wing Justice Sueing and a pair of free throws from Liddell to make it 63-50 with 4:19 to play.

Ohio State fourth-year head coach Chris Holtmann was pleased with the improved effort of his squad on defense, where it struggled mightily in a 92-87 loss to the Wolverines on Feb. 21.

“We executed this defensive game plan, maybe as well as any that I’ve coached,” Holtmann said. “They just were really locked in, and our guys were physical, they were tough outside of a couple fouls. They were phenomenal.”

The Buckeyes were without senior forward Kyle Young, who suffered a concussion against Purdue in the quarterfinals. The starting forward from Canton, Ohio, entered Ohio State medical protocols and will be evaluated daily.

Michigan did not have senior wing Isaiah Livers, who entered the game as the Wolverines’ second-leading scorer at 13.1 points per game.

Ohio State will take on the winner of the matchup between Illinois and Iowa in the championship game of the Big Ten tourney on March 14 at 3:30 p.m. ET on CBS.

“Everybody’s going to get some treatment tonight, a lot of sleep,” Liddell said. “I mean, we beat both of those teams before, and I just know we can go out there and do them. We’ve won three games, but we’re trying to go out there and win a fourth, and we’ve got to to keep our heads on straight and stay connected.”