No. 9 Ohio State Falls 91-88 To No. 3 Illinois In Overtime Of 2021 Big Ten Tournament Championship Game Despite 32-Point Effort By Duane Washington Jr. 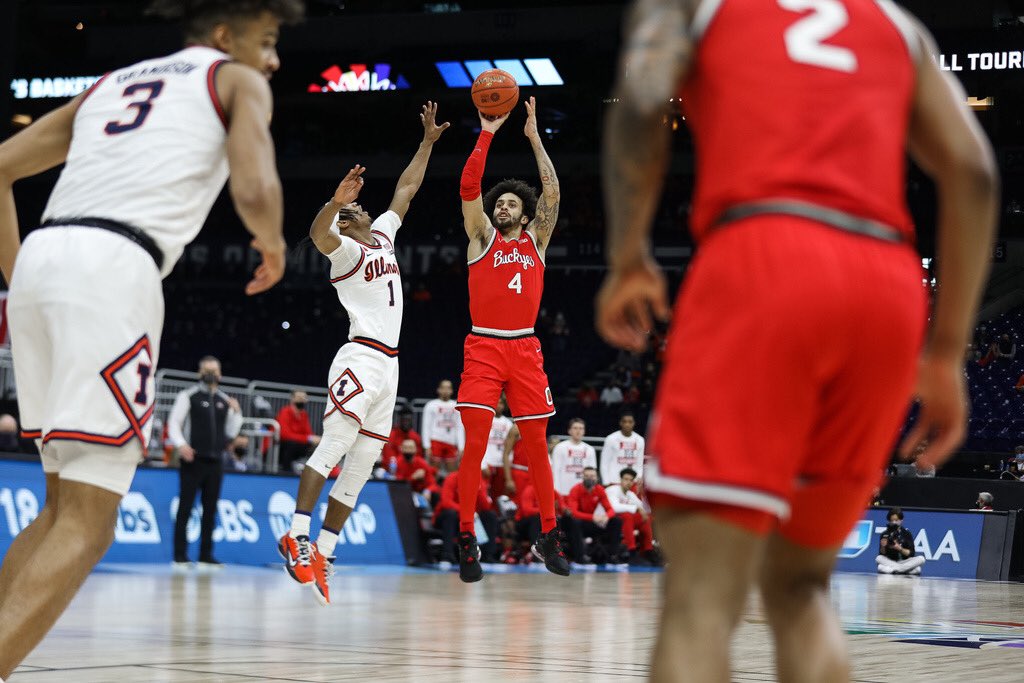 The No. 9 Ohio State men’s basketball team fell 91-88 to No. 3 Illinois in overtime in the 2021 Big Ten Tournament Championship Game at Lucas Oil Stadium in Indianapolis on March 14.

Junior guard Duane Washington was stellar in the loss for the Buckeyes, scoring a career-high 32 points on 12-of-21 shooting with eight rebounds. Junior wing Justice Sueing added 22 points in the tough overtime defeat.

“I’m most definitely proud of my team,” said fifth-year senior guard C.J. Walker, who finished with 16 points and six assists. “Most definitely I’m hurt because we lost — I wanted to win a Big Ten title — that was a dream for us at the beginning of the season. That was a big goal for us.”

Illinois freshman guard Andre Curbelo opened overtime with a pull-up jumper to take a 79-77 lead with 4:36 left, and Walker tied it up 29 seconds later on a pair of foul shots.

After Illinois junior guard Ayo Dosunmu split a pair of free throws, Washington came up with one of the biggest plays of the game down 80-79. Washington blew past Dosunmu and lifted a left-handed layup above the 7-foot-1 sophomore center Kofi Cockburn for an 81-80 Ohio State lead with 2:50 to play.

Cockburn began the contest 3 of 9 from the foul line, but he hit a pair of clutch free throws with 1:39 left to regain an 82-81 lead for the Illini.

Liddell lost the ball on a drive for an untimely turnover with 1:10 on the clock, and Curbelo capitalized with a pull-up jumper to push the lead to 84-81 with 50 seconds left.

Following another costly turnover on an errant pass by Sueing with 39 seconds left, Curbelo knocked down two free throws to go up 86-81 with 33 seconds left.

After getting poked in the eye on his crossover, Washington fired a tough shot and missed before the Buckeyes were forced to foul Cockburn, who hit 1 of 2 to make it 87-81 with 26 seconds remaining.

Graduate forward Seth Towns drilled a triple for Ohio State to cut it to 87-84 with 17 seconds left. Then, Dosunmu knocked a pair of foul shots down with 14 seconds left to push the Illini edge to 89-84.

Towns split a pair of foul shots before the Illini converted another pair at the line to put the game out of reach at 91-85 with 3 seconds left. Walker drained a three at the buzzer to make it 91-88, but it was not enough.

“It was a well-played, hard-fought game,” Ohio State head coach Chris Holtmann said. “Give them credit on winning the tournament championship and an outstanding season. I thought our guys battled and really fought. Obviously, we’ve got a disappointed, emotional group, but we’d expect nothing less given what this group has been all year.

Illinois controlled the contest early on, roaring to a 27-10 start through the opening 10:15 with Cockburn and Dosunmu leading the way with nine and seven points, respectively. Meanwhile, the Buckeyes went 1 for 16 from the floor during that span.

“We settled a little bit too much offensively,” Holtmann said. “And then, we had to change our ball-screen coverage because we were getting picked apart. We thought it was the correct way, we just had to make some adjustments there. And then honestly, I thought that we had to get into the rhythm of the game. I thought some of finesse offense led to some of our finesse defense.”

Walker stole the ball from Dosunmu, and took on the entire Illini defense on his way to the rim for a tough floating layup to bring the deficit to 31-20 with 4:39 until halftime. The Illini responded by pushing their lead to 36-22 on a bucket by Curbelo with just 3:34 until intermission.

The Buckeyes showed great grit, ripping off a 10-1 run across the next 2:41 to cut the Illini lead to 37-32 with 53 seconds until the break. Walker scored one basket and found Sueing for a triple, while Washington added five points with an and-one and a layup during the stretch.

“I was incredibly proud with our response and our effort,” Holtmann said. “The people that know and care about the program, I’m pretty confident will feel the same way. I got a text from Evan (Turner) right after the game, I haven’t had a chance to read it yet. But we work really hard to make guys like that proud, and I believe that was some of the sentiment. That means a lot to us.”

Ohio State seemed poised to take over the game when Cockburn picked up his third foul just 4:29 into the second half, and Liddell cut the score to 45-43 with a bucket in the lane 11 seconds later.

However, Cockburn’s backup, junior forward Giorgi Bezhanishvili asserted himself with a dominant spurt in the paint, grabbing four offensive rebounds and scoring 10 points with two old-fashioned three-point plays as part of a 12-3 stretch that pushed Illinois’ lead to 57-46 with 11:58 left.

Washington drilled a three-pointer to tie the game at 65 with 6:10 left, and Walker followed it up with a tough basket in the lane to take the Buckeyes’ first lead of the game at 67-65 with 5:35 remaining.

After the Buckeyes took their first lead, Illinois fired off a 7-0 streak capped by a triple by senior guard Trent Frazier to take a 72-67 lead with 3:31 left.

Washington made a layup, but Dosunmu answered with a clutch shot from deep to put the Illini up 75-69 with 2:40 on the clock.

Up against the clock, Ohio State rose to the occasion with a tournament title on the line, with Washington nailing a three-pointer and Liddell throwing down a two-handed dunk after a defensive stop to cut the deficit to 75-74 with 57 seconds left.

Illinois senior guard Da’Monte Williams responded with a clutch jump hook in the lane to push the lead to 77-74 with 34 seconds until the end of regulation, but Sueing stepped up under pressure.

Sueing drove the lane and missed a tough shot in the lane, but he stuck with it, grabbed the rebound and put it in despite a foul. Sueing knocked down the foul shot to tie the game at 77 with 23 seconds left, and Ohio State shut down Dosunmu to force overtime.

Liddell struggled from the floor, shooting 3 of 16 and 0 of 7 on threes, but he made 6 of 8 free throws for 12 points and found other ways to have an impact. The standout sophomore added seven rebounds, four assists, three steals, and two blocks.

Though the Buckeyes came up short of their goal, Holtmann came away thrilled with the heart show by his players in representing Ohio State men’s basketball.

“They carry the weight of making every former Buckeye proud, and every Buckeye fan loves this university, and I told them they did,” Holtmann said. “We came close to a championship, and it’s exceedingly disappointing. But what I’m not disappointed in is their resolve, their fight, and their effort.”

The Scarlet and Gray earned a No. 2 seed in the NCAA Tournament, which starts on Thursday, March 18. Ohio State is expected to play Friday, March 19 against No. 15 seed Oral Roberts.

“I’m really proud of my team,” Walker said. “I don’t regret anything that happened today. We fought, we stayed together we stayed connected. Those are all the things I said before the Big Ten Tournament started that that’s what we needed to do. I feel like that’s what we did throughout this tournament. We’re just getting prepared for March Madness, trying to bounce back and go win a national title.”