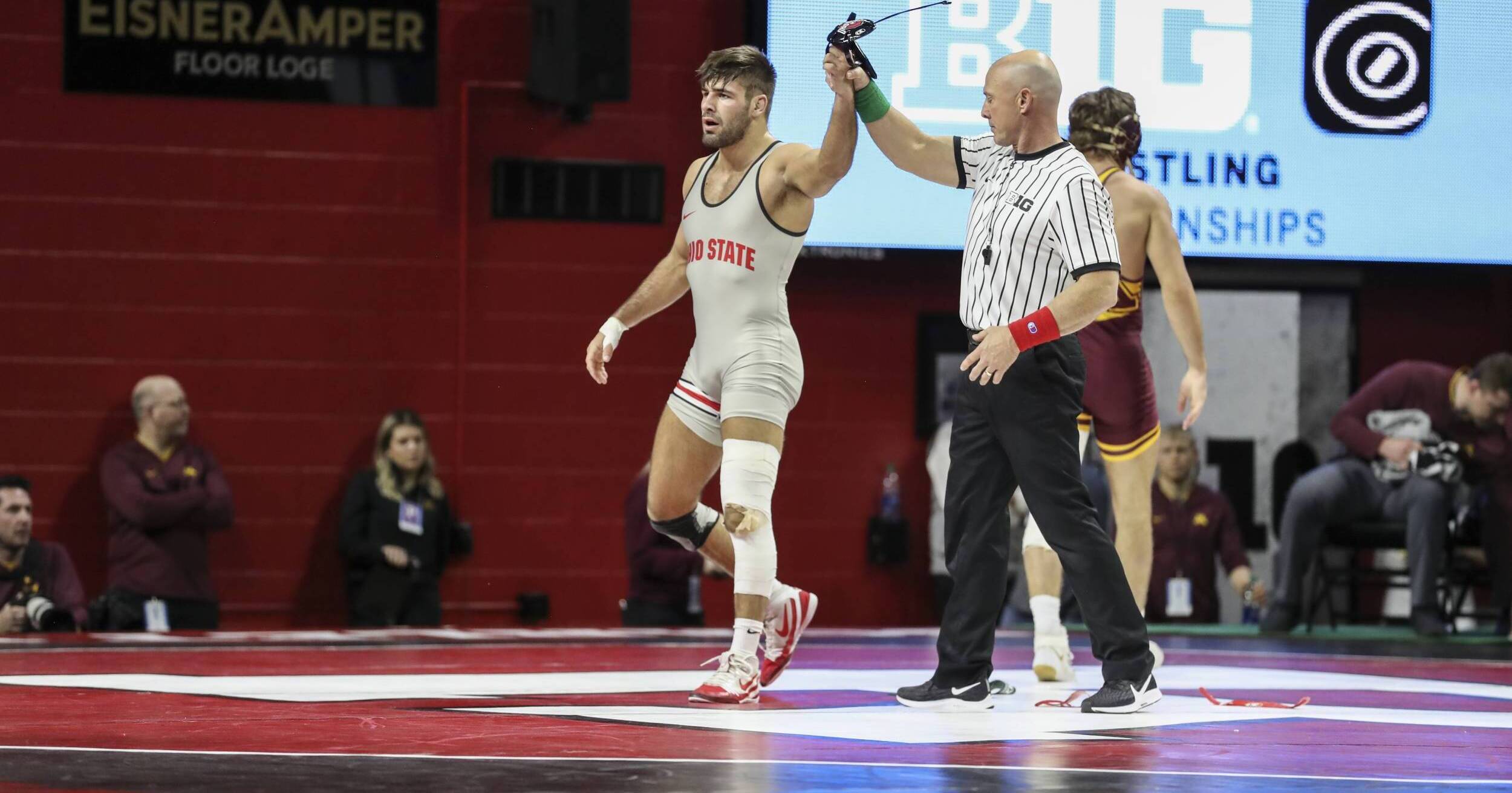 No. 7 Ohio State looked every bit like a team that hadn’t taken the mat for a competitive match in well over nine months. Unfortunately for the Buckeyes, their first opponents at the season-opening tri-meet in Champaign, Ill., No. 24 Illinois, had no such issues. OSU dropped its first match of the 2021 season to Illinois, 18-15, but bounced back against No. 21 Wisconsin, 25-9, leaving the event with a 1-1 record on the year.

It was an inauspicious start for the Buckeyes against Illinois that just got worse, with 165-pound junior Ethan Smith falling to No. 8 Danny Braunagel. Smith took a 4-3 advantage into the third period but faltered late, succumbing to a takedown in the final minutes that allowed Braunagel to escape with a 6-5 victory.

Junior Kaleb Romero (No. 4) provided a quick response for the Buckeyes at 174, however, securing a dominant 8-1 victory over D.J. Shannon. No. 9 Rocky Jordan’s sophomore season got off to a rocky start against No. 10 Zac Braunagel in the next match at 184 pounds, falling 2-0 after allowing an escaping and losing the riding time point, giving the Fighting Illini a 6-3 advantage through three bouts.

Sophomore Gavin Hoffman, in his first battle at 197 pounds after dropping down this offseason from heavyweight, fell 4-2 to Matt Wroblewski, extending the Illinois lead to 9-3 with No. 6 Utah State transfer Tate Orndorff left as the last hope for the Buckeyes on mat 2 in his debut for the Scarlet and Gray.

With his new squad in need of a victory, Orndorff could not deliver against No. 25 Luke Luffman, falling 3-2, giving Illinois a 12-3 team score lead through the first five bouts, heading into the lightweight matchups on mat 1.

The top half looked set to open in the same way that its counterpart had closed – poorly – before a late takedown and several nearfall points from junior Malik Heinselman (No. 21) landed the Buckeyes a crucial 9-2 victory over No. 13 Justin Cardani, cutting the deficit to 12-6 with four matches to go.

Sophomore Jordan Decatur (No. 25) couldn’t keep up the positive momentum for the Buckeyes, falling 1-0 against Lucas Byrd, putting the Buckeyes up against the wall, needing three straight victories at 141, 149 and 157 to avoid a loss to the Illini.

Despite a valiant effort, they found no such luck. Redshirt freshman Dylan D’Emilio opened the home stretch and his duals career the right way for the Buckeyes at 141, taking a 7-6 lead over Danny Paccino into the final minute, but a late scramble was enough for Paccino to claim a 12-7 decision and push the Illini lead out of reach for the Buckeyes.

In what looked to be the bout of the day on the lineup sheets, national title contender and top-ranked sophomore Sammy Sasso faced off against No. 7 Mike Carr. Sasso did as he is wont to do: pinned the Illinois standout to the mat almost immediately, earning the Buckeyes six points and keeps hopes alive, albeit with very slim odds, 18-12 entering the final bout between No. 22 Elijah Cleary and Johnny Mologousis.

Cleary did enough to secure his first victory of the season, 3-2, but not enough to stave off defeat for the Buckeyes, with Illinois taking the dual, 18-15.

The bottom half of the Ohio State lineup fared better against the Badgers, with Smith securing his first victory of the season in a 5-3 decision over Josh Otto to open the scoring for the Buckeyes. Romero grabbed another win against Jared Krattiger, 9-5, to improve to 2-0 on the year and to extend the Buckeye lead to to 6-0.

A 9-4 victory for Jordan over No. 13 Chris Weiler kept the good times rolling for Tom Ryan’s group, as did Hoffman, knocking off Andrew Salemee, 8-3. Orndorff couldn’t complete the sweep for the Buckeyes and suffered a fall against No. 5 Trent Hillger, sending the top half of the lineup back onto the mat holding a 12-6 advantage.

The Buckeyes would not squander that advantage through the final quarter of the tri-meet, with Heinselman notching a major decision (13-5) over Eric Barnett and Decatur claiming a 6-4 decision over Kyle Burwick. Cuban freshman Anthony Echemendia grabbed his first victory in his Buckeye debut over Trey Escobar at 141 pounds, while Sasso and Cleary finished off the meet, with Sasso knocking off Drew Scharenbrock, 12-5 and Cleary falling to Garrett Model, 3-2, giving the Buckeyes a resounding 25-9 victory over the Badgers.