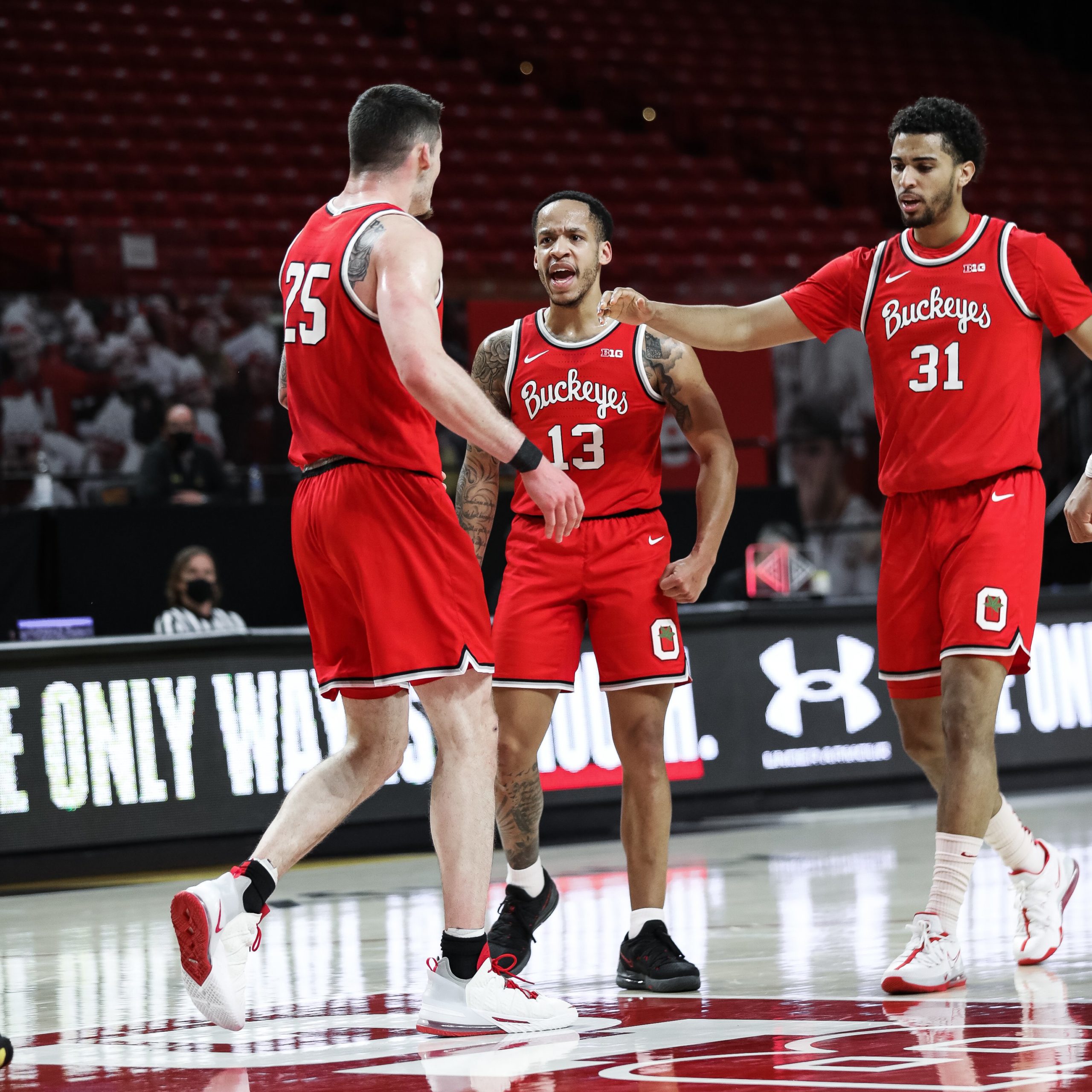 The No. 4 Ohio State men’s basketball team defeated Maryland 73-65 at Value City Arena on Feb. 8 for its fifth straight win and seventh in eight games.

“He’s one of a kind, man. Kyle Young is the hardest working player I’ve ever played with, and it’s special. It goes unnoticed a lot, and tonight he got to get his career high – I’m so happy for him,” Washington said. “I’ve just been giving him confidence, believing in him at the highest level and rewarding him as much as we can.

“I mean, it’s hard to ask a guy to do that, and he’s really bought into that role. And as you can see, it showed itself tonight and it’s going to show itself way more throughout the year.”

Ahrens’ triple came after he stole the ball and gave it up to fifth-year senior guard C.J. Walker, who drove all the way to the hoop to collapse the defense before kicking it out to the sharpshooting lefty from Versailles, Ohio.

“Our guys have done a good job finding (Ahrens),” Ohio State head coach Chris Holtmann said. “C.J. Walker’s play on the break to him was terrific.”

Ohio State played strong in the paint throughout the game, highlighted by a two-handed putback slam by Young to push the lead to 64-49 with 5:51 left.

Maryland answered with a 6-0 spurt in just 1:35 of action to cut the deficit to single digits at 64-55 on a dunk by senior guard Darryl Morsell with 3:58 to play.

After the Buckeyes and Terrapins exchanged a pair of foul shots, Walker finished strong following a Young steal and then sophomore forward E.J. Liddell threw down a ferocious slam on an alley-oop from Washington to push the lead to 70-57 with 69 seconds left.

The visitors ended the game on an 8-2 run to make the final score a respectable eight-point loss at 73-65, but Ohio State controlled the contest after its mid-game run.

In the first half, Maryland jumped out to a 13-5 lead through the game’s first 6:17, partially thanks to three turnovers by Washington. The Buckeyes bounced back with a 9-0 spurt sparked by two triples from Washington followed by one by senior forward Seth Towns to take a 14-13 lead with 12:35 until halftime.

The Terrapins responded to the Buckeyes’ sharpshooting, regaining the lead and pushing it to 25-19 with 6:25 until the midway point. Ohio State answered with a game-breaking 14-1 rally starting with three-pointers by Washington, Ahrens and Walker.

“We came out a little slow in the beginning, but we needed to turn that around really quick and play with more toughness, aggressiveness,” Young said. “Once we started to do that, the game started to turn around a little bit.”

The Scarlet and Gray will welcome Indiana to Columbus on Feb. 13 following their fifth straight win.

“We’re just really locked in and really trying to get better every single day, man,” Washington said. “We’re doing a really good job working hard and staying with each other, staying connected and trusting what we’ve got going on here, and it’s paying off. We’re going to keep grinding. We’ve got a great team coming to our house on Saturday (Feb. 13), so we’re going to get back to work as soon as we get back, and watch the film, analyze it, learn about it, forget about it, and move on.”