No. 20 Ohio State Takes Down Duquesne With Ease, 82-47 In Season Opener 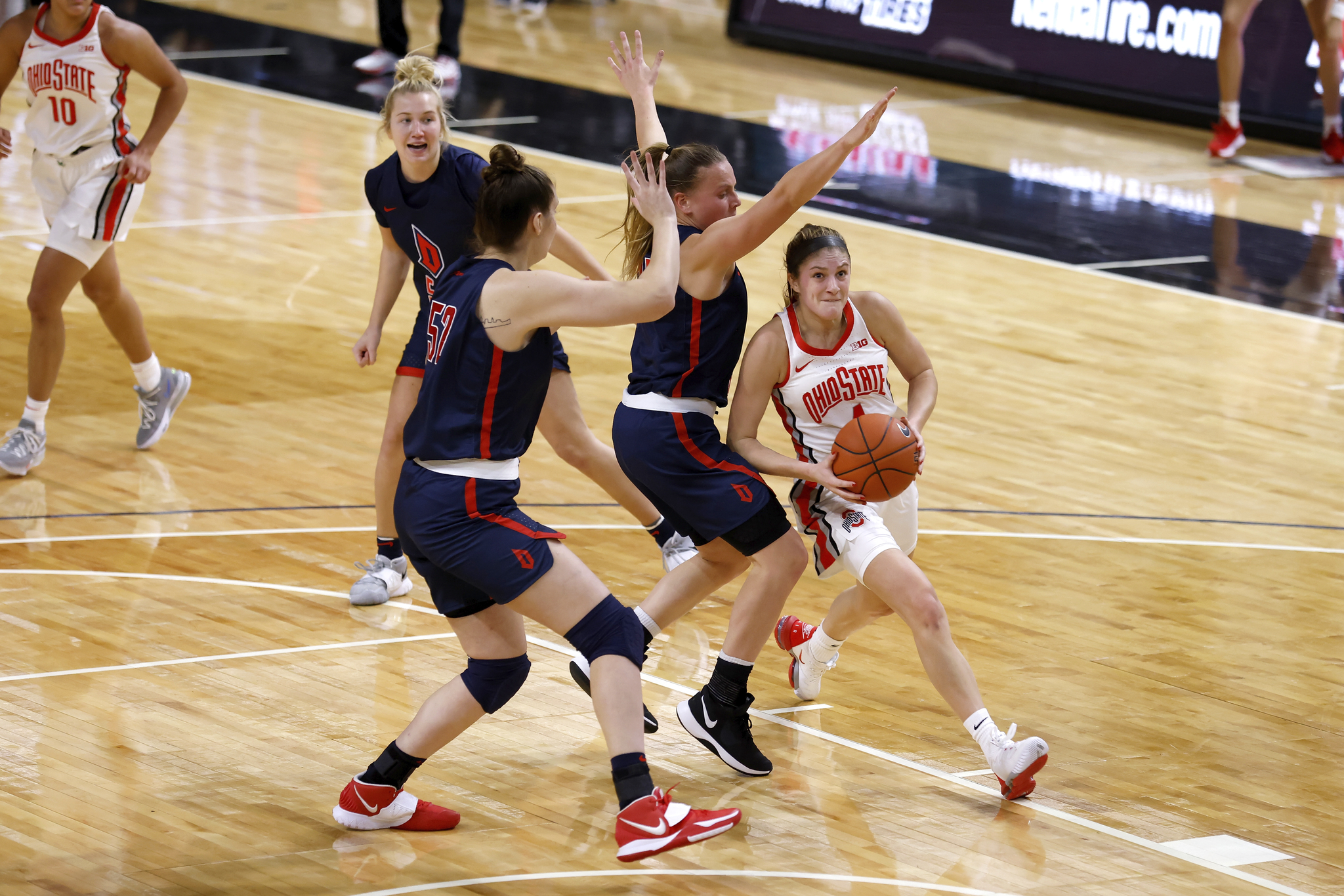 It was not the cleanest performance, but No. 20 Ohio State (1-0) still managed to control its opener against Duquesne (0-1), defeating the Dukes 82-47, holding a double-digit advantage for the final 27:08 of the game in front of an attendance limited to media and coaching staff.

The Buckeyes took a 36-17 halftime lead and never looked back, starting the third quarter on a 13-4 run and cruising the rest of the way. Sheldon led the team with a game-high 20 points on 8-of-13 shooting, with senior guard Braxtin Miller not far behind, netting 16 points and making 5 of her 11 attempts.

But it was not a flawless performance for Sheldon, who committed three early turnovers before getting into the rhythm of the game and avoiding another turnover throughout the final three quarters.

“She had those turnovers which are uncharacteristic of her, and I got on her and told her to kind of settle in and play aggressively within what we do,” head coach Kevin McGuff said. “I thought as the game went on she played really well.”

All 11 Ohio State players active for this season saw time on the court, with every player scoring except for freshman guard Anyssa Jones, who was the last to enter the game.

One of those players who saw time was Rikki Harris, a redshirt freshman who missed last season recovering from a shoulder injury after missing significant time in high school for a variety of other injuries. Harris finished with seven points in 14 minutes during her first on-court action for the Buckeyes.

Despite the lopsided win, junior forward Dorka Juhasz did not have her strongest performance, hitting just 4 of her 13 attempts from the field while also turning the ball over three times. She did manage a double-double though with 10 points and 12 rebounds on the afternoon.

“I thought she got really good shots, and just didn’t make them to the level that she’s capable of,” McGuff said. “But she took open threes, she posted up aggressively and got the ball around the basket, she got to the free-throw line, and I think if she continues to get those shots, she’s going to score a lot of points for us.”

The Buckeyes held Duquesne to 14-of-62 shooting (22.6 percent), including a first half in which the Dukes hit just 4 of their 28 attempts, missing all 11 shots from behind the arc for a paltry 14.3 shooting percentage. Duquesne ended up hitting on just one of its 22 threes (4.5 percent) for the contest.

“That was the focus, I’m surprised it worked,” McGuff said about Ohio State’s three-point defense. “Unfortunately, I can’t tell you that it was all because our defense was there contesting shots. I think we were on some, but they got too many open ones that they just happened to miss.”

On the other end, Ohio State shot 50 percent from the field (33 of 66), but had similar struggles from three, making just 3 of 14 (21.4 percent) and missing its first five attempts before Harris hit the first three of the game for either team with 11 seconds left in the first half.

Next up, Ohio State will take on Kent State in a noon game at home on Dec. 2.