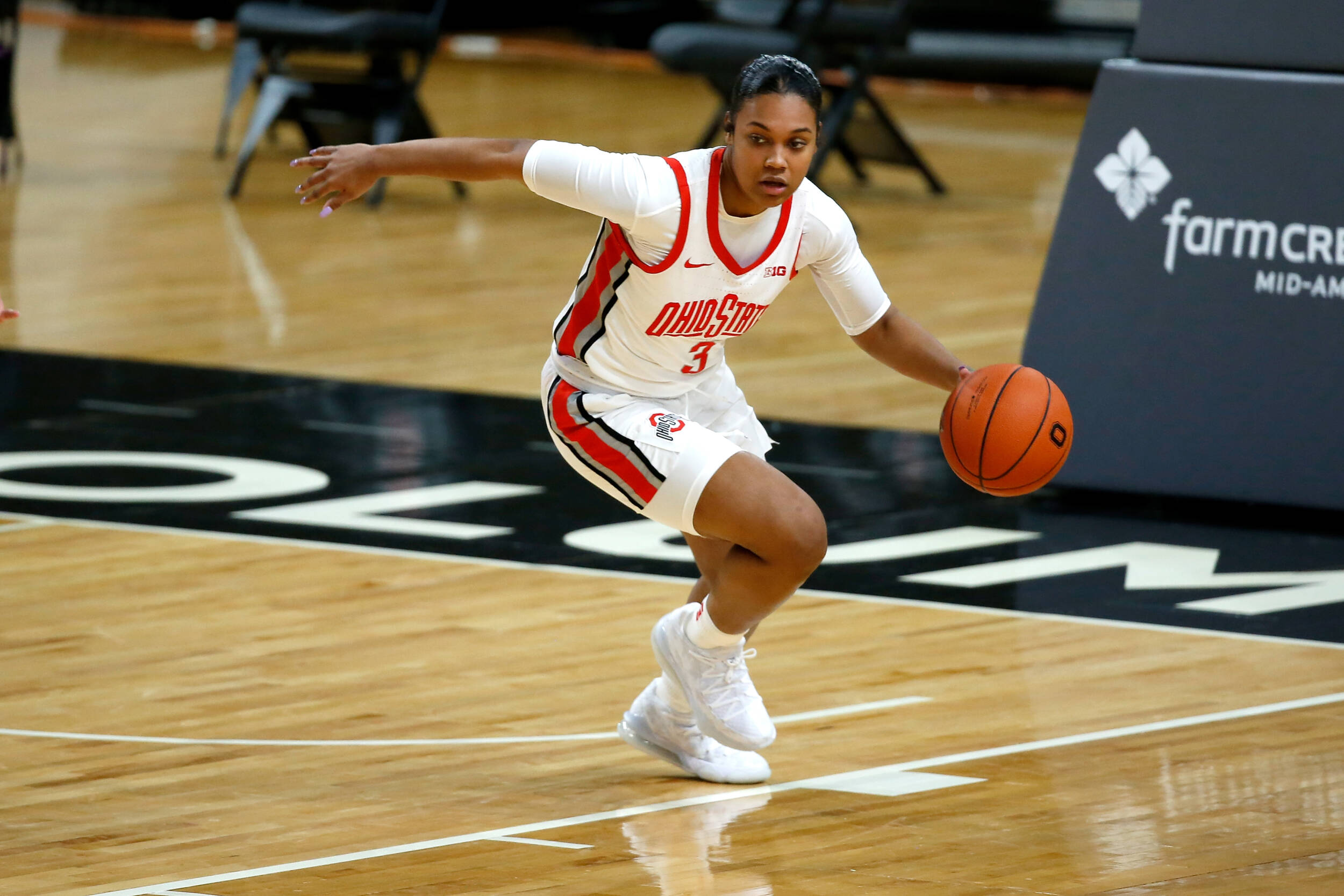 With two games under its belt, No. 19 Ohio State (2-0) has yet to sweat out a matchup, once again handling business in a 103-47 rout over Kent State (0-1) that was pretty much over before the first quarter horn sounded.

That couldn’t be said a season ago, when the Buckeyes held off the Golden Flashes in a 72-62 victory during a 2019-20 season in which Kent State won a share of the MAC East.

This time around, though, even with four Kent State starters returning from last year, Ohio State stormed out of the gates with a 26-0 lead, holding the Golden Flashes scoreless for the first 8:42 before freshman guard Casey Santoro, the younger sister of former Ohio State guard Carly Santoro, netted a free throw to end the shutout bid.

From there, Ohio State led 31-4 after the first quarter and 52-14 at halftime, holding Kent State to 4-of-37 shooting (10.8 percent) overall, including eight misses from three on eight attempts.

“I thought we obviously started with really good defensive energy, and so we were playing really well on that end of the floor, and I think Kent State, they missed some shots they might have been able to make early, so kind of a perfect storm there to start the game,” Ohio State head coach Kevin McGuff said following the win. “I did like the mentality we had defensively, and that led to a lot of easy transition baskets for us to start.”

The Buckeyes were also firing on all cylinders offensively, hitting 20 of their 33 attempts (60.6 percent), doing most of their damage inside while still being efficient from deep, connecting on 4 of 6 (66.7 percent) from long range.

“Communication and hitting the gaps have helped us a lot,” freshman guard Kateri Poole said about the defense. “Just making sure that we lock in on that and communicate throughout the game helps us.”

Juhasz ended the game with her second double-double, finishing with 16 points and a team-high 10 rebounds. Despite her numbers, the third-year forward said that she has had to get warmed up to gain some momentum early on this season

“I would say a little rusty. Last game, I missed a couple of shots that I’m capable of making. I think it was just that first game I had to get out of the way,” Juhasz said on her performance through two games. “This game I was a little bit more confident, and obviously we moved the ball really well and my teammates found me a lot of times under the rim, so the credit is for them, too.”

The scoring was evenly dispersed for Ohio State, with five players – Juhasz (16), Sheldon (16), Poole (15), junior forward Aaliyah Patty (15) and sophomore guard Madison Greene (12) – scoring in double figures. The team chemistry was also shown in a 22-to-3 assist-to-turnover ratio, up from the 1-to-1 ratio (15 assists and 15 turnovers) from the opener against Duquesne.

“I think our kids are really sharing the ball and it’s great to see,” McGuff said. “It’s a reflection of our chemistry on and off the court, and that’s a big stat for us.”

On the other end, no Golden Flashes scored 10 or more points, with sophomore forward Nila Blackford’s nine points leading the way.

For the second straight game, all 11 active members of the roster saw action, this time all scoring points, with freshman guard Anyssa Jones scoring her first collegiate basket in the process. McGuff said it has been pivotal to get his young players minutes in the early games.

“It’s such an adjustment from high school to college, and we’ve got some really good young kids that they just need experience, and it’s one thing to talk about what this is going to be like for them, but they need to be in the game,” McGuff said. “You can see their talent, and if they can just continue to get better and get this experience, they’re going to be really great players for us.”

Next up, Ohio State stays home Sunday for a game against Northern Kentucky, who currently sits at 0-2 on the season. And despite a pair of victories by 35 points or more, McGuff still sees areas for this team to improve.

“One, rebounding. I don’t think we rebounded the ball nearly well enough for us to be the team we’re capable of being,” McGuff said. “Also, even though we scored 100 points, at times we were still kind of jogging up the court, and I’m not necessarily wanting them to feel like they need to shoot a quick shot all the time, but we need to be relentless with our pace in terms of putting pressure on the defense to get back, and we were for most of the game, but certainly not all of the game. So those are two areas for sure where I think we need to improve.”