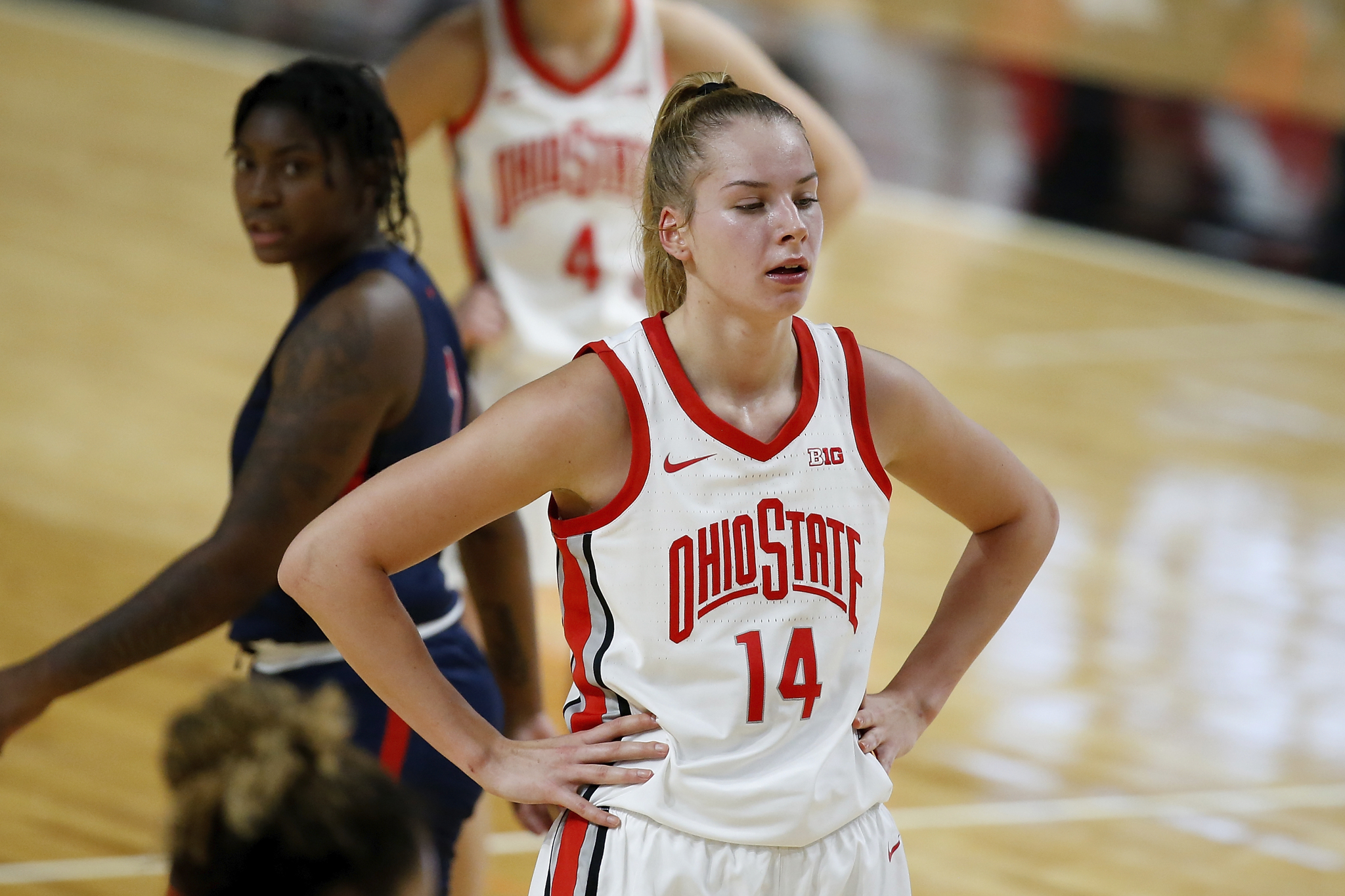 Ohio State women’s basketball battled with Penn State from start to finish, with neither team leading by double-digits after an early Buckeyes lead.

Ultimately, it was the Nittany Lions who held on to the upset, taking down the Buckeyes 69-67 to give Ohio State its first back-to-back losses on the season.

With Ohio State trailing by one heading into the second half, the two teams traded baskets before a three by freshman guard Kateri Poole sparked an Ohio State 7-2 run that gave the Buckeyes a 43-39 lead.

But that was the largest lead for either team in the frame, with the Buckeyes taking a 52-51 lead into the final quarter of play.

The teams traded five-point runs to open the fourth quarter, and then it was sophomore guard Jacy Sheldon who began to heat up offensively. Sheldon, who missed her first five attempts from deep to start the game, hit a pair of threes within a 1:07 span to keep Ohio State in the lead up 63-58 heading down the stretch.

But Penn State fought back, going on a 9-2 run following the Sheldon makes to take a 67-65 lead on a three by guard Niya Beverley, who had a career-high 21 points on 9-of-11 shooting.

“We had chances where we made a few shots there and Jacy got hot from the three late,” head coach Kevin McGuff said. “We just didn’t string that together with stops.”

Ohio State tied the game back up at 67 on a pair of free throws by Poole, who earned them after hitting an in-bounds pass off the back of Penn State forward Johnasia Cash and drawing a foul.

The Nittany Lions again countered, taking the lead back on a layup by guard Makenna Marisa with 1:01 to go. Ohio State had two more opportunities, one with 2.3 seconds remaining, but it could not get a shot off on either attempt to fall by two points on the road.

“We had a play where it could be Dorka or Jacy,” McGuff said on the play call in the final seconds, “but they defended it pretty well.”

Beverley, Marisa (17) and Cash (16) scored 54 of Penn State’s points in the contest, shooting a combined 23 of 43 from the field. Marisa also added eight rebounds and eight assists.

Juhasz was coming off a career-worst one point-performance against Michigan where she missed all eight attempts from the field. Against the Nittany Lions, she bounced back in a big way, finishing with a double-double of 21 points and 11 rebounds while shooting 10 of 16 from the field.

“That game, I personally didn’t play how I wanted to and I didn’t contribute enough to the team,” Juhasz said. “I just switched my mentality from that loss and I just got some shots up and got my confidence back.”

Ohio State opened the game on a 15-2 run in the first 4:05 of the first quarter, thanks in part to Juhasz, who had 10 of the teams first 17 points, hitting on all five of her opening field goal attempts.

Penn State bounced back from that early deficit to go on a 22-5 run to take a 26-22 lead, the team’s first of the game. From there, the Nittany Lions held a 31-30 advantage at halftime after a buzzer-beater make by Sheldon was ruled as no good after a lengthy review.

“I thought in the beginning we got out to a lead, then we had a lot of good shots in the first half,” McGuff said. “We just didn’t finish.”

For the third straight game, the Buckeyes were without sophomore guard Madison Greene, and again Poole earned the start. While she scored just seven points, she filled up the box score in other ways, adding five rebounds, seven assists and three steals.

Next up, Ohio State comes back to Columbus to take on No. 11 Indiana, who the Buckeyes defeated on the road 78-70 on Jan. 28. That game takes place at 3 p.m. Saturday on Big Ten Network.

Juhasz said she is hoping this loss will light a spark in the team as Ohio State heads into the final stretch of the season.

“These two losses were a nice slap in the face, and I think, hopefully, this is our wake-up call, and we can finish our season how we want it.”