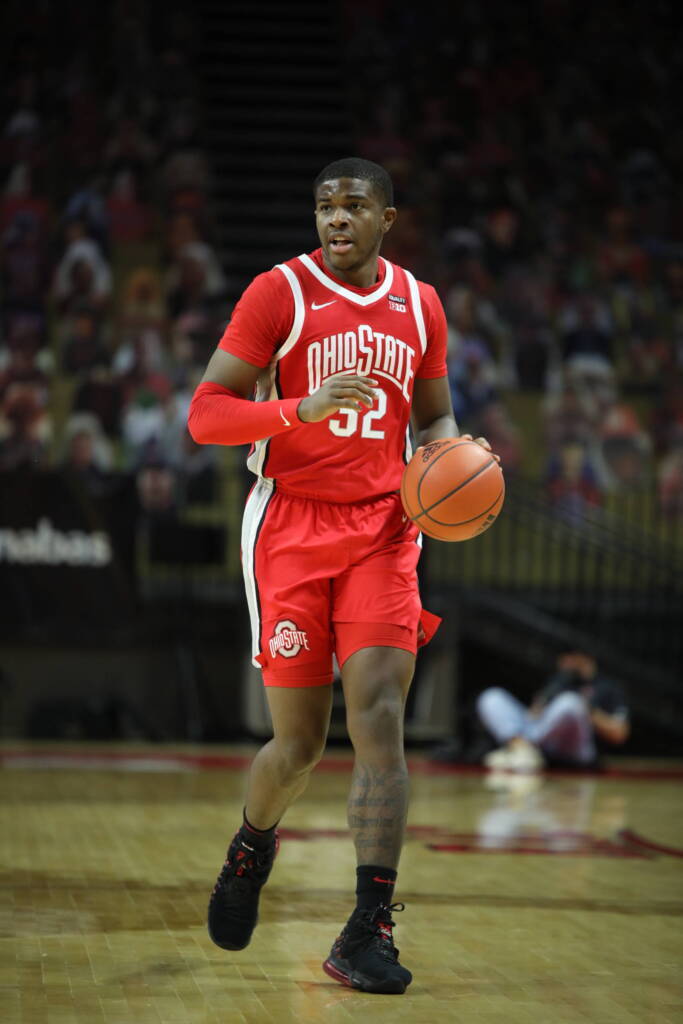 “As a team, we were really disciplined. We executed really well on defense and on offense, we took really good shots,” said Ohio State senior forward Seth Towns, who enjoyed donning the anthracite alternate jerseys. “And then, the jerseys definitely had something to do with it. We all felt it when we put the jerseys. We all felt these superpowers come in us, and we played and we didn’t hold back from it the entire game.”

Wisconsin cut the Ohio State lead to 34-28 on a three-pointer by fifth-year senior guard D’Mitrik Trice just 1:35 into the second half.

After the Badgers cut the deficit to six, Ohio State rallied on an extended 12-5 stretch, led by seven points from Liddell, a strong take by senior forward Kyle Young, and capped by a three-pointer from junior wing Justin Ahrens to take a 46-33 lead with 15:11 left.

In his first game back from a hand injury, fifth-year senior guard C.J. Walker put the Buckeyes up 51-38 with 13:12 on the clock, but the Badgers did not give up at home. Wisconsin ripped off a 9-2 run highlighted by five points by fifth-year senior forward Micah Potter to cut the deficit to 53-47 with 10:21 to play.

Liddell scored through contact to push the lead to 59-50 with 6:11 left, and Wisconsin scored five straight points to cut the deficit to four with 5:24 on the clock.

“Kyle’s and-one was critical when they cut it to four, but that was a critical possession for us, a really critical possession,” Ohio State head coach Chris Holtmann said. “I very nearly called a timeout; we had two timeouts. I was debating on whether or not to call the timeout, and our guys just played. (Fourth-year junior wing) Justice (Sueing) made a nice pocket bounce to Kyle, and Kyle was able to finish with the and-one.

The Badgers responded to Young’s old-fashioned three-point play with a three-pointer by fifth-year senior wing Aleem Ford to cut the lead back down to four with 4:37 left.

“It took everybody to stay connected and just be together as a unit instead of like everybody becoming individuals,” Liddell said. “Because they had their run, (Ford) hit three big threes in a row, and then we just had to stay together.”

A pair of foul shots by junior guard Duane Washington and Walker with a mid-range jumper by Walker put the Buckeyes back up 10 with 1:19 left.

Wisconsin was able to cut the lead to 68-62 with 53 seconds left, but stellar free-throw shooting down the stretch with Washington knocking down a pair and Liddell hitting all four of his attempts.

In the first half, Walker found freshman center Zed Key for an alley-oop slam to push an early Buckeye lead to 11-3 with 15:39 until halftime.

The Badgers battled back, but Towns helped the Buckeyes hold off the home team by sparking a stretch of five straight field-goal makes from 12:07-8:24. Towns hit three of the shots, and Sueing knocked down one and Washington connected from deep to push Ohio State’s advantage to 24-13 with 8:24 until intermission.

A 7-3 stretch by Wisconsin cut Ohio State’s lead to 27-20 with 3:14 until the midway point, and Liddell answered with a strong and-one finish over Potter, a former Buckeye, to put the Bucks up 10 with 2:58 until halftime.

After being held scoreless through the opening 14:17, Wisconsin leading scorer, Trice, rattled off nine of the Badger’s final 10 points of the first half.

Towns, who scored eight points in the first half, finished with 10 off the bench in 5-of-8 shooting. Ahrens and Washington both scored nine points, and Sueing and Young added eight apiece.

“That was probably as good as we’ve played offensively in our three-plus years against an elite defense,” Holtmann said. “It was really efficient; it was really smart.”

Ford paced the Badgers with 13 points and seven rebounds; Trice had 12 points and eight assists; and Potter posted 11 points with four boards.