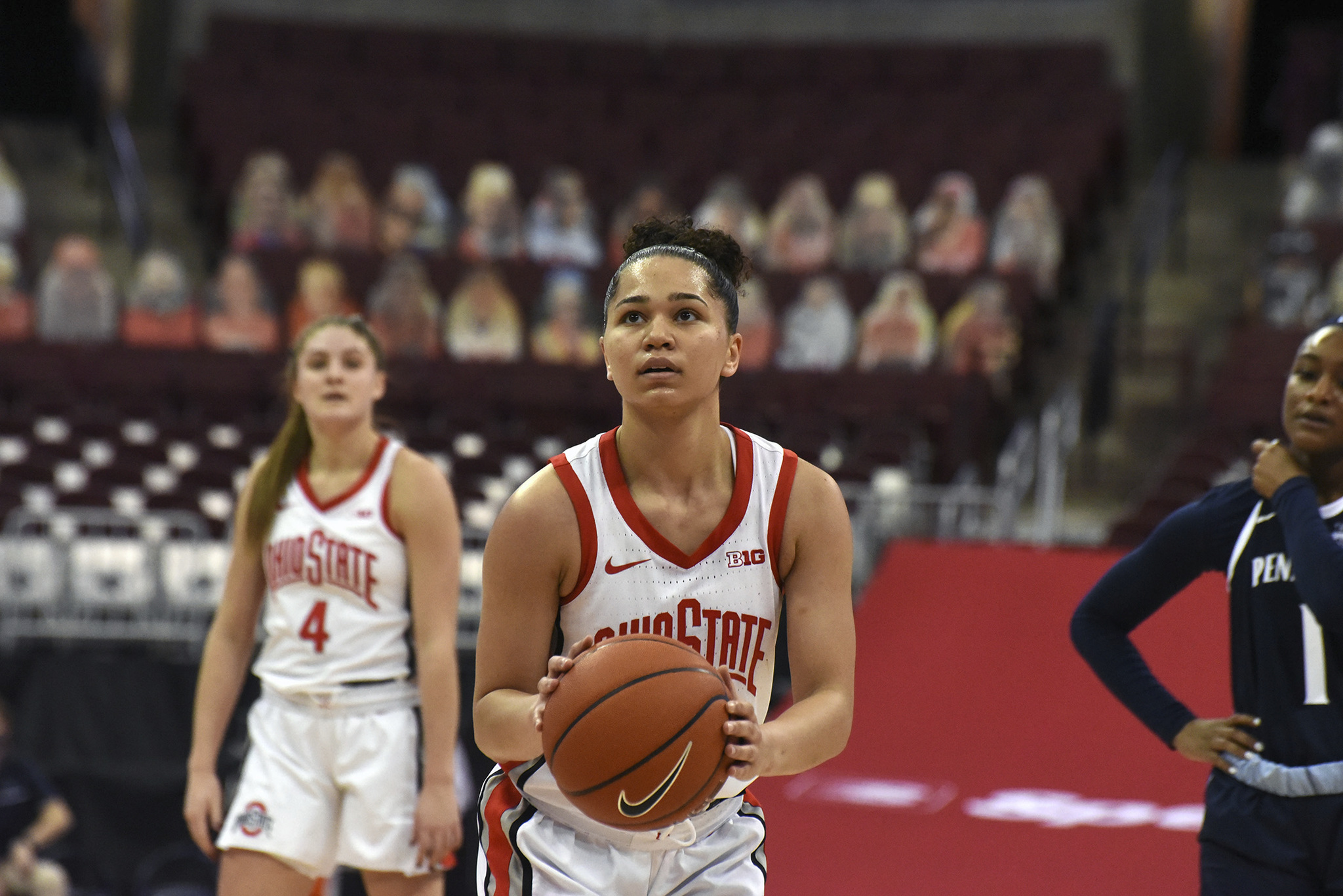 After trailing by three points heading into the third, No. 14 Ohio State capitalized on a pair of big runs in the quarter to take a 62-60 lead over No. 7 Maryland into the final quarter of play.

To start the fourth, Maryland went on a 7-0 run to regain a five-point advantage, with five of those points coming from Preseason All-Big Ten guard Ashley Owusu, who led Maryland with 33 points, six rebounds and nine assists.

But the Buckeyes dominated in the middle of the fourth, going on a 21-5 run in the final frame to win 88-86, snapping Maryland’s 10-game win streak and 21-game regular season win streak in the Big Ten dating back to last season.

“They’ve got a great team and they’ve been playing exceptionally well this year, so I knew this was going to be a real challenge for us of course,” Ohio State head coach Kevin McGuff said. “I think it was a great game, both teams played really well, both teams made big plays, I just think we made a couple more down the stretch to give us a chance to win.”

Just when it looked like the Terrapins were about to pull away and make it 11 wins in a row, Ohio State went on a 13-2 run, first with seven straight points by sophomore guard Jacy Sheldon, then with back-to-back threes by senior guard Braxtin Miller, to take a 75-69 lead with 4:22 to go.

“I was just trying to help and play hard,” Miller said on her six-point run. “I think my teammates are awesome, they kind of made me feel the energy in the moment, but at the moment, I was just really locked in, and trying to do anything I could to help the team.”

After an Owusu basket with 6:06 to play that tied the game at 69, Maryland was held without a field goal until Alaysia Styles hit a layup with 1:27 to go.

But, even with the Buckeye lead ballooning to 83-72 with 1:47 left in the game, three Ohio State turnovers late gave Maryland some life, cutting the deficit to six points with 59 seconds remaining. Ohio State held on, though, hitting key free throws down the stretch to hold on to a two-point win.

The trio of sophomore guard Madison Greene, Sheldon and Miller led the way for Ohio State with 24, 21 and 18 points, respectively. Greene (five) and Miller (three) also combined for eight steals to help force 16 Terrapin turnovers, six of which were by Owusu.

“We knew she was one of the best players on the team, so we just had to stay in front of her and just try to slow her down,” Greene said of Owusu. “We knew she liked to drive to the ball and use her body a lot, so we just tried to focus on that and tried to slow her game down.”

Following a Diamond Miller basket to put Maryland up five at the start of the third, the Buckeyes went on an 8-0 run to go up 44-41. Then, later in the quarter with the Terrapins back up four, Ohio State rattled off a 10-1 run that ended with a three by Greene for a 56-51 advantage.

Miller, Maryland’s leading scorer (17.9 points per game) coming into the contest, was mostly held in check, finishing with 10 points on 4-of-9 shooting.

Senior guard and Harvard transfer Katie Benzan has been a key addition for Maryland all season, leading the team with 43 three-point makes on a blistering 50.6-percent shooting from behind the arc.

She continued that hot shooting against Ohio State, hitting on 5 of her 7 attempts from three in the first half for a game-high 15 points. She finished with 22 points and seven made threes.

Benzan was the big reason for Maryland’s 39-36 halftime lead, as was a 11-0 Terrapin run in the second quarter that gave Maryland a 31-29 lead. But the Buckeyes stayed in it much in thanks to Greene, who had 13 points and four steals in the opening 20 minutes.

Junior forward Aaliyah Patty was listed as a game-time decision for the Buckeyes as she deals with a shoulder injury, but she did not play for the second-straight game.

Next up, Ohio State continues its stretch of ranked opponents with a road matchup against No. 16 Indiana. That game takes place at 8 p.m. and can be watched on the Big Ten Network.

The Hoosiers are one of four teams with just one loss atop the Big Ten standings, with Ohio State, Maryland and Michigan being the other three. The Buckeyes have a chance to beat all three of those teams in consecutive games if they continue the win streak in Bloomington.

“I think our competitive character is as good as its been probably since I’ve been here, these kids really fight and scratch and claw and play for each other,” McGuff said. “I think you saw that now in the last couple of games for sure, and that’s how you beat a team as good as Maryland. They are a great team and we were going to have to play extremely well, and I think for the most part we did.”