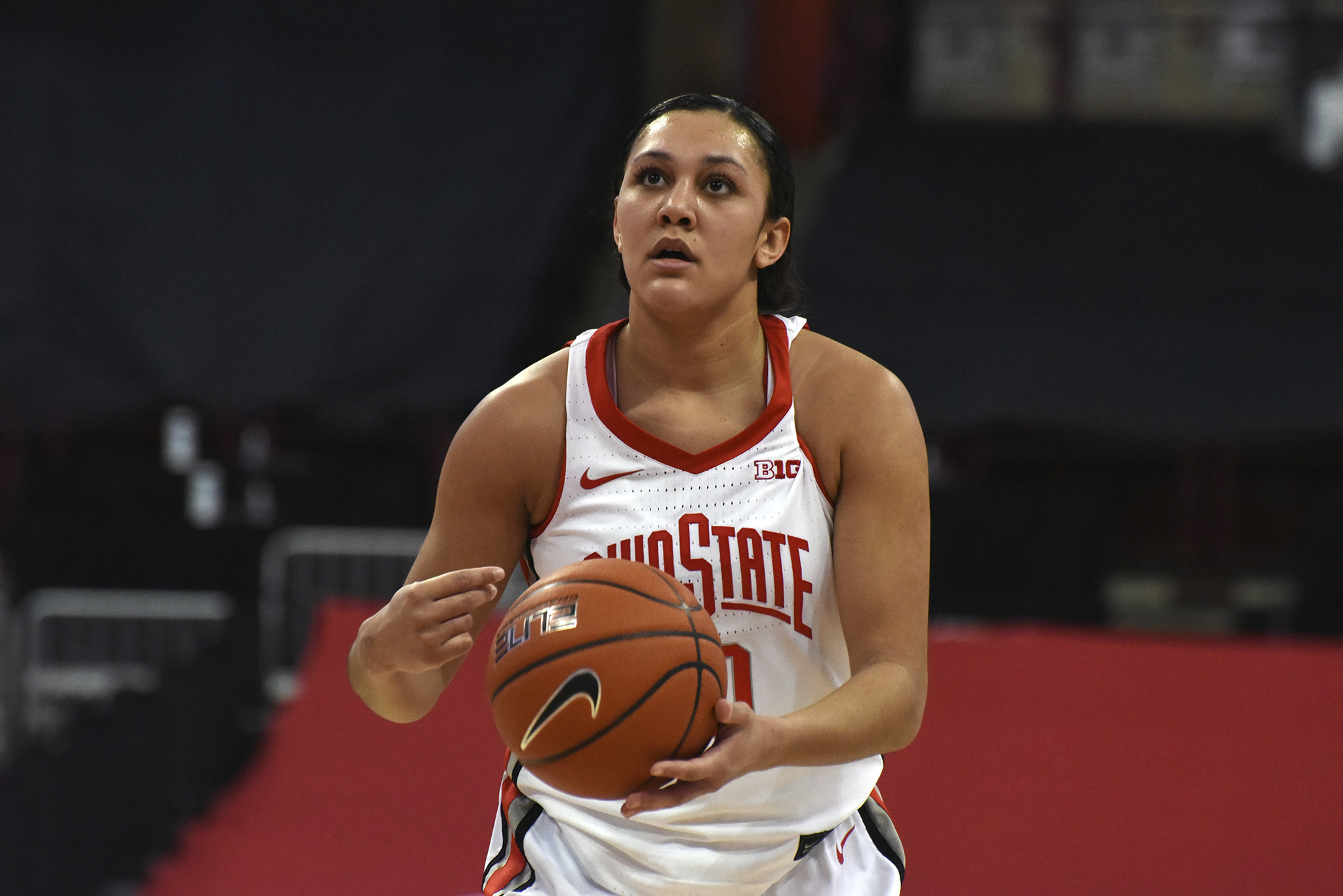 In the win over then-undefeated Michigan, sophomore guard Jacy Sheldon led the way with 20 points for Ohio State. Against Maryland, who had won 24 straight against the Big Ten, sophomore guard Madison Greene led the Buckeyes with 24 points in the 88-86 victory on Jan. 25.

Those two guards have often been the heroes for this team early on this season, but Greene and Sheldon combined to miss their first 13 shots from the field in Thursday’s contest against Indiana, finishing the game a combined 1 for 15.

Still, the Buckeyes continued to stay in the game against Indiana, and thanks in part to a 25-point effort by senior guard Braxtin Miller, Ohio State took down Indiana 78-70 for the Buckeyes’ third straight victory over a ranked opponent.

The three-game stretch over ranked teams is tied for the longest in program history, matched only by the 1992-93 team during its run all the way to the championship game.

“Really just proud of our effort,” head coach Kevin McGuff said. “We got off to a slow start, obviously, but our kids hung together, showed some toughness and some grit, and ultimately played really well to beat a great team on the road here.”

Ohio State trailed the Hoosiers 54-53 heading into the fourth quarter and were shooting just 33.3 percent (18 of 54) from the field through the first 30 minutes of play.

Sheldon’s first make of the game at the end of the third quarter led the start of a 13-0 run that had the Buckeyes hold the Hoosiers scoreless for the first 4:46 of the fourth quarter to take a 64-54 lead.

Indiana followed that with a six-point stretch to cut the deficit down to four, but the Buckeyes countered that with a 7-0 run to go back up 11, and held on the rest of the way for a eight-point victory to move to 10-1 overall and 6-1 in conference play.

Along with Miller, junior forward Dorka Juhasz had a strong bounce-back performance after an eight-point showing against the Terrapins, finishing with a double-double of 19 points and 12 rebounds.

“Obviously Maryland, I wasn’t really great on offense, I tried to focus more on my defense, rebounding,” Juhasz said. “I came out different this game, and I kind of stepped up a little bit on offense to help my team.”

It looked like this game had the potential to be over quickly once Indiana opened up the game on an 11-0 run, holding Ohio State scoreless for the first 4:05 as the team missed all of its first eight shots. But Ohio State rallied with an immediate 9-1 run and trailed by just five points, 20-15, after the first quarter of play.

McGuff said there wasn’t any real tactical changes that Ohio State made after going down by double digits out of the gates.

“Really just start playing,” McGuff said. “I don’t know that it was anything schematically we weren’t doing, we just didn’t have the same focus that we normally have, and so just had to get a timeout there and get them reorganized and just go from there.”

The Buckeyes trailed the Hoosiers 40-39 at halftime after a layup at the buzzer by Indiana sophomore forward Mackenzie Holmes, who had 11 points in the opening 20 minutes. Ohio State was led by Miller, who finished the half with a game-high 16 points and five steals.

Miller finished the game with five rebounds and five steals to go along with her 25 points on 9-of-16 shooting.

“She was really efficient,” McGuff said. “Our team executed really well in the second half, and I think she was a big part of that. Madison and Jacy didn’t have their normal nights so we really needed her to step up, and she did a great job. It was a great game for Braxtin.”

Indiana was led by junior guard Grace Berger, who finished with 26 points and 10 rebounds in 37 minutes. She shot 8 of 15 from the field and was 10 of 14 from the free-throw line.

Junior forward Aaliyah Patty returned to the lineup after missing the past two games with a shoulder injury. She finished with 13 points in 28 minutes, and Juhasz said it was very important to have her back after the absence.

“It helps a lot, just for me. it kind of takes off the pressure of me, too, because I know that I can always count on her going for rebounds, and I think we had some great connections today,” Juhasz said. “It was really good to have her back, she still has to get a little bit back in after her injury, but I think she played great, I think she played really tough today, and obviously she’s a very important piece of our team.”

Next up, Ohio State finishes its current run of ranked opponents with a road matchup against No. 23 Northwestern. That game takes place at 8 p.m. Monday.