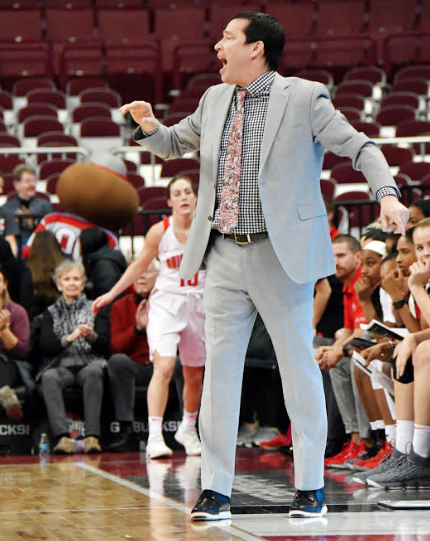 Without its top scorer and rebounder as freshman forward Dorka Juhasz (12.1 points and 8.3 rebounds) sat near the end of the bench in a gray sweatsuit, out for the night with a sprained ankle, the Ohio State women’s basketball team fought on Thursday at Value City Arena in Columbus.

The Buckeyes picked up the slack with graduate guard Carly Santoro’s game-high 23 points and team-high six rebounds, followed by freshman forward Aaliyah Patty’s nine points on 4-of-7 shooting, nearly taking down the No. 11 Terrapins before running out of gas in a 70-57 defeat.

The loss for OSU (7-10, 3-5) was unable to avenge its 75-69 result Jan. 5 at XFINITY Center in College Park, Md., eight days and three games into the Big Ten slate for both teams. UMD (17-2, 6-2) rode Stephanie Jones (20 points) and Massillon (Ohio) Jackson product Taylor Mikesell (14 points) in double figures to pull off its latest survival.

“I thought that, for the most part, we played hard, physically, and in the first half, really competed with great competitive character,” said head coach Kevin McGuff. “But in the second half, when things didn’t go our way — I thought we continued to play hard, but mentally, we allowed some of those mistakes to really carry over to the next play, the next play and allowed Maryland to go on runs.”

Maryland jumped out in front 5-0 in the first 55 seconds on Mikesell’s three-pointer and Shakira Austin’s layup, extending its lead to 8-2 just 2:15 into the game with Patty’s layup at the 8:07 mark as Ohio State’s only bucket. The Buckeyes tore the Terrapins for a 9-0 run with points from Patty, Crooms and Santoro for an 11-8 edge before a back-and-forth final 3:59 resulted in an 18-18 tie to close the frame.

UMD started the second quarter, a slow frame for both teams, with the first five points again — on Mikesell’s triple 32 seconds in and Jones’ jumper at the 7:09 mark — before OSU answered on layups from Santoro and Patty to stop the drought and make it 23-22 into the 3:53 mark. Another blow-for-blow finish ensued over the last 3:21, yielding to Maryland’s 30-24 advantage with 2:24 to go before Ohio State chipped the deficit to 32-28 at halftime on layups from Santoro and Grande.

After the Terrapins opened the third quarter on a 6-3 spurt to take a 38-31 advantage 1:02 into the frame, the Buckeyes responded with a 7-0 run that feature five straight points from Santoro to even the 38-38 score at the 6:22 mark. UMD retook the lead and stretched the margin back to 45-38, but OSU answered once more on an 8-3 spurt to close the gap to 48-46 at the 2:21 mark after fifth-year senior forward Makayla Waterman’s layup.

Maryland, however, surged into the fourth quarter after its 6-0 run in the third quarter’s last 1:51. The momentum spilled into the game’s final 10 minutes, where the Terrapins scored the first seven points and stretched their run to 13-0 until they surrendered Ohio State’s basket at the 5:57 mark on graduate guard Adreana Miller’s corner triple that made it 61-49.

The Terrapins traded buckets with the Buckeyes before pushing ahead in the last 5:36. UMD put OSU away with a 9-8 edge en route to the 70-57 final.

“I don’t want to use the word ‘frustrating’ because we can’t get frustrated, no matter what,” Santoro said. “We just have to keep working.”

Ohio State returns to action Monday at Minnesota. The game, from Williams Arena in Minneapolis, is set for 7:30 p.m. ET on Big Ten Network.