NFL RECAP: How Did The Buckeyes Around The League Do In Week Eight? 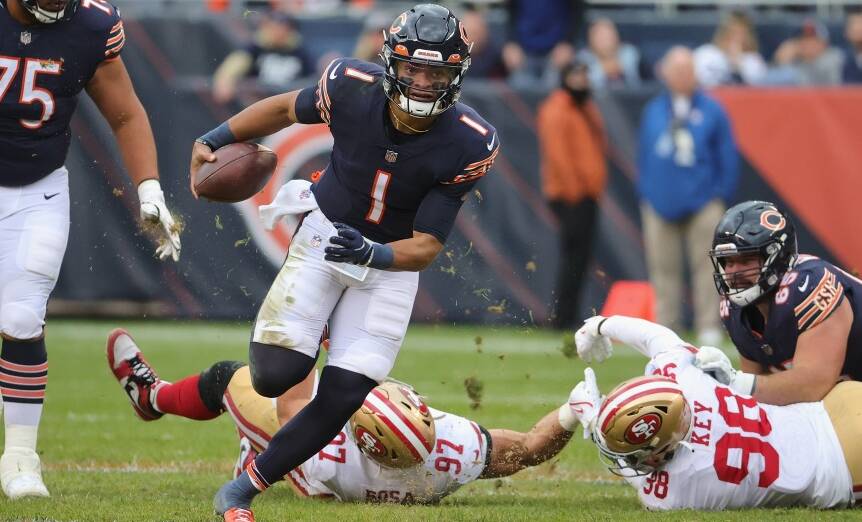 Chicago Bears quarterback Justin Fields played the best game of his brief NFL career in a 33-22 loss to the San Francisco 49ers Sunday afternoon. The first-year signal-caller completed 19 of 27 passes for 175 yards, a touchdown and an interception. He also ran the ball 10 times for 103 yards and a score.

Fields’ best run of the game came with the Bears down a touchdown in the second half. On fourth and short, the former Buckeye eluded multiple defenders and scampered 22 yards for a score.

Although the Bears didn’t win the game, Fields looked the part of a franchise quarterback and gave Chicago another reason to believe in him.

For the 49ers, Nick Bosa recorded a multi-sack performance with three tackles for loss.

Columbus is a professional sports market that consists of several different fandoms. The chances are if you call Ohio’s capital city home, that you cheer for the Browns, Bengals or Steelers. Therefore, Sunday was either excruciating (Browns and Bengals) or joyous (Steelers).

On the Browns’ opening series, Heyward took the edge opposite of linebacker T.J. Watt. Both players powered through the Cleveland offensive line and slammed into Baker Mayfield, who tried to step up the pocket to avoid the pressure, ultimately falling for a loss.

Here is the other sad game for Ohio sports fans. Last week, the Cincinnati Bengals blew the Baltimore Ravens out of the water, only to lose 34-21 to the New York Jets on Sunday afternoon.

Still, it wasn’t all bad for the Bengals. Former Buckeyes Von Bell and Sam Hubbard played well for the orange and black. Bell tied his season-high with nine tackles while also recovering a key fumble that he forced in the second quarter. The turnover resulted in a field goal for Cincinnati.

Hubbard finished the game with six or more tackles for the fourth time this season. He also recorded a tackle for loss and broke up two of New York quarterback Mike White’s passes.