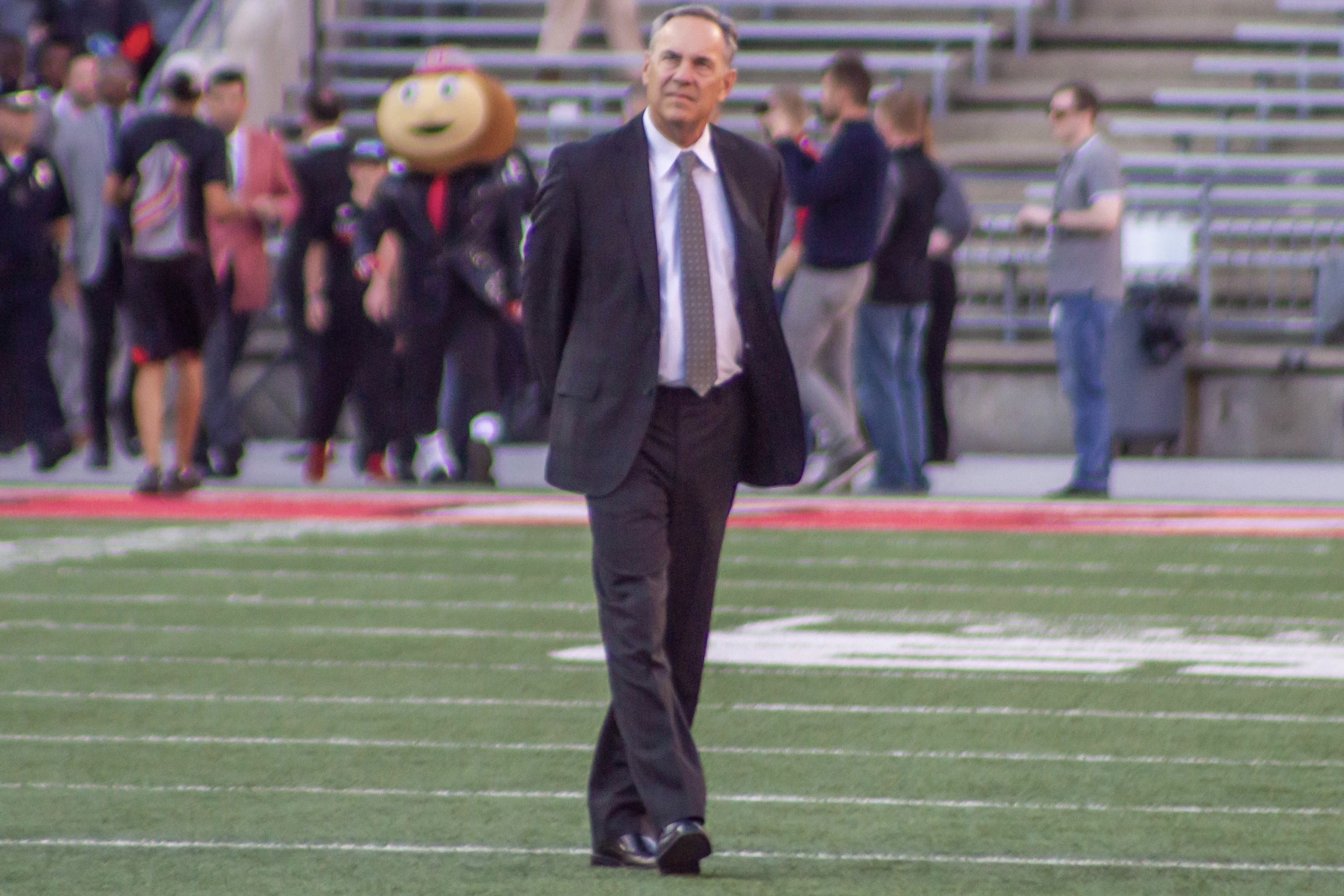 On Feb. 4, Mark Dantonio stepped down as Michigan State head coach after 13 seasons with the job, ending his tenure with the most wins by a head coach (114) in program history.

With his departure came immediate rumors that the top candidate would be Cincinnati head coach Luke Fickell, who worked as a special teams coach with Dantonio, who was defensive coordinator at Ohio State in 2002 and 2003.

Fickell continued to be a member of the Ohio State coaching staff until taking the Cincinnati job in 2017, becoming linebackers coach for the Buckeyes in 2004, then adding a co-defensive coordinator tag from 2005-10 before taking the interim head coaching job in 2011 following the departure of Jim Tressel.

After a 6-7 head coaching stint, Fickell went back to his previous position as co-defensive coordinator and linebackers coach for the next five seasons.

Eventually, Fickell announced he was turning down the position, and the eventual hire went to Mel Tucker, who was coming off a 5-7 season in his first year as Colorado’s head coach. Tucker also has ties back to the Buckeyes, working under Dantonio as Ohio State defensive backs coach from 2001-03.

Tucker, who was promoted to co-defensive coordinator, left Ohio State in 2005 for an NFL job as the defensive backs coach for the Cleveland Browns.

With all the ties back to Columbus in one way or another, Buckeye Sports Bulletin reached out to Jim Comparoni, the publisher of SpartanMag.com, Michigan State’s website in the Rivals network.

Was Dantonio’s departure a surprise, and what was the public opinion of Dantonio heading into his decision to leave?

JC: “It was a surprise. There were different factions, there were two sides of the aisle. There were people that thought that the program had gotten stale, and lost faith in Dantonio because he didn’t fire assistant coaches in previous years when they were playing .500 football, and the offense was ineffective.

“Then there were other people on the other side of the aisle that wanted to stick with him because he’s the only guy in many people’s lifetimes who has ever taken Michigan State and consistently had them in the Top 20. It’s only happened, at this level, maybe three times in the history of the program.

“So there were two factions, and they went at it really hard on our message board for a long time, and I mean it went on for more than a year, and it was like listening to Republicans fight with Democrats. I mean it was that polarizing and people losing their temper and everything.

“Some people were looking forward to change, and too other people, the unknown was a little bit dangerous there, but there was also a lot of optimism because initially, it looked like a slam dunk that they were going to get Luke Fickell, and I think both sides were optimistic about that.”

What was the public opinion on Fickell being the primary replacement candidate?

JC: “I think everybody would have been excited about that, they’ve seen that University of Cincinnati is a great proving ground for coaches, it’s like Big Ten lite down there.

“Fickell had coached with Dantonio, Dantonio knew him well, the two families get along, it would have been a clean succession plan. That was Dantonio’s plan, and I don’t know if Dantonio would have retired right then if he hadn’t really believed that Luke Fickell was going to take the job.

“I think that was part of it, and Dantonio wanted to come back one more year or more, but the recharging of the batteries that used to take place after the season, from what I understand just wasn’t quite happening, and that had him teetering a little bit. Now he claims some of the off-field things didn’t have something to do with it, I think it probably did, I think that that was just a few more things on the scale to tip the scale that made the timing right.”

“I think the biggest factor (of Dantonio leaving) was I think that he was really shocked, appalled, disappointed the way the fans turned on him. Yeah Michigan State went 7-6 this year, won a bowl game. When he was hired they would have thrown a parade for that, so the program he inherited was not the program standard that he had to aspire to at the end of his career.

“He was a victim of his own success.”

After the Fickell hire fell through, how did Michigan State fans react to the eventual hiring of Tucker?

JC: “The fans are 100 percent behind it because after the Luke Fickell debacle. There were a lot of people that followed it closely that were like ‘Man, Michigan State’s got nowhere to go now, this is a problem.’

“I think fans were panicking and they all were very angry with the athletic director, so the idea of going back and circling back to get Mel Tucker right now, with his record of 0-0 at Michigan State, his approval rating is probably 99 percent. I wrote that it was like saving a baby from a burning barn when they salvaged Mel Tucker.

“I think people get it. They see Mel Tucker as a Nick Saban protégé who also coached with Dantonio for three years at Ohio State, so there is some, it’s not direct succession, it’s a guy from Cleveland who had been a graduate assistant at Michigan State, but they didn’t totally go outside the family to do this, so that part of it makes sense.

“People pause and say, ‘Well wait a minute, he’s 5-7 as a coach, what does that mean?’ My answer to that is, well first of all Luke Fickell was 4-8 in his first year at Cincinnati. Secondly, if Mel Tucker had had a couple of 11-2 seasons like Luke Fickell, guess what? Michigan State wouldn’t get that cat, he’d be at USC right now, right? He’d be somewhere else, he’d be at Florida State or USC or Auburn or something, he wouldn’t be here.”

How comparable are Fickell and Tucker as coaches?

JC: “It’s uncanny how much those two parallel each other.

“Then they both spent one or two years in the MAC — one was at Akron, one was at Miami of Ohio — I think Fickell might have spent two years at Akron, but both had a short stint in the MAC, and then they both went to Ohio State and they were on the same Ohio State staff. They both coached with Dantonio in the national championship year, Fickell was special teams and Tucker was DBs coach. All the way up, Tucker becomes co-defensive coordinator (when Dantonio left Ohio State), right? Fickell is a position coach. Tucker leaves to go to the NFL, so guess who becomes the new co-defensive coordinator? Fickell.

“From that point, Tucker spent 10 years in the NFL, that’s where it changed. He goes 10 years in the NFL, Fickell stays at Ohio State for a total of 15 years. Then, Tucker comes back to college with Saban in 2015, wins a national championship and then goes with Georgia. They’ve both coached for two national championship coaches: Tucker coached with Tressel and Saban. Fickell was an assistant for Tressel and Meyer.

Dantonio, Fickell and Tucker all have ties back to Ohio State as coaches. Is that merely a coincidence, or is that something Michigan State looks to get in a head coach?

JC: “I just think that’s where the talent and the quality is. I think Saban was a DBs guy, he taught Dantonio, Dantonio helped teach these guys.

“You just look throughout history, the state of Ohio has just produced so many coaches, there’s just something in the water down there. I don’t think it’s something they sought.”